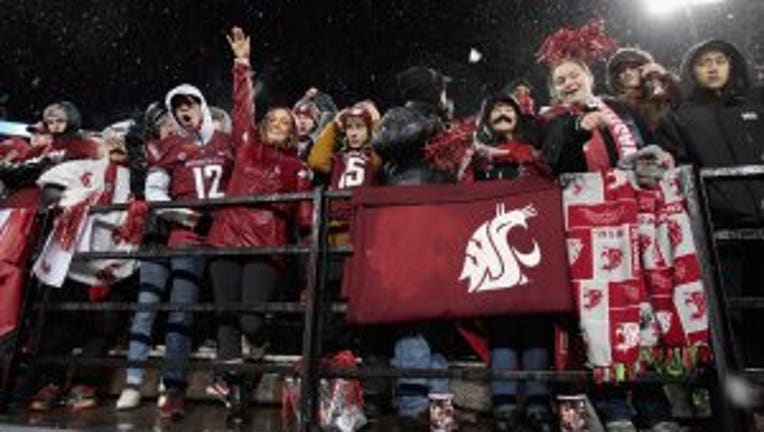 There will likely be no Fiesta for the Washington State Cougars. No Peaches, either.

The Cougars came in at unlucky No. 13, just shy of where they need to be to earn a trip to a New Year’s Six bowl game.

Sure, there is one more round of rankings coming out Sunday after the conference title games, but the odds don’t look good for Wazzu to make up the ground.

The problem for the Cougars is that there are not really 12 spots up for grabs, more like four.

The top four spots go to the playoff teams, which right now would be No. 1 Alabama, No. 2 Clemson, No. 3 Notre Dame and No. 4 Georgia.

The Crimson Tide and Bulldogs, however, play for the SEC title, so one of them will likely be out of the playoff. That would open up a spot for either No. 5 Oklahoma or No. 6 Ohio State, as long as they both win their conference title games.

The Rose Bowl gets the Big Ten and Pac-12 champions, unless one of those go to the playoffs. If that happens, the Rose takes the next best team from that conference. So, if the Buckeyes were to get into the playoff, the Rose would likely take No. 7 Michigan.

The Pac-12 will send the winner of UW and Utah.

The Sugar Bowl does the same with the SEC and Big 12, which means even if the Sooners beat No. 14 Texas in the conference title game and get into the playoffs, that spot would still be filled by either the Longhorns or No. 16 West Virginia.

That brings us to the Peach and Fiesta bowls, where the four spots will be filled by at-large bids. One of those automatically goes to the top-ranked team not in a power five conference, which right now is No. 8 UCF. But even if the Knights lose in their conference title game to Memphis, a Group of Five team will take that spot.

So that leaves three spots, and there are three teams ahead of WSU in No. 9 Florida, No. 10 LSU and No. 12 Penn State who, like the Cougars, are not scheduled to play again until their bowl games.

Any way you look at it, there just seems to be too many teams ahead of the Cougars for them to likely get in. The only teams that could lose this week are either ranked too highly to fall below WSU or would be replaced by another team because of tie-ins.

Sorry Coug fans, but it looks like the Alamo Bowl this year.

If every favorite wins, here’s the most likely scenario based on this week’s rankings: