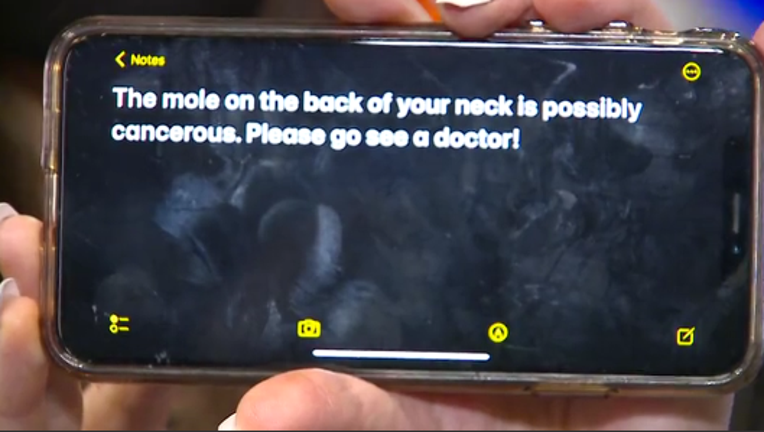 Nadia Popovici held up her phone to the trainer on the other side of the ice, months later it turns out the message likely saved his life. (FOX 13 Seattle)

The Seattle Kraken fan had a seconds-long interaction with Brian "Red" Hamilton, the Vancouver Canucks assistant equipment manager, back in October at the Kraken’s inaugural home opener. On Saturday morning she was fast asleep after working a crisis hotline on New Year's Eve.

Meanwhile, hockey Twitter had exploded as the Canucks put out the word online: Hamilton wanted to find the fan who spotted a mole on his neck from the stands, and implored him to get it checked out by a doctor.

"She didn’t take me out of a burning car, but she took me out of a slow fire," explained an emotional Brian "Red" Hamilton to reporters on a Saturday morning news conference. "The words out of my doctor’s mouth was if I ignored that 4-5 years, I wouldn’t be here."

Hamilton said if there’s video somewhere he was probably in shock as he rubbed his neck and walked away – Popovici tells FOX 13 that she had debated with her Mom what she should do.

"He kept walking by," she explained, adding that she had seats close to the ice. "I just happened to notice the back of his neck because he kept looking away."

Hamilton said it was an intense game, and things had gotten chirpy between some fans and players. The fact that he even turned when Popovici banged on the glass was somewhat lucky – what he saw on the other end was a quick message she’d jotted out on her phone: "THE MOLE ON THE BACK OF YOUR NECK IS POSSIBLY CANCEROUS – PLEASE GO SEE A DOCTOR!"

When he was back in Canada the message was still bugging him – he asked his long-time girlfriend to take a look, where she confirmed something looked off. Hamilton consulted with team doctors, and decided to remove it. Days later a biopsy came back letting him know the mole was cancerous, and that they’d caught it early.

On Saturday night, hours after their story had unfolded on the internet – and Popovici aware of the impact – the two met face to face. She asked if he felt comfortable shaking hands, before he pulled her in for a hug.

"My Mom wants you to know she loves you," he said after they’d spoken for a few minutes.

Despite the face masks in the middle of a pandemic – it was obvious both were smiling ear-to-ear at the chance encounter, and the story that unfolded.

"I nearly cried," she said. "I was just so thankful. It was really his decision to go after reading that message. I’m so proud of him, and the people in his life that encouraged him after this random note from a stranger."

Hamilton, however, said it’s not his story – it’s Popovici. He told reporters that beyond making sure she was aware of the effect she had on his life, he wanted others to be more aware of their own bodies. He called the malignant melanoma "sneaky," noting that everyone needs to be aware.

As for Popovici, she’ll be heading to medical school soon. In the middle of the rematch between the Kraken and Canucks it was announced that a $10,000 grant was heading her way, earmarked for her expenses at medical school.

"I understand I’m part of the story," said Hamilton. "She needs to know that she’s the story."

Hamilton said that Popovici extended his life – and that his family, including his daughter, will forever be grateful.