SEATTLE - A judge sentenced 25-year-old Tyre Wayne Means Jr., to five years in federal prison for helping to set a Seattle Police cruiser on fire and stealing an AR-15 rifle from another police car during the May 2020 riots in Seattle.

At the sentencing hearing, U.S. District Judge Richard A. Jones told Tyre Wayne Means Jr., "Your conduct was reckless, destructive and extremely dangerous to those who were there for peaceful protest."

Means was captured on video on May 30 lighting a paper towel and putting it in the back seat of a patrol while others in the crowd poured accelerants on the flames, eventually setting the car ablaze, according to the Department of Justice.

Means then reached into the rear window of another patrol car and pulled out a rifle bag, prosecutors said. He looked inside and ran from the area.

A subsequent surveillance video on Pine Street, around the corner from where the rifle was stolen, shows Means, Jr., in a fight with another man. While Means, Jr., and the man are throwing punches, an unidentified man picks up the rifle bag and ultimately walks away. Later that day, the rifle was anonymously returned to the Seattle Police West Precinct.

He was also shown live on a Q13 News smashing out a window to a downtown store a then looting it.

Means, Jr., was identified as the suspect in the video by his distinctive clothing, jewelry, tattoos, and association with a female who also had distinctive tattoos and a significant social media presence. Means, Jr., was arrested in Bremerton, Washington, where he was meeting with his Washington State Department of Corrections probation officer. 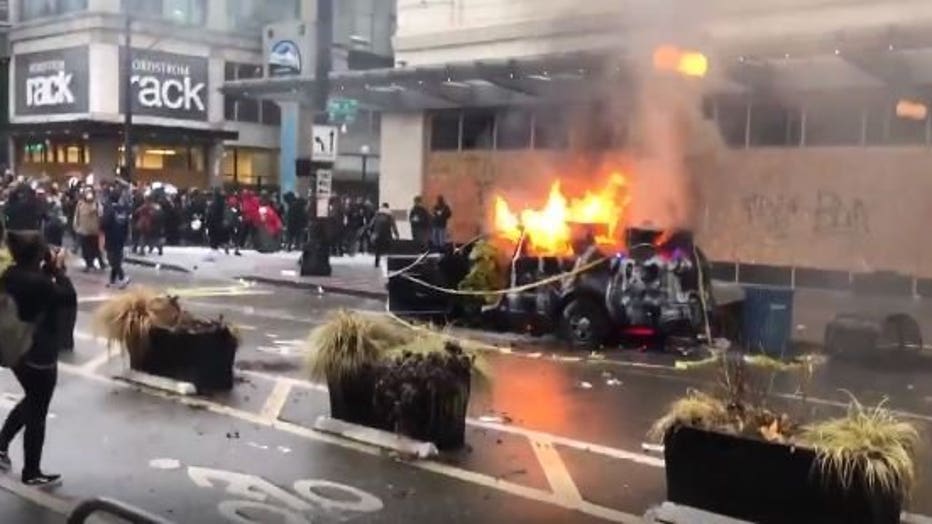 Means, Jr., is prohibited from possessing firearms due to two felony convictions in the state of Georgia: serious injury by vehicle and obstructing law enforcement by use of threats or violence. In Washington, Means, Jr., has a felony conviction for domestic violence that includes a no-contact order–that order also prohibits him from possessing firearms.

"Your conduct was reckless, destructive and extremely dangerous to those who were there for peaceful protest," said Judge Jones.

Acting U.S. Attorney Gorman said the right to peaceful protest is "one of the dearest and most important rights that we enjoy in the United States"

"(Means) is one of a smaller group who chose to abuse the cover of lawful protests to carry out acts of violence," Gorman said.