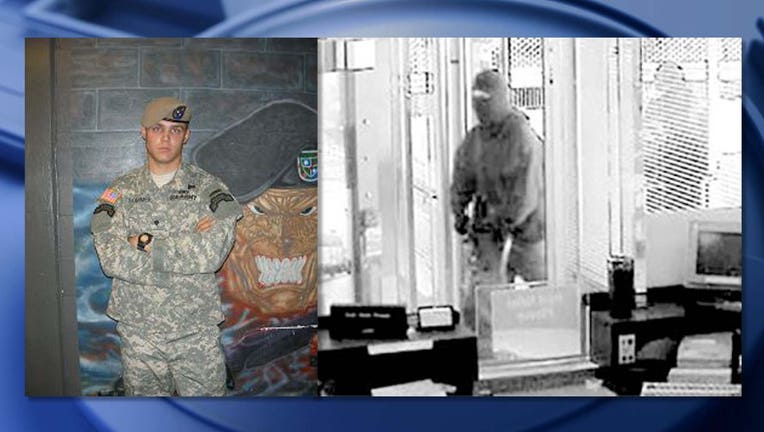 SEATTLE - A former Army Ranger who led the "military-style robbery" of a Tacoma bank in 2006 had his prison sentence reduced Wednesday, dropped from 43 years to 31.

According to U.S. Attorney Nick Brown, 36-year-old Luke Elliott Sommer was first sentenced to 24 years in prison on Dec. 12, 2008 for the robbery of a Tacoma Bank of America in 2006.

Sommer and four conspirators—armed with machine guns, handguns, grenades and body armor—stormed the bank branch and stole $50,000. They were identified by the license plate on the back of their getaway car.

In Jan. 2009, barely a month after he was sentenced, Sommer started looking to hire a hit man to kill the Assistant U.S. Attorney. Undercover officers got in touch with Sommer, and he explained he wanted news reports of this hit to show it "was a murder, not an accident."

Then on Jan. 23, 2009, Sommer used a prison-made knife to get into the unit one of his conspirators was being held in, then attacked him until he was pulled off by prison staff.

His prison time climbed to 43 years, but in the decade since, a U.S. District Judge posited that Sommer has rehabilitated greatly behind bars. His sentence was dropped to 31 years after petitioning the court.

"Luke Sommer told the court, and the victims of his crimes, that he had truly changed and expressed his sorrow for his actions," said Brown. "He claims to be committed to working on his reform and doing what is right – he now has more than a decade to demonstrate that commitment while he remains incarcerated."

Bureau of Prisons staff indicated to the court that Sommer has "worked hard to do the right thing while incarcerated." In reducing Sommer's sentence, the judge said "punishment is not vengeance or retaliation."