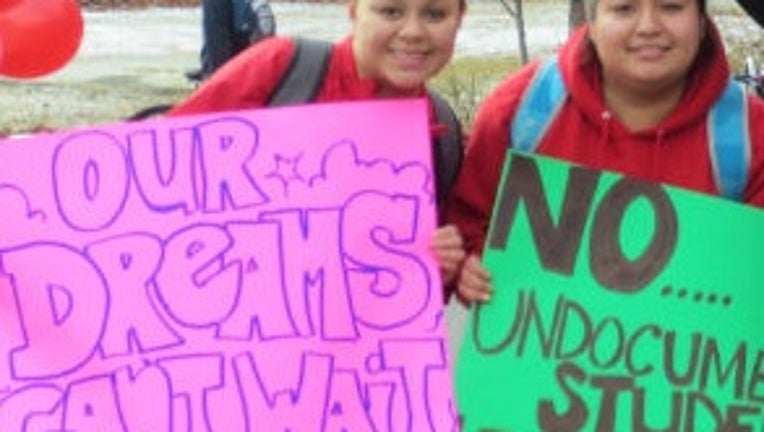 Supporters of the bill held signs outside the state Capitol in Olympia. (Photo: House Democratic Caucus)

OLYMPIA -- Gov. Jay Inslee on Wednesday signed into law the state's version of the "Dream Act" to expand financial aid to undocumented students who were brought into the United States illegally.

State Sen. Barbara Bailey, R-Oak Harbor, one of the sponsors of the REAL Hope Act, attended the signing ceremony in the governor's office.

"I'm proud that we have been able to find a solution to this issue," Bailey said in a news conference. "These students were raised in our state, have gone through our K-12 schools and now have chance to afford college in our state.”

On Feb. 18, the House of Representatives gave final legislative approval to the bill, which also provides an additional $5 million to the State Need Grant Program for financial aid for qualified low-income students.

Inslee had promised to sign the measure into law.

“The Dream Act represents a new future for many aspiring Washington students," Inslee said in a written statement on Feb. 18. "While we’ve opened the doors of our colleges and universities to students from all walks of life, too many still face an insurmountable financial barrier.

"This bill ensures that the young men and women we’ve invested in at our high schools and who aspire to become productive American citizens will now have fair access to the financial support they need to turn their dreams into reality," the governor said. "This is a landmark achievement for the 2014 session. I appreciate the hard work of the legislators and students who have been working on this for so long and who helped pass this bill. I look forward to signing this bill and celebrating a big step forward for thousands of young Washingtonians.”

The new law could grant scholarship money to "any person who has completed the full senior year of high school," and had lived in Washington state at least three years.