SEATTLE -- Seattle police so far this year have arrested 41 men for trying to hire teenage prostitutes. But the real mission of the detectives in the High Risk Victims Unit is rescuing those ensnared in child sex trafficking. 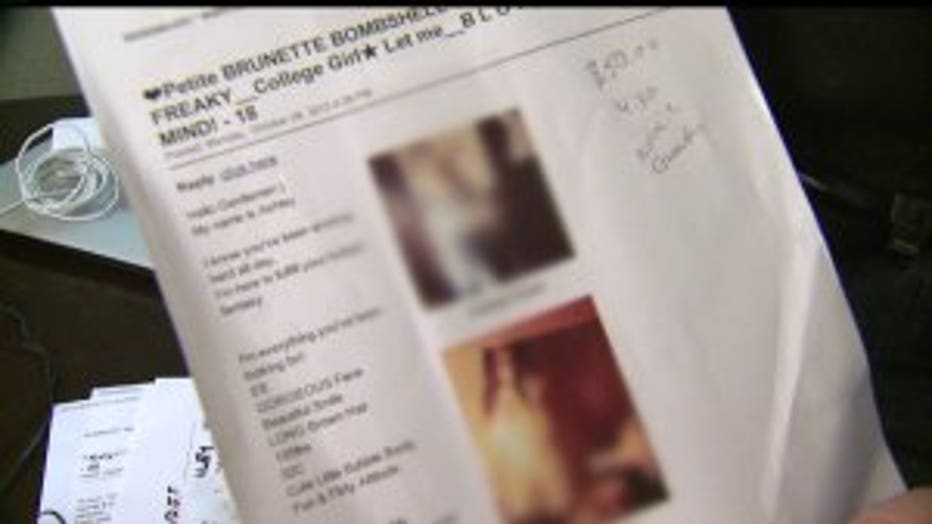 Detectives in the unit this year have rescued 29 underage victims of child sex trafficking, including a 16-year-old girl and her 17-year-old friend during a recent undercover operation at a north Seattle hotel.

“You have girls that may be so despondent over this lifestyle, that they were sold a bill of goods, that they are suicidal and, of course, there`s always the risk of meeting that 'john' that could be the next Green River Killer or the pimp that beats them or kills them,” Sano said.

During the operation, officers targeted girls in online ads that appeared to be underage.  Five young women showed up at the hotel and were allowed to go home because they were over 18.   One girl said she was working as an escort because she wanted a car.  Another said she was busted as a prostitute for the first time when she was 15.

A third who came with her sister said, “This is just my first time, we were just hanging out. A friend ditched out. We just came over to have a drink.'”

Detective Bill Guyer , who works undercover in the unit, said of  the operation, “The home run is to find a young juvenile girl who is ready to be rescued.'”

He called a girl advertised online who came to the room with her friend. Both were underage and weren’t talking.

Guyer said, “If their still caught up in the glamour of, aw, this is OK, and their pimp is still the greatest guy in the world, that's going to be a difficult interview.”

Detectives were able to track down the girls’ alleged pimp -- Jeremiah Williams, a 21-year-old felon who goes by “J.” He was ordered held on two counts of promoting commercial sexual abuse of a minor.

Guyer said, “Our victims aren`t standing at the street corners waving us down, so, unfortunately, we have to dive out into the ocean to save that drowning victim. (That) is kind of what it is.”