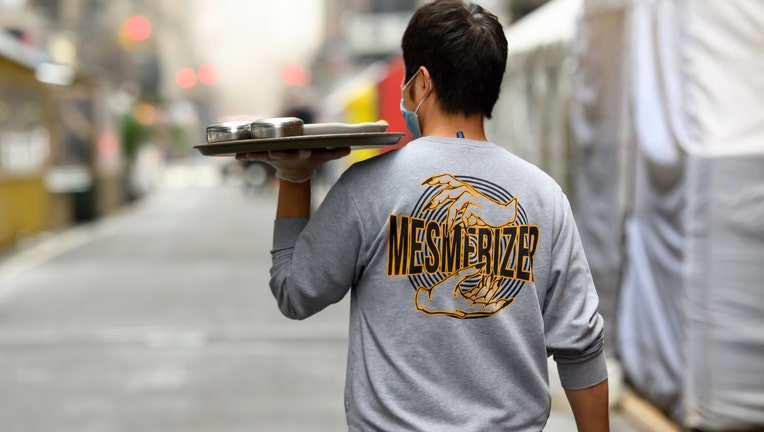 A waiter carries a tray of food in Koreatown on Dec. 12, 2020 in New York City. (Photo by Noam Galai/Getty Images)

The COVID-19 pandemic has ushered the hospitality industry into an unforeseen crisis as companies struggle to find and hire workers even as more states ease restrictions and more Americans get vaccinated.

"We're in a place we've never been in before," President and CEO of the American Hotel and Lodging Association Chip Rogers told FOX Television Stations Tuesday.  "We started off the pandemic losing all of our customers... and now that customers are coming back because of the pent-up leisure demand, now we're really struggling to finding in many places across the country... finding workers."

The National Federation of Independent Business said 42% of business owners had job openings that could not be filled — a record high, according to its March report. Also, 91% of those hiring or trying to hire reported few or no qualified applicants for the positions they were trying to fill, the federation said.

"Never in history, at least for me personally, that I've had this much trouble hiring people. Right now, I don't even know where the experienced people are. We can't even seem to find them," Kivelstadt Cellars & Wine Garden owner Jordan Kivelstadt told KTVU.

"That has really been the struggle, as demand grows, we are having trouble keeping up with it, because of a lack of skilled labor," Director of Restaurant Operations for Fearless Restaurants Tamas Szene told FOX 29.

But the Bureau of Labor Statistics reported that even though the leisure and hospitality industry added 5.4 million jobs over the past year, employment is still down 2.8 million jobs, or 16.8%, since February 2020.

Rogers said there are many reasons why the industry is having trouble filling jobs.

"It ranges from child care. It ranges from fear of COVID, also including enhanced unemployment insurance. For many people, it pays more to stay home and not work than it does to go out and work," Rogers said.

"It appears to a lot of our business owners that they are competing against that boost to federal unemployment in terms of being able to bring people back into the workforce," CEO of Greater Winter Haven Chamber of Commerce Katie Worthington Decker told FOX 13.

Rogers said in order for the industry to lure back workers, companies need to reassess their business model. This includes increasing salaries, issuing paychecks more frequently, and speeding up the job hiring process with shorter applications and interviews.

Some companies are already taking such steps. Chipotle announced it will increase the average pay to $15 an hour, hoping to hire 20,000 more employees in 2021 to staff 200 new restaurants. According to FOX Business, McDonald's announced in April it was hiring 8,000 employees in Tennessee alone, and a separate franchise in South Florida said it would hand out $50 to anyone who simply showed up to an interview with the chain. Taco Bell also looked to hire 5,000 people after hosting "hiring parties" nationwide in April.

The latest guidelines for vaccinated Americans could also help the hospitality industry rebound. The U.S. Centers for Disease Control and Prevention eased its guidelines on the wearing of masks outdoors, saying fully vaccinated Americans don’t need to cover their faces anymore unless they are in a big crowd of strangers. The CDC said fully vaccinated people can also travel within the U.S. Many states have resumed outdoor and indoor dining.

Rogers urges people to patronize hotels and restaurants if possible. He also urged customers to be patient when going out and recognize that many businesses, like hotels, are short-staffed.

"Be a little bit patient. Recognize that there are some labor challenges at the hotels," he said. "Be flexible, if you can do that, you’re going to have a better experience."