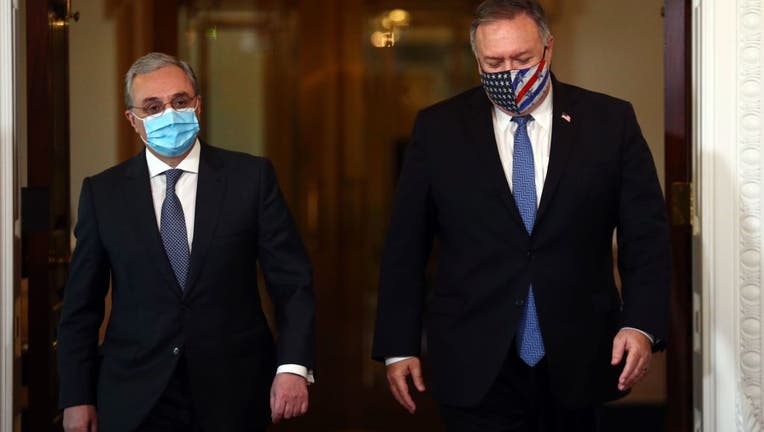 Armenian Foreign Minister Zohrab Mnatsakanyan (L) meets with US Secretary of State Mike Pompeo to discuss the conflict in Nagorno-Karabakh, at the State Department in Washington, DC, on October 23, 2020. (Photo by HANNAH MCKAY / POOL / AFP) (Photo by

WASHINGTON - For the third time this month, Armenia and Azerbaijan have agreed to implement and abide by a ceasefire, according to Secretary of State Mike Pompeo.

The U.S. brokered ceasefire comes a day after Secretary Pompeo met in Washington with the foreign ministers of Armenia and Azerbaijan.

“The United States facilitated intensive negotiations among the Foreign Ministers and the Minsk Group Co-Chairs to move Armenia and Azerbaijan closer to a peaceful resolution of the Nagorno-Karabakh conflict,” according to a statement from the U.S. Department of State.

Armenian Prime Minister Nikol Pashinyan has repeatedly said that Armenia is ready for a peaceful resolution of the dispute and it was Azerbaijan that wouldn’t agree to a compromise, Pashinyan’s spokeswoman, Mane Gevogryan, told the Interfax news agency Sunday.

RELATED: U.S. stepping up diplomatic efforts to try to end fighting between Armenia and Azerbaijan

On Friday President Trump commented on the situation and promised to help Armenians.

“We are talking about it, we are working with Armenia. We have a very good relationship with Armenians, very good people, they are so dedicated they’re incredible people, we will see what happens,” President Trump stated.
“I don’t wanna say. But we will see what happens, I think really good progress is being made with respect to that. We have a lot of people living in this country from Armenia, originally from Armenia, and we are going to help them,” he added.

President Trump says progress is being made between Armenia and Azerbaijan as the US steps up efforts to end the violence between the two countries.

Heavy fighting between Armenia and Azerbaijan over the region of Artsakh (also known as Nagorno-Karabakh) began on Sept. 27. Heavy artillery, rockets and drones have killed hundreds in the area.

Continuing coverage of the conflict between Armenia and Azerbaijan

Armenia says over 900 soldiers have been killed, including dozens of civilians. Much of the residents in Artsakh have been displaced, infrastructure, including schools and churches have been destroyed.