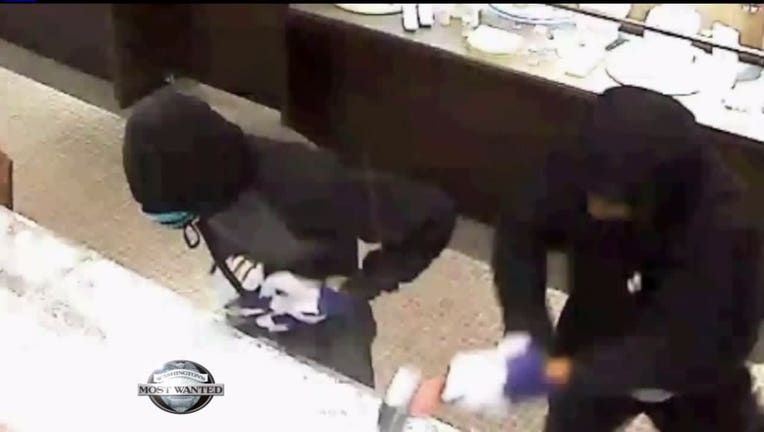 LYNNWOOD, Wash. -- Surveillance video from a Tuesday afternoon smash and grab robbery inside the Alderwood Mall is shocking, but it's actually an increasing sight in jewelry stores nationwide.

The Jewelers' Security Alliance says, there was 62 jewelry store smash and grabs nationwide last year. Most of them were at a mall on a Tuesday, with the most common time of 10 a.m.

On Tuesday in Lynnwood, police say, two men wearing all black smashed a display case with a sledgehammer and stole several watches at Ben Bridge Jeweler.

The mall was briefly locked down as police searched for the suspects, but they got away.

No one was hurt in the robbery.

Another smash and grab robbery happened last weekend at the Ben Bridge store at the Bellevue Square Mall.

Police are now looking into whether the two incidents might be related. "Other agencies have had similar incidents, we're looking at those connections," said Lynnwood Police Cmdr. Sean Doty. "We're aware of some incidents that happened at Bellevue, some other areas in Washington, as well as in Oregon, so we're trying to piece it all together, figure out what all the connections are and identify the individuals involved."

Detectives think both suspects are black.

If you know anything that can help detectives identify them, use the P3 Tips App to submit your information to Crime Stoppers, or call the hotline at 1-800-222-TIPS(8477).