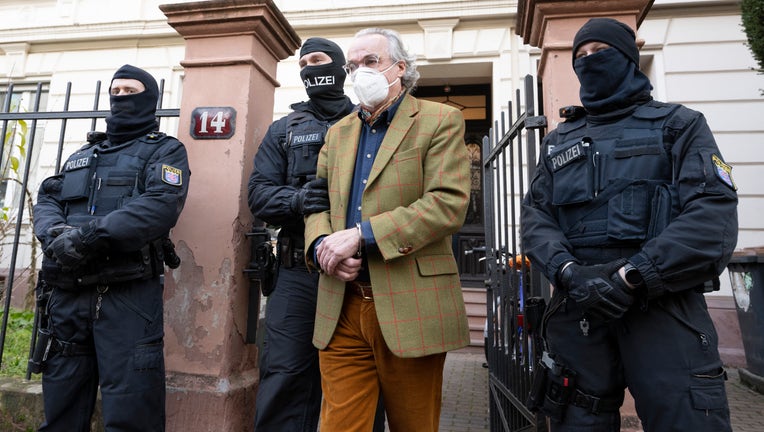 BERLIN - Thousands of police officers carried out raids across much of Germany on Wednesday against suspected far-right extremists who allegedly sought to overthrow the government in an armed coup. Officials said 25 people were detained.

Federal prosecutors said some 3,000 officers conducted searches at 130 sites in 11 of Germany's 16 states. While police raids against the far right are not uncommon in the country — still sensitive to its grim Nazi past — the scale of the operation was unusual.

Justice Minister Marco Buschmann described the raids as an "anti-terrorism operation," adding that the suspects may have planned an armed attack on institutions of the state.

Prosecutors said the suspects were linked to the so-called Reich Citizens movement, whose adherents reject Germany’s postwar constitution and have called for bringing down the government.

German media outlet Der Spiegel reported the searched locations included the barracks of Germany's special forces unit KSK in the southwestern town of Calw. The unit received scrutiny in the past over alleged far-right involvement by some soldiers.

Federal prosecutors declined to confirm or deny that the barracks was searched. 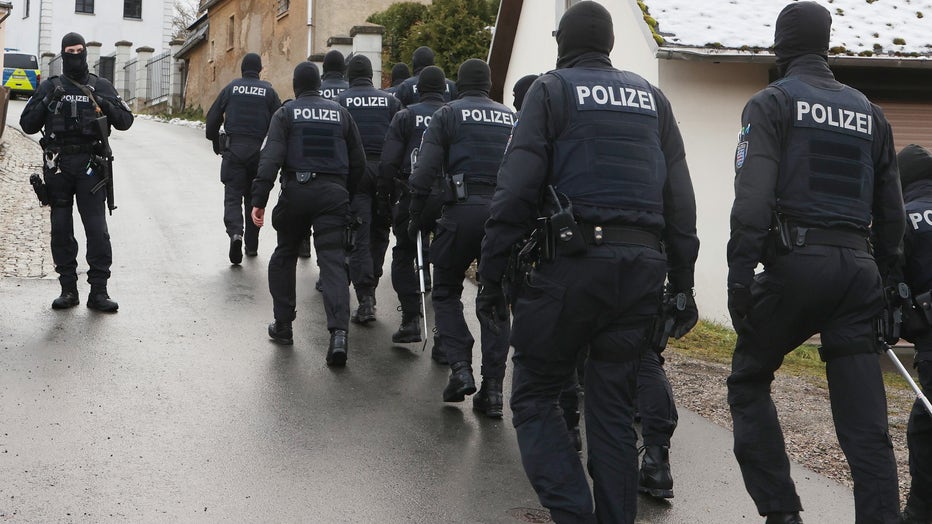 Thuringia, Saaldorf: Police task forces run to the hunting lodge Waidmannsheil, during the search by the police. (Photo by Bodo Schackow/picture alliance via Getty Images)

Along with detentions in Germany, prosecutors said one person was detained in the Austrian town of Kitzbuehel and another in the Italian city of Perugia.

Prosecutors said those detained are alleged to have last year formed a "terrorist organization with the goal of overturning the existing state order in Germany and replace it with their own form of state, which was already in the course of being founded."

The suspects were aware their aim could only be achieved by military means and with force, prosecutors said.

Some of the group's members had made "concrete preparations" to storm Germany's federal parliament with a small armed group, according to prosecutors. "The details (of this plan) still need to be investigated" to determine whether any of the suspects can be charged with treason, they said.

The group is alleged to have believed in a "conglomerate of conspiracy theories consisting of narratives from the so-called Reich Citizens as well as QAnon ideology," according to the statement. Prosecutors added that members of the group also believe Germany is ruled by a so-called "deep state;" similar baseless claims about the United States were made by former President Donald Trump.

Prosecutors identified the suspected ringleaders as Heinrich XIII P. R. and Ruediger v. P., in line with German privacy rules. Der Spiegel reported that the former was a well-known 71-year-old member of a minor German noble family, while the latter was a 69-year-old former paratrooper.

Federal prosecutors said Heinrich XIII P. R., whom the group planned to install as Germany's new leader, had contacted Russian officials with the aim of negotiating a new order in the country once the German government was overthrown. He was allegedly assisted in this by a Russian woman, Vitalia B.

"According to current investigations there is no indication however that the persons contacted responded positively to his request," prosecutors said. 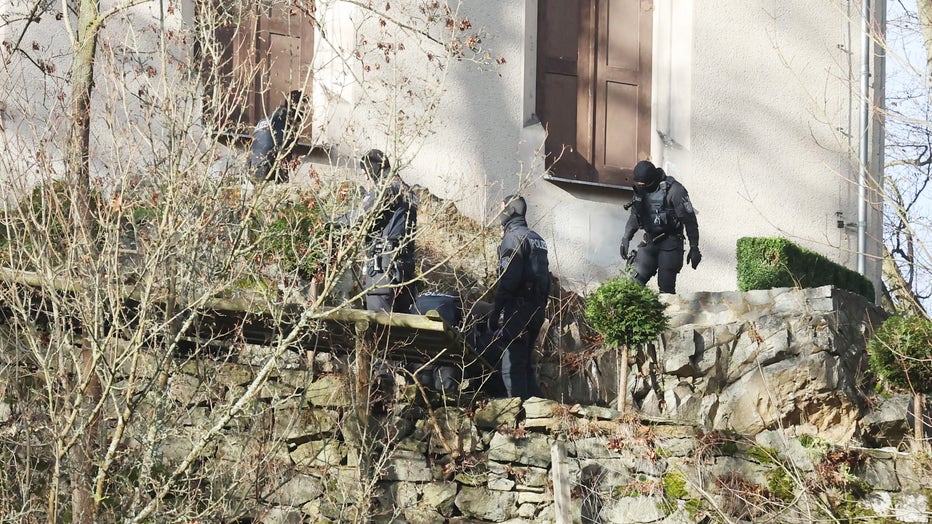 Prosecutors identified another individual detained by police Wednesday as Birgit M.-W. Der Spiegel reported she is a judge and former lawmaker with the far-right Alternative for Germany party.

The party, known by its German acronym AfD, has increasingly come under scrutiny by German security services due to its ties with extremists.

AfD's co-leaders, Tino Chrupalla and Alice Weidel, condemned the reported plans, which they said they had only learned of through the media.

"We have full confidence in the authorities involved and demand a swift and comprehensive investigation," they said in a statement.

Prosecutors said that apart from a council of leaders, or Rat, the group had tasked several members with the formation of an armed wing. Led by Ruediger v. P., they planned to obtain weapons and conduct firearms training.

Wednesday's raids showed that "we know how to defend ourselves with full force against the enemies of democracy," Interior Minister Nancy Faeser said.

"The investigation offers an insight into the depths of the terrorist threat within the Reich Citizens milieu," Faeser said. "Only the further investigation will provide a clear picture of how far the coup plans had come."

Sara Nanni, a Green party lawmaker, suggested the group may not have been very capable. 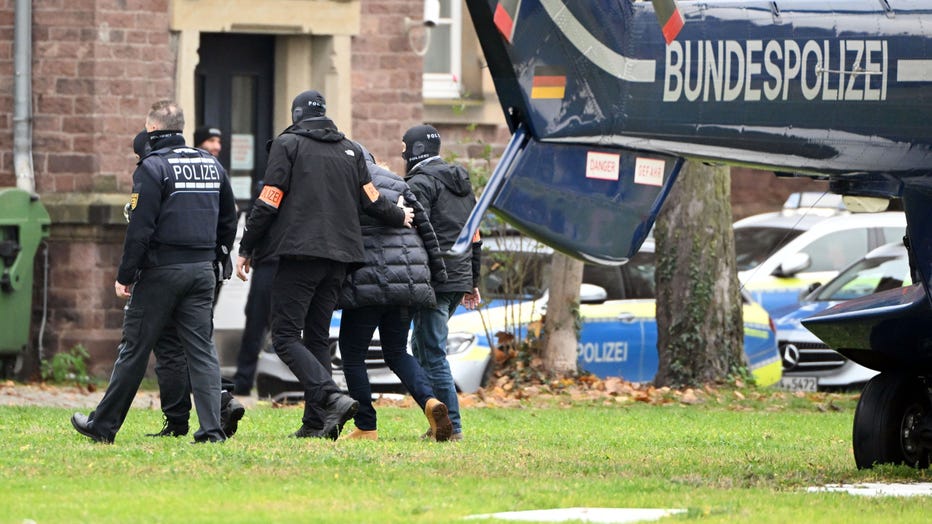 07 December 2022, Baden-Wuerttemberg, Karlsruhe: A person (2nd from right) is taken out of a helicopter by police officers. (Photo by Uli Deck/picture alliance via Getty Images)

"More details keep coming to light that raise doubts about whether these people were even clever enough to plan and carry out such a coup," Nanni said in a post on the social network Mastodon. "The fact is: no matter how crude their ideas are and how hopeless their plans, even the attempt is dangerous!"

Officials have repeatedly warned that far-right extremists pose the biggest threat to Germany's domestic security. This threat was highlighted by the killing of a regional politician and the deadly attack on a synagogue in 2019. A year later, far-right extremists taking part in a protest against the country’s pandemic restrictions tried and failed to storm the Bundestag building in Berlin.

Faeser announced earlier this year that the government planned to disarm about 1,500 suspected extremists and to tighten background checks for those wanting to acquire guns as part of a broader crackdown on the far right.