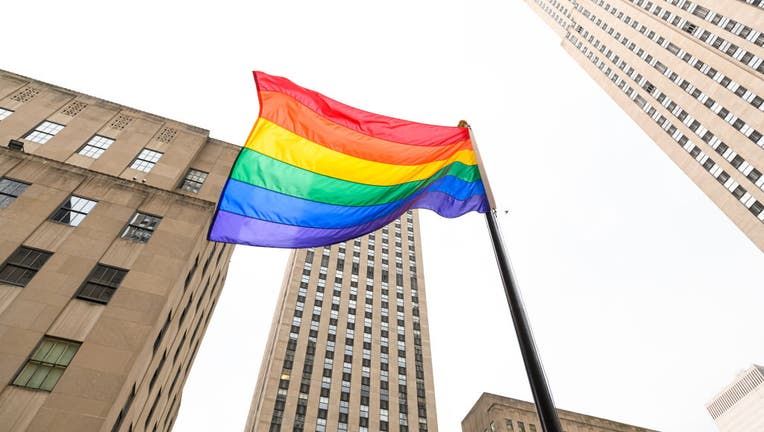 FILE - Rainbow flags are seen in Rockefeller Center in honor of the 50th anniversary of the first gay pride march on June 28, 2020 in New York City.

After President Donald Trump declined to disavow the far-right Proud Boys, a known hate group, during the first presidential debate on Sept. 29, the gay community decided to take over the hashtag “Proud Boys” after it started trending.

In response to the trending hashtag on Twitter, a plethora of LGBTQ+ men decided to take over the “Proud Boys” hashtag and turned it into a social media celebration of gay pride, filling feeds with photos of family, loved ones and friends, as well as memes.

The Proud Boys have been designated a hate group by the Southern Poverty Law Center, and have held multiple events in Portland, alongside other far-right groups. The gatherings have sparked some violent clashes with left-wing counter-demonstrators.

“Almost everything I see is from the left wing, not from the right wing," said President Donald Trump, whose exchange with Democrat Joe Biden left the group Proud Boys celebrating.When moderator Chris Wallace asked the president if he was willing to denounce white supremacists, Trump responded, “Who do you want me to condemn? What do you want to call them? Give me a name.”

“Proud Boys,” Biden chimed in, referencing the far-right extremist group that has shown up at protests in the Pacific Northwest. The male-only group of neo-fascists describes themselves as “western chauvinists,” and they have been known to incite street violence.

Trump and Biden on law and order

Donald Trump and Joe Biden debate the recent protests that have rocked the nation.

Proud Boys leaders and supporters later celebrated the president’s words on social media. A channel on Telegram, an instant messaging service, with more than 5,000 of the group’s members posted “Stand Back” and “Stand By” above and below the group’s logo.

The Trump campaign told FOX News on Sept. 29 that the president has “continuously denounced” white supremacists, including during the first presidential debate, when they said he did so “twice.”

Trump campaign Communications Director Tim Murtaugh, in an interview with FOX News, said that the president has “repeatedly, over the course of years now, denounced white supremacists and has been consistent in doing that.”

“The media keeps asking him to denounce white supremacy, and he keeps doing it,” Murtaugh told FOX News. “At a certain point, they are going to have to take yes for an answer.”

It's not clear who started the hashtag takeover, but actor George Takei tweeted the idea on Oct. 1, well ahead of the trend.