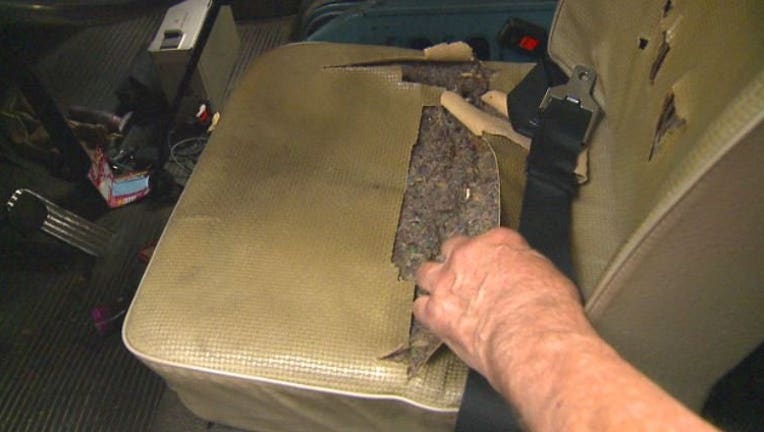 I called the owner and gave him the good news. “I could hug you!" said Bruce Sellers. Thanks everyone for your help!!

The van was found abandoned in the Clearview neighborhood near Snohomish Ave. and Interurban Ave., which is south of the city of Snohomish -- and unfortunately -- was badly vandalized, making the reunion with Bruce bittersweet. "It’s hard to explain, because I just got it back and now I’m in the process of assessing the situation, but strangely enough, it’s salvageable. It’s a project now, so I’m going to pull it into the garage, work on it as I find time, but it’s definitely not what it was. They took all the racks off top, they took the spare tire cover, they didn’t take the spare tire, but I had the key for it. You can see the inside, they ripped the heck out of this seat and I don’t know what they were thinking. Why would they do that? But, I’ll put her back together. It’s salvageable. I hope it runs. I’m crossing my fingers that it runs. I don’t see why it wouldn’t, I think they parked it at the end of this dead end street and then took the two batteries and then hit the road, so if I put a battery in it, hopefully it will crank back up, because it was running great," said Sellers.

The stolen firearms and television have not been recovered.

Detectives are processing the van for evidence.

No arrests have been made in the case.

-----------ORIGINAL CASE-------------
WOODINVILLE, Wash. -- Bruce Sellers returned to his home in the Woodinville area from a trip to the mountains to find his house ransacked and his beloved 1974 blue VW bus stolen from his garage.

“It's devastating. It's something I wouldn't wish on anyone,” said Sellers.

The vehicle has a bike rack on top, a black "bra" on the front, yellow primer paint on the driver's side rear quarter, and Grateful Dead and peace stickers all over the back.

Sellers says people would drive by and flash him the peace sign.

“Hippy van. So me trying to leave the '60s, I'm having trouble doing that, you know what I'm saying?" Sellers asked. 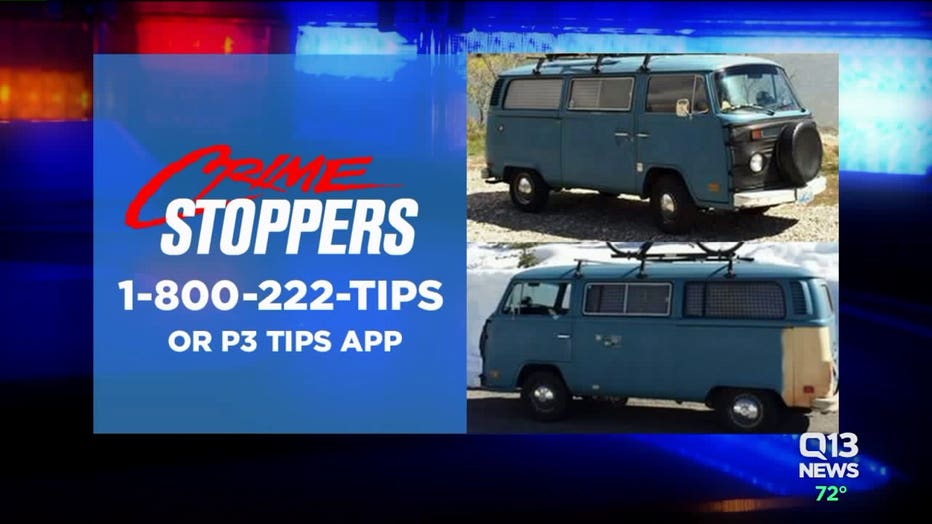 He bought the Volkswagen bus  in Tacoma in 1979. It had been converted to a camper. He has fond memories of bonding with his daughter as they traveled all over the West Coast.

The VW had an electric refrigerator, propane stove and new oil cooler that cost $1,200.

“I just recently put eight-ply tires on it so it will go anywhere. It was just so ready,” said Seller.

Deputies say the crooks used a ladder to get through a slightly open window on the second floor of Sellers' home on 182nd Avenue Northeast.

"It sounds like they probably had some time inside. They looked around quite a bit. They were able to steal two guns out of the house, which is obviously frightful for us,” King County Sheriff's Sgt. Ryan Abbott said.

Investigators tried to find fingerprints but it appears the thieves may have worn gloves. They stole Sellers’ Stihl chainsaw along with a 48-inch TV and sound bar.

If you spot the van, please call 911 immediately. If you know who was involved and want a cash reward of up to $1,000, submit an anonymous tip to Crime Stoppers of Puget Sound by downloading the P3 Tips App to your phone for free or going to www.P3Tips.com.  You can also call 1-800-222-TIPS (8477).