SEATTLE -- U.S. protections for the waters that a group of endangered orcas call home could soon expand beyond the Seattle area to encompass much of the West Coast, from the Canadian border to central California.

The National Oceanic and Atmospheric Administration issued a proposal Wednesday to increase the critical habitat designation for southern resident killer whales by more than sevenfold under the Endangered Species Act.

Just 73 orcas remain in the Pacific Northwest population, the lowest number in more than three decades. They're struggling with a lack of chinook salmon, their preferred prey, as well as toxic contamination and vessel noise.

The NOAA proposal calls for an additional 15,626 square miles of federally protected habitat that would run from the border with Canada, down south to Point Sur, California. 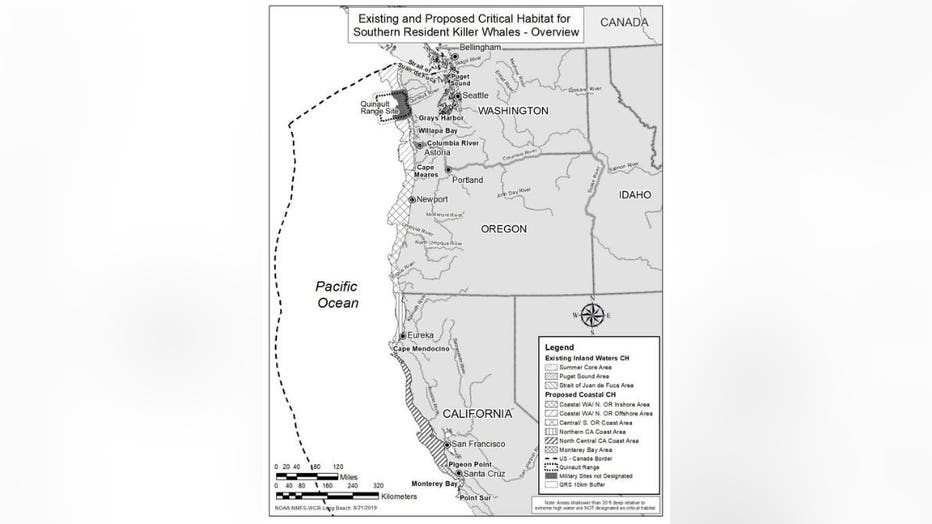 The designation means federal agencies must ensure that activities they pay for, permit or carry out do not harm the habitat, but it does not generally affect approved recreational or commercial activity such as whale watching and shipping, said Lynne Barre, NOAA Fisheries' recovery coordinator for the whales.

"It only affects federal actions, so where there is a federal permit or grant or federal decision, that's what's protected," Barre said.

The orcas that return to the inland waters of Washington state every summer are genetically distinct from other killer whale populations around the world and differ from some of the others in eating primarily salmon, rather than seals or other marine mammals.

The survival of the three orca pods that make up the so-called southern resident population have been under intense scrutiny recently. One orca, known as J35, drew international attention last year as she carried her dead newborn on her head for more than two weeks.

The whales were listed as endangered in 2005 after the Center for Biological Diversity sued for the status. The following year, NOAA Fisheries designated Puget Sound as critical habitat, which covered about 2,560 square miles around Seattle.

The environmental group sued again last year to force the agency to act on its 2014 petition to expand protections to where the orcas look for food and migrate off the coasts of Washington, Oregon and California.

The group said the protections would help reduce water pollution and restrict vessel traffic that can interfere with the animals. NOAA Fisheries agreed in 2015 that such a move was necessary.

Species with critical habitat protections like those proposed Wednesday are twice as likely to recover, said Julie Teel Simmonds, a senior attorney at the Center for Biological Diversity. The plan is largely in line with what her group has pushed for.

"It's an independent requirement that really focuses on the recovery aspect, so we're not just trying to keep these orcas limping along at 73 individuals," she said. "We want to see them grow to the point where these protections won't be needed."

National security concerns exempt a large area in and around the U.S. Navy's Quinault Range Site, which conducts underwater testing in western Washington. The potential protection zone also overlaps with tribal fishing rights in Washington state, but that area is not exempted, said Barre of NOAA Fisheries.

Idaho, Oregon and California were notified of the proposal, though Barre said there hasn't been official feedback yet. The 90-day public comment period opens Thursday and approval is not expected until at least next year.

An economic impact study projects the proposal would create about $68,000 in administrative costs a year. Barre said that number takes into account how federal authorities assess the effect to whales when considering projects and any possible changes to their habitat, such as water quality and passageways.

"I don't want to overplay it and create a perception that there'll be sweeping regulatory changes," Barre said. "We're already analyzing impacts."