On Sunday afternoon a small fire was called into 911 as a 5-foot by 5-foot fire, by the time fire crews were done battling the fire it had spread roughly a quarter mile and threatened a number of homes in Lakewood.

The fire began near the Clover Park Early Learning Program, but quickly caught fire near a set of Amtrak tracks and crossed behind a row of homes near Rainier Avenue and Irene Street.

"No one though it was going to be anything," said Ryan Nelson, who lives in a nearby home. "Then it starts getting over here and we see it getting into the yards and that’s when everyone starts running out."

Nelson said neighbors from all around started rushing into backyards with fire hoses and began wetting down yards and fences in a last-ditch effort to avoid a worse-case scenarios. 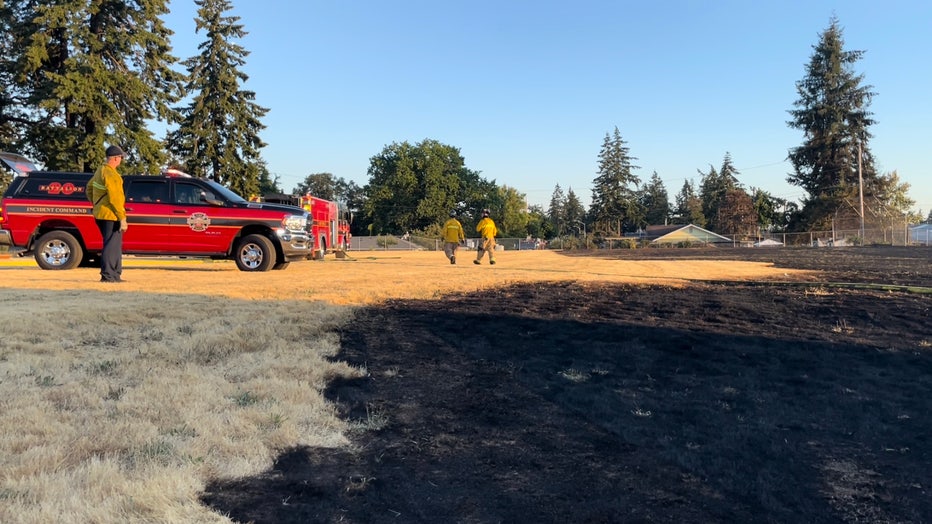 A fast moving brush fire ran through the back-end of an early learning center and nearly took out a half-dozen homes Sunday afternoon.

Meanwhile, fire crews had been called in and were quickly trying to put out the fire, as well, but as Battalion Chief Nick Britton explained a breeze caught and was sending the fire moving quickly.

"It’s dry fuel," said Britton. "It’s fuel that wants to burn quickly and this is the exact result you get."

In the end, between firefighters and homeowners they saved a number of homes that were in danger of catching fire. One home was damaged, while a shed was burned up. Otherwise, neighbors walked away unscathed.

However, the end isn’t likely in sight. Britton noted that a fire ban is in place for unincorporated areas throughout Pierce County – but the weather conditions are shaping up for more fires to break out.

"The uptick in brush fires, specifically in the past five years – it’s all over Pierce County," said Britton. "In fact, it’s all over the region."