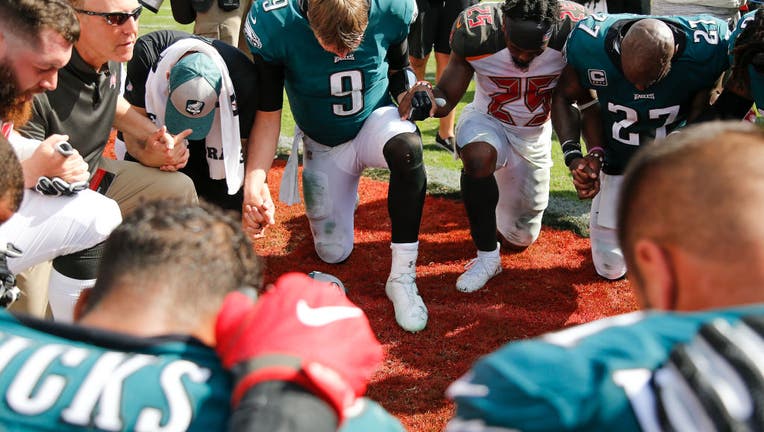 TAMPA, FL - SEPTEMBER 16: Nick Foles #9 of the Philadelphia Eagles and Peyton Barber #25 of the Tampa Bay Buccaneers pray together after the game at Raymond James Stadium on September 16, 2018 in Tampa, Florida. (Photo by Michael Reaves/Getty Images)

The friend-of-the-court filing by the players supports Kennedy, who was fired by the Bremerton School District in 2015 for praying on the field after games. The court case has made its way to the Supreme Court and is expected to be heard this spring.

"Each amicus attended and played football for at least one public high school or university before turning pro," the brief stated. "Each amicus also voluntarily exercised his constitutional right to pray before, during, and after games in which he competed on behalf of such schools – at times alone, at times with other players, and at times with coaches. Each amicus thus has first-hand experience with the environment in which this case arose. And each amicus can testify firsthand to the power of prayer – in generating gratitude for the opportunity to play, promoting high ideals of sportsmanship, protecting the safety of those who take the field, bridging personal, political, and racial divides among players, and ultimately in glorifying God.

"For all these reasons, amici support protection for the free speech rights of public school coaches like Joe Kennedy."

After games had ended and after both teams’ players and coaches met at midfield to shake hands, Kennedy would kneel and offer a silent or quiet prayer.

His practice evolved, however. Students came to join him, and he eventually began to give motivational speeches that often included religious content and a short prayer.

The Supreme Court will hear the case of a former Bremerton, Washington football coach who was removed from his job because he refused to stop praying on the field.

In a statement issued in January after the court agreed to hear the case, Kelly Shackelford, the head of First Liberty Institute, which is representing Kennedy, said, "No teacher or coach should lose their job for simply expressing their faith while in public."

"By taking this important case, the Supreme Court can protect the right of every American to engage in private religious expression, including praying in public, without fear of punishment," Shackelford said.

But the head of Americans United for Separation of Church and State, which represents the school district, said it had followed the law, calling Kennedy’s actions "coercive prayers."

"This case is not about a school employee praying silently during a private religious devotion. Rather, this case is about protecting impressionable students who felt pressured by their coach to participate repeatedly in public prayer, and a public school district that did right by its students and families," Rachel Laser said in a statement.