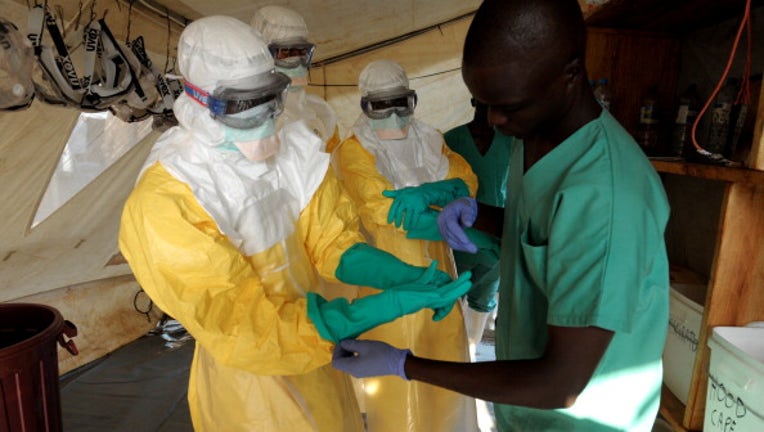 Health specialists work in an isolation ward for patients at the Doctors Without Borders facility in Guékedou, southern Guinea.

WEST AFRICA -- An outbreak of Ebola hemorrhagic fever in West Africa has spread to Guinea's capital and beyond its borders in an "unprecedented epidemic," a leading aid agency reported Monday.

A total of 122 patients are suspected of contracting Ebola and 78 have died, Doctors Without Borders said. Most victims have been in Guinea, but the World Health Organization reported Sunday that two deaths in Sierra Leone and one in Liberia are suspected to have been caused by the Ebola virus.

Cases have been identified in three provinces in Guinea near the borders and in Conakry, its coastal capital, said Mariano Lugli, the Doctors Without Borders coordinator there.

"We are facing an epidemic of a magnitude never before seen in terms of the distribution of cases in the country," Lugli said in a statement issued by the organization. Previous outbreaks "were much more geographically contained and involved more remote locations," he said.

"This geographical spread is worrisome, because it will greatly complicate the tasks of the organizations working to control the epidemic," Lugli said.

The organization, also known by its French name Medecins Sans Frontieres (MSF) describes Ebola as "one of the world's most deadly diseases." It spreads in the blood and shuts down the immune system, causing high fever, headache and muscle pain.

It is rare but creates panic, because there is no cure and it's fatal in up to 90% of cases, according to MSF. The variant seen in the Guinea outbreak is the so-called Zaire strain, which Lugli called "the most aggressive and deadly."