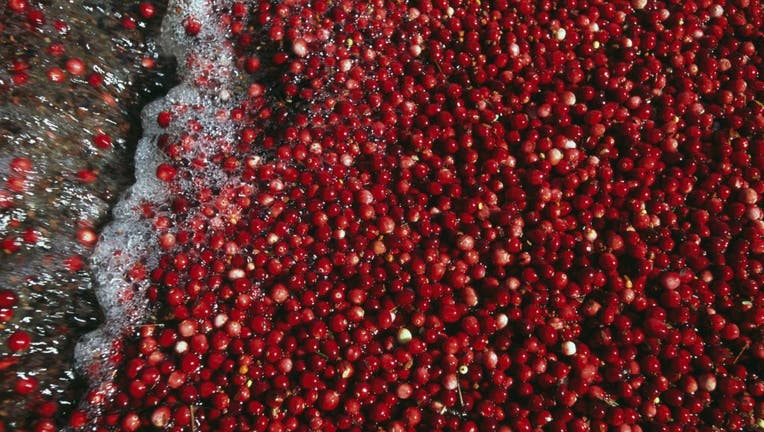 FILE IMAGE- A harvest of cranberries in flooded bogs in Massachusetts is pictured in a file image. (Photo: DEA / V. GIANNELLA / Contributor via Getty Images)

LONDON - As the old saying goes: 100 grams of fresh cranberries a day may help keep the doctor away — or in this case, the heart doctor.

A new study led by researchers at King's College London found that daily consumption of cranberries for one month improved cardiovascular function in healthy men. The researchers examined 45 healthy men, who each consumed either two packets of whole cranberry freeze-dried powder — equivalent to 100 g of fresh cranberries — or a placebo.

The participants consumed these items daily for one month, according to the study.

Those consuming cranberry had "significant improvements" in flow-mediated dilation (FMD), which signals improvement of heart and blood vessel function, according to the study authors. FMD measures how blood vessels widen when blood flow increases, and it is considered a sensitive biomarker for the risk of cardiovascular disease, a university statement about the study further explains.

The team found significant improvements in FMD two hours after the participants’ first consumption, as well as after one month of daily consumption — suggesting both immediate and long-lasting benefits, according to the statement.

The research was supported in part by the Cranberry Institute, a nonprofit founded in support of cranberry growers.

The study was a double-blind randomized controlled trial, meaning neither the participants nor the researchers knew which intervention participants received before the end of the trial. These types of studies are often considered the "gold standard" for evaluating the effectiveness of an intervention and help to reduce bias.

Scientists say coffee might be good for your bones

A recent study shows there may be a positive link between coffee consumption and bone health.

Previous research has also shown health benefits linked to cranberries. The vitamins and minerals they contain help to boost the body's digestive health and antioxidant system and promote good heart health, potentially even improving blood pressure and cholesterol, according to the American Heart Association.

Another component of cranberries, called A-type proanthocyanidins, may help prevent the binding of E. coli in the bladder, which typically occurs before urinary tract infections (UTIs), according to the Cleveland Clinic. It also cites research showing how the same a-type proanthocyanidins may help prevent bacteria formation in the mouth, helping to keep away cavities, gum disease, tooth decay, and possibly even oral cancer.

RELATED: Drinking 2 to 3 cups of coffee daily could benefit the heart, studies say

The findings of the latest study were published on March 22 in the journal Food & Function. The researchers said the findings provide "solid evidence" that cranberries can significantly affect heart health, even in people with a lower risk of cardiovascular disease.

"The increases in polyphenols and metabolites in the bloodstream and the related improvements in flow-mediated dilation after cranberry consumption emphasise the important role cranberries may play in cardiovascular disease prevention," Dr. Ana Rodriguez-Mateos, study author and senior lecturer in nutrition at the Department of Nutritional Sciences of King's College London, said in the statement.

"The fact that these improvements in cardiovascular health were seen with an amount of cranberries that can be reasonably consumed daily makes cranberry an important fruit in the prevention of cardiovascular disease for the general public," Rodriguez-Mateos added.

RELATED: These are the worst places to live with asthma in the US