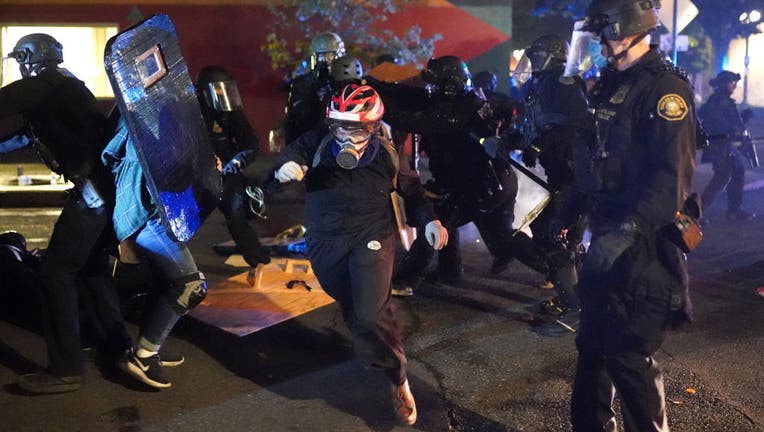 PORTLAND, OR - AUGUST 22: Protesters and Portland police clash while dispersing a crowd gathered in front of the Portland Police Bureau North Precinct early in the morning on August 22, 2020 in Portland, Oregon. Friday marked the 86th night of protes

PORTLAND, Ore. - Dueling demonstrations in Portland Saturday afternoon by right-wing and left-wing protesters turned violent, with demonstrators hurling rocks and other items at each other and getting into fights.

Streets were blocked amid the mayhem between the groups that gathered near the Multnomah County Justice Center in Oregon’s biggest city, local media outlets reported.

Images showed what appeared to be hundreds of people involved, many of them wearing helmets and carrying makeshift shields.

The Justice Center in recent weeks has been the target of left-wing protesters mostly operating at night, when they frequently get into clashes with police.

The oversight agency has received about 19,000 complaints since protests started in the city at the end of May, sparked by the police killing of George Floyd in Minnesota. The complaints have resulted in 87 active investigations.

Right-wing groups had announced a rally near the building Saturday afternoon that quickly drew counter demonstrators. The building houses a police precinct, police headquarters, a county jail and courtrooms and is next door to a federal courthouse that was targeted for weeks last month by left-wing protesters who clashed with federal agents dispatched to Portland to protect it.

Portland police issued a warning about two hours after the demonstrations began, warning that officers were prepared to start using crowd control weapons if the violence did not end.

Violent demonstrations have gripped in Portland for months, following the police killing of George Floyd in Minneapolis police custody.

The Saturday afternoon clashes followed predawn clashes between police and about 200 left-wing protesters outside a different police precinct.

Demonstrators hurled bottles and rocks at officers and pointed lasers at them, damaging police cars and causing minor injuries for several officers, Portland police said in a statement.

One protester was given medical treatment at the scene after he threw rocks at officers and was shot with what police described as a “sponge-tipped less-lethal round,” the statement said.

He was among nine people arrested. Three were charged with assault on a police officer.

A demonstration Friday that went into Saturday morning came a day after protesters in Portland clashed with federal agents outside a U.S. Immigration and Customs Enforcement building.

People in a group of about 100 late Thursday and before dawn Friday sprayed the building with graffiti, hurled rocks and bottles at agents and shined laser lights at them, Portland police said.

The agents set off smoke or tear gas and used crowd control munitions to try to disperse the crowd. Three people were arrested.

Also Friday, a number of federal buildings across the city were closed as the FBI investigated a car bomb threat.