Dinosaurs once roamed every continent on the planet, though one area, in particular, is getting attention for its newly-discovered diversity of species.

Fossils of everything from frogs to turtles to the recently-discovered ankylosaur have been found in Patagonia, the vast, southernmost tip of South America shared by Argentina and Chile. And now, the discovery of certain fossils in the Chilean region provides valuable information about dinosaur life before — and after — the fatal asteroid strike.

Since 2017, researchers from all around the world have been collecting plant and animal fossils to build a record of ancient life in the region under the helm of The University of Texas at Austin.

They’ve since learned about two additional birds and dinosaurs that lived there, all belonging to what’s called the "theropod" group. 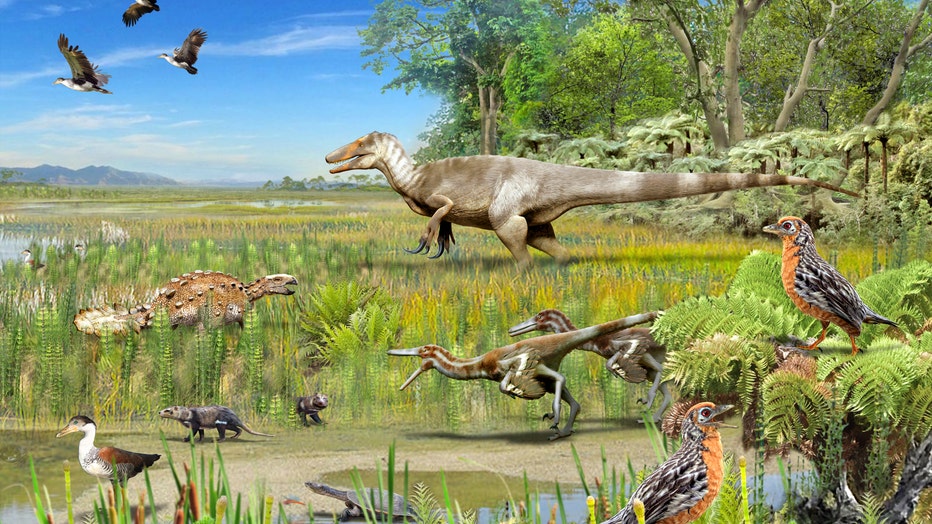 A time averaged artist’s interpretation of Patagonia during the Late Cretaceous, about 66-78 million years ago. The animals pictured include non-avian dinosaurs, birds and other vertebrates that have been discovered in the fossil record of the region

The variety of theropods shows Chilean Patagonia was "a thriving ecosystem" right up until the mass extinction, lead author Sarah Davis explained to FOX Television Stations in an email.

She added that the new theropod fossils can help piece together where certain dinosaurs lived at the time of extinction, and how they were impacted by the evidential asteroid strike.

Further studies of the variety of fossils could potentially provide valuable insight into the aftermath of the asteroid strike.

"The bird fossils in particular may be important for disentangling why some dinosaur groups (birds) were able to survive the end Cretaceous extinction event while all other dinosaurs did not," she said.

Researchers identified the dinosaurs using mostly teeth and toes, and the birds from small bone pieces. 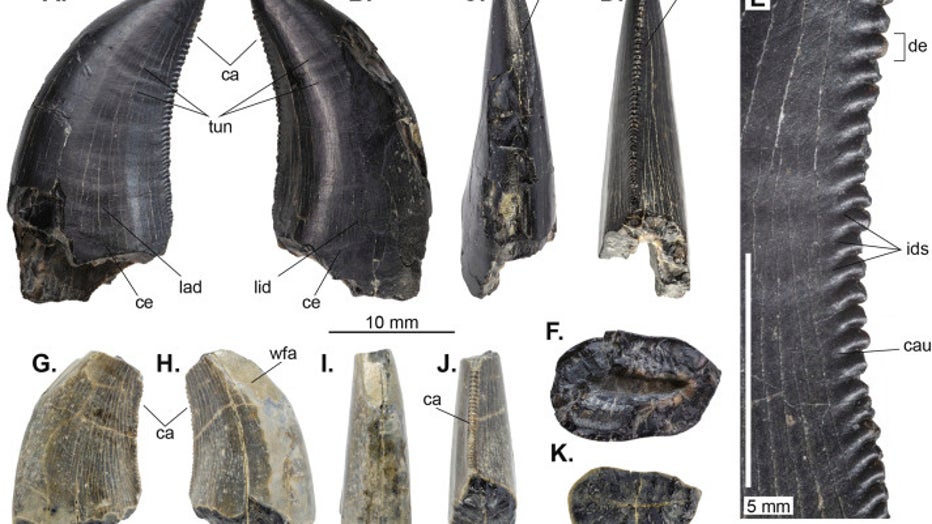 A figure from the study showing teeth from a megaraptor dinosaur from various view points. The black tooth preserves most of the tooth crow. The tan tooth is missing the crown apex and base. Credit: Davis et al via The University of Texas at Austin 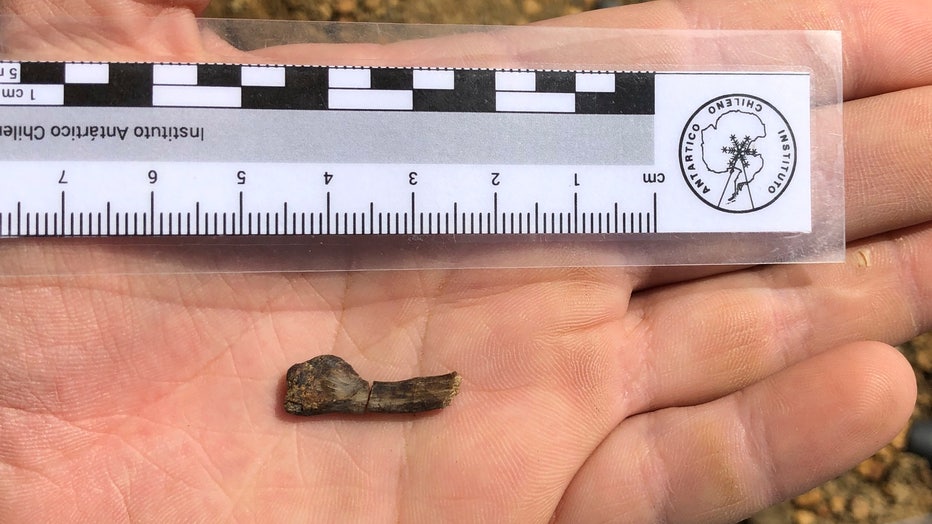 A hand holds a fossil fragment next to a ruler measuring in centimeters. Photo from University of Texas at Austin

The two new dinosaurs discovered in Chile are megaraptors and unenlagiines. Both are carnivorous and would have been the predators in the region.

Some megaraptor species measure up to 33 feet long and are known to have lived in South America, Australia and parts of Asia during the Cretaceous Period, which was 130 - 66 million years ago. In Patagonia, they were among the largest predatory dinosaurs that lived up until the end.

"However, very few associated skeletons of these dinosaurs have been found, so much of their ecology is still not well understood," Davis said.

Unenlagiines ranged in size from 5 to 19.5 feet long, she said, and were very fast, agile hunters that had elongated snouts.

The fossils of the two different bird groups unearthed are enantiornithines and ornithurines.

Enantiornithines are now extinct and resembled sparrows — but with beaks lined with teeth, the university said.

The birds in the group ornithurae include all modern birds living today, and the ones living in ancient Patagonia may have resembled a goose or duck.

That is the group that survived the mass extinction event that researchers are hoping to learn more about.