LAKE WALES, Fla. - An invasion of mighty munchers is descending on the Bay Area as the population of Florida’s biggest and most voracious grasshopper is growing right now.

"They can cause massive destruction," Brenden Huggins, an expert gardener at Bok Tower Gardens, told FOX 13. "Left unchecked, they can really destroy your garden."

The culprit is the Eastern Lubber Grasshopper, also known as "El Diablo," the "devil" in Spanish, because they can cause so much damage.

They can grow up to three inches and have whopper appetites. Some of their favorite feasts include thick leafed plants like Crinums and Amaryllis. They also eat some ornamentals, shrubs and vegetables.

READ Captive-reared Florida grasshopper sparrows are adjusting to the wild

Their only natural predator is a bird called a loggerhead shrike. The bird decapitates them and then leaves their carcass on a thorny bush or barbed wire fence, so the sun can bleach out the toxins in the grasshopper's body. 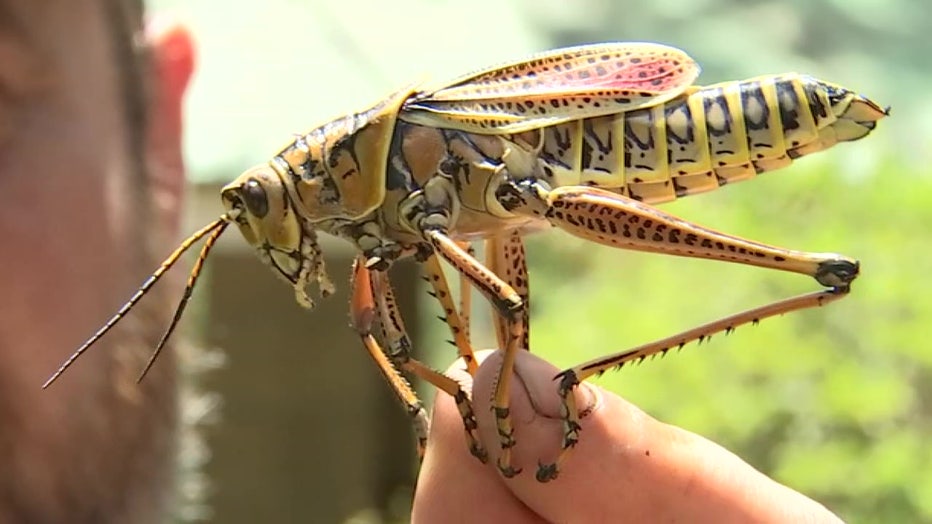 If you see the lubber in your backyard, you may want to take a little predatory action yourself. You can use pesticides to get rid of them or a more tried and true technique.

"You can use the ever-effective shoe sole to crunch them," said Anne Yasalonis, a University of Florida Master Gardener.

The population is growing now because eggs laid last year are hatching now. Adult females are getting ready to lay more. But don’t despair. This invasion will not go on forever. The population typically drops by the end of the summer.