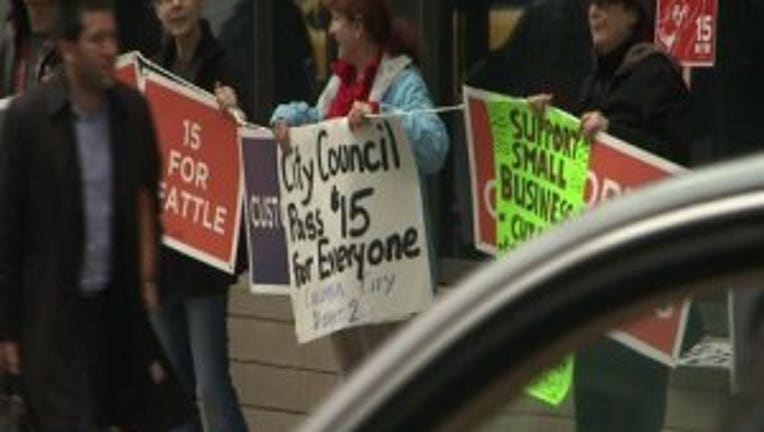 SEATTLE – This week, the Seattle City Council will begin reviewing the mayor’s proposal to raise the minimum wage to $15 an hour. Not everyone is happy about the plan to phase in the higher wage.

Devoney Smith only makes minimum wage at the Eastern Café, so she has another job to help make ends meet.

“It’s definitely difficult,” she says. “I would like to make more money, I think it would be more comfortable.”

But unlike other minimum wage workers in the city, she hasn’t been pushing for a $15 minimum wage. She’s not sure her boss could afford to stay in business and keep her, if he had to pay everyone more.

“We’re getting a good customer base and doing well, but we don’t make as much money as the Target downtown, for instance. It’s not comparable.”

That complaint was echoed by several other small businesses, so the mayor`s commission on the minimum wage decided last week to give businesses with fewer than 500 employees more time to raise wages. They’ll have seven years, with the ability to combine workers tips and employer health care contributions for the first five years. Larger businesses have three to four years to phase in the higher wages.

“Some large businesses could probably do it right away,” says I-Miun Liu, the owner of Eastern Café. “There’s just no way could we do it, so I appreciate that.”

But Liu still has some concerns about the mayor’s proposal. He’s worried he might lose some employees to larger businesses, if they pay more than he can.

“It’s unfortunate, I would hate to become a training café for bigger companies.”

Council member Kshama Sawant also has some concerns with the proposal. She doesn't think it goes far enough. She spearheaded the 15 Now movement, because she thinks businesses need to adopt the 15 dollar wage now.

“We need to keep up the pressure, the city council will be voting on this in the coming months, and we need to make sure our voices are heard.”

The first council meeting on the proposal will be Monday, May 5 at 2:30 pm in city council chambers. There will be an opportunity for public comment. Future meetings are as follows: