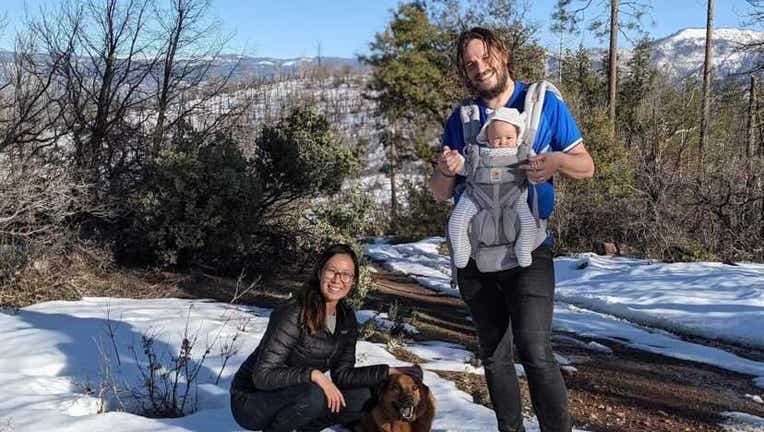 John Gerrish and Ellen Chung had recently moved to the Marisopa area with their 1-year-old daughter and dog. (Steven Jeffe via KTVU)

The Marisopa County Sheriff's Office is confident that they can rule out homicide in the mysterious deaths of a family on a hiking trail in the Sierra National Forest earlier this week.

The couple, John Gerrish and Ellen Chung, set out for a hike on Sunday with their 1-year-old daughter, Miju, and their dog near Hite’s Cove in the Sierra Nevada mountains.

After Gerrish, a software engineer who formerly worked at Google according to his LinkedIn profile, didn't show up for work on Monday, a family friend reported them missing. Google did not respond to a request for comment.

Their bodies were found Tuesday on a hiking trail with no clear cause of death, and while homicide was initially considered as a possibility, law enforcement is now confident that they can rule it out.

"Initially, yes, when we come across a family with no apparent cause of death, there's no smoking gun, there's no suicide note, there's nothing like that, we have to consider all options," Mariposa County Sheriff's spokeswoman Kristie Mitchell told FOX News on Saturday. "Now that we're five days in, no, we're no longer considering homicide as a cause of death."

Autopsies on Thursday did not give investigators many other clues into the deaths, but forthcoming toxicology reports for the family as well as their dog could reveal what killed them.

"We're hoping that within the next week, two weeks, we'll have a better idea," Mitchell said. "There's toxicology that we're waiting for from the autopsies themselves, and then also from the [necropsy for the dog]."

Investigators are looking at a range of causes, including toxic algae blooms and toxic gases. The site was being treated as a hazmat situation on Tuesday but that was lifted about 24 hours later.

The California Department of Fish and Wildlife warned last month that "water testing along the Merced River near Hites Cove… show a high concentration of algae bloom."

"Some species can produce toxins, and if present, can pose a risk to humans and pets," the department said on July 13, warning people not to swim or allow their pets to swim in the water.

Mitchell said Saturday that investigators are waiting for toxicology reports from nearby water sources as well as the water that the family was carrying.

The area around Hite's Cove was also home to gold mining operations in the mid-19th century, which could produce toxic gases, but Mariposa County Sheriff Jeremy Briese told the Fresno Bee on Thursday that he doesn't think the deaths are connected to a mine.

Mariposa real estate agent Sidney Radanovich, one of the couple's friends, told the San Francisco Chronicle that the family had recently moved to Marisopa from San Francisco after "falling in love with the Mariposa area."

"They were such a loving couple, they loved each other quite a bit," Radanovich told the newspaper. "He loved showing the baby all sorts of things and explaining them to her. She didn’t understand, but he would explain them to her anyway."

Mitchell said that authorities will continue to investigate until they get answers for the family.

"We've never seen anything like this, and I don't think this is a typical case that any agency throughout the nation has seen," Mitchell said Saturday. "When you come across, like I said at the beginning, a family, seemingly healthy family, and you come across mom, dad, dog, and baby all deceased, that's not normal."