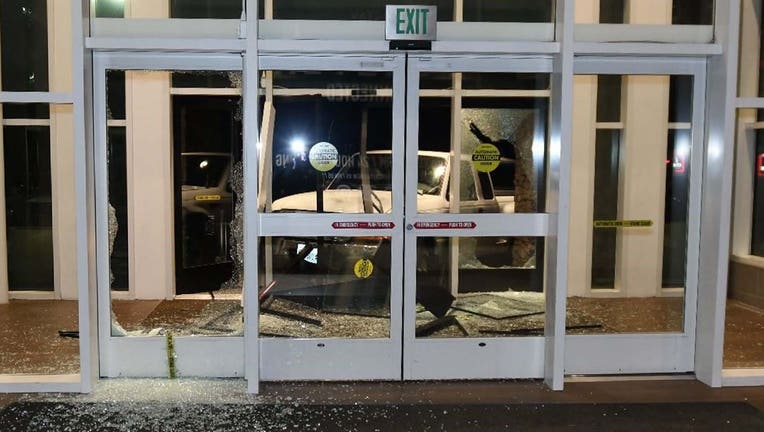 BELLINGHAM, Wash. - A nine-mile police pursuit of a DUI suspect in Bellingham ended when he crashed into the Bellis Fair Mall and tried attacking officers with an axe.

According to the Bellingham Police Department, officers were called to assist Washington State Patrol in stopping an erratic driver late Saturday night. The suspect, later identified as 32-year-old David Anderson, was believed to be under the influence, but was trying to elude state troopers.

Police say Anderson sped through several intersections and stop signs. Anderson allegedly slowed down by another police car and tried to hit the officer with a ‘large axe.’

The officer drove away and was not injured.

Another officer was laying down spike strips, which Anderson avoided by nearly running into their patrol car. As he sped away, he crashed into someone’s car and kept going, eventually going north on I-5 and taking the exit to the Bellis Fair Mall.

Anderson reportedly crashed into the front doors of the mall’s food court. Police say he got out and broke through the glass doors with his axe, then went in and started smashing up windows and businesses.

Officers ordered Anderson to stop, and employed non-lethal measures that did not work, but eventually, Anderson dropped the axe and was arrested. While he was being treated for minor injuries, he kicked a gurney at a responding firefighter.

Police say Anderson caused $100,000 in damage to the mall alone, not counting the hit-and-run crash and other damages.