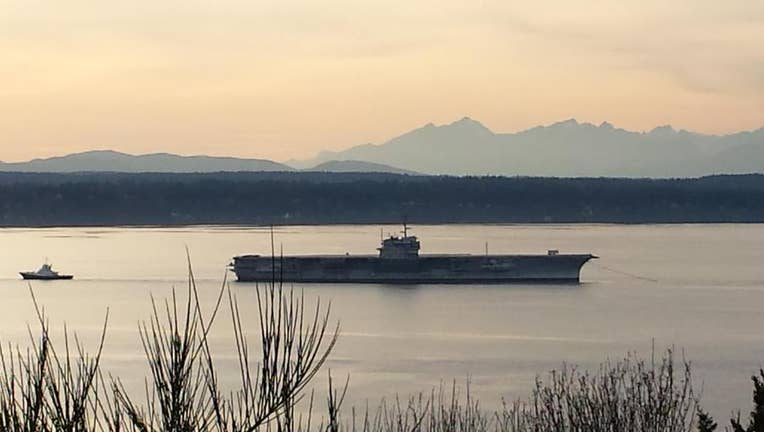 The mothballed aircraft carrier USS Ranger being towed through the Puget Sound Thursday on a long trip to a scrap yard in Texas. (Photo courtesy of viewer Fred Huston)

BREMERTON, Wash. (AP) — The mothballed aircraft carrier USS Ranger -- used for scenes for the movies "Top Gun" and "Star Trek IV" -- was towed out of Bremerton Thursday, starting a 16,000-mile trip from Puget Sound, around South America to a scrap yard in Texas.

The USS Constellation completed the same five-month journey in January to International Shipbreaking at Brownsville, Texas.

The Ranger was commissioned in 1957 and was active from the Vietnam War to Operation Desert Storm, the first Persian Gulf War. The carrier was decommissioned in 1993 at the Puget Sound Naval Shipyard.

The Kitsap Sun reports (http://bit.ly/1wVCFO5 ) the Ranger's departure will leave two carriers in the Bremerton mothball fleet, the USS Independence and the USS Kitty Hawk.

The Independence goes to Texas later this year. The Navy is holding Kitty Hawk in reserve until the supercarrier USS Gerald R. Ford becomes active in 2019.