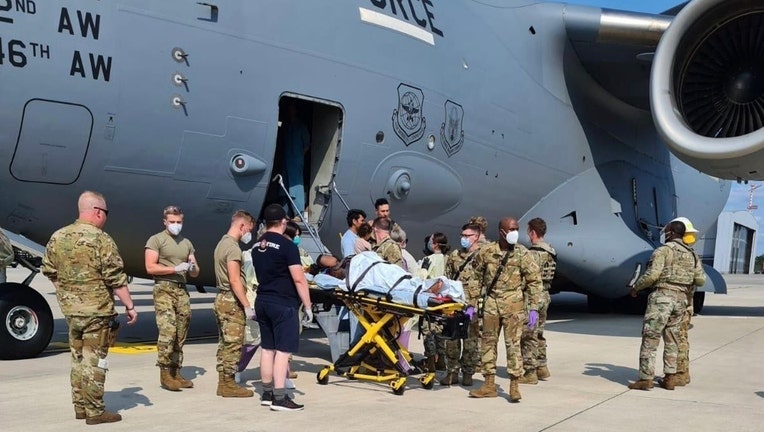 Personnel from the 86th Medical Group and Landstuhl Regional Medical Center help an Afghan mother and family off a U.S. Air Force C-17, call sign Reach 828, moments after she delivered a child aboard the aircraft, Ramstein Air Base, Germany, Aug. 21,

WASHINGTON - The Afghan baby girl born on a C-17 military aircraft during an evacuation flight from Afghanistan will forever carry that experience with her. Her parents have named her after the plane's call sign — Reach.

The head of U.S. European Command told reporters Wednesday that officials had spoken to the mother and father of the child, who is the only one actually born on an evacuation flight. Gen. Tod Wolters says the parents decided to name her Reach because the transport aircraft's call sign is Reach 828.

She was born Saturday, and members of the 86th Medical Group helped in her birth as the plane flew from Kabul to Ramstein Air Base in Germany.

European Command says the mother went into labor during the flight and began experiencing complications due to low blood pressure. The pilot descended in altitude to increase air pressure in the aircraft, which helped stabilize the mother. Military medical personnel delivered the baby in the plane's cargo bay.

Wolters says the baby and family are all in good condition.

Two other babies whose parents were evacuating from Afghanistan have been born over the past week at Landstuhl Regional Medical Center, the U.S. military hospital in Germany.

RELATED: Afghanistan evacuations: A look at where the situation stands