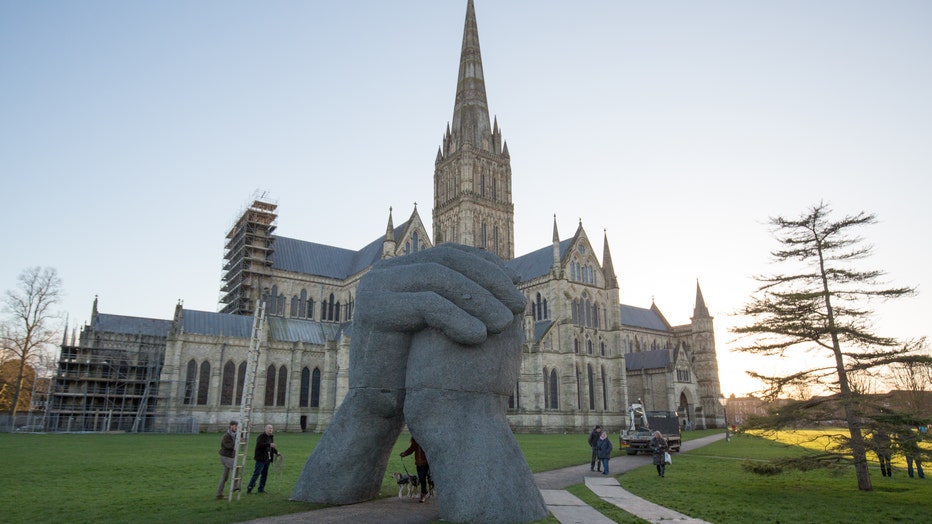 SALISBURY, ENGLAND - FEBRUARY 10: Sophie Ryder's sculpture The Kiss, is installed in the grounds of Salisbury Cathedral as part of an exhibition by the artist on February 10, 2016 in Salisbury, England. The solo exhibition, Relationships, featuring l

Walking while texting can be dangerous—a fact that was recently reconfirmed in England.

A 20-foot-high sculpture of two clasped hands that formed an archway over a path on the grounds of the Salisbury Cathedral in Wiltshire had to be relocated because walkers kept bumping into it (despite the 6 feet, 4 inches of clearance beneath the center of it), the BBC reports.

In a Facebook post last week that showed "The Kiss" being moved by crane, artist Sophie Ryder wrote the galvanized steel wire sculpture was moved "because people were walking through texting and said they bumped their heads! Oh well!!"

A cathedral official didn't specify texting as the issue, but said "during the hours of darkness" there were some incidents.

The sculpture was installed earlier this month as part of an exhibit on the cathedral lawn, reports the Telegraph; the show runs through July 3.

The dangers of texting while walking are well documented. See: the woman who took an unintended dip in a frigid canal in Birmingham, England (her surname, ironically, was Safe), and the lady in Pennsylvania who took a header into a shopping mall fountain.

In 2014, more than 2,500 pedestrians ended up in the ER for accidents related to cellphone distraction, Fortune reports. That happened fewer than 250 times in 2006.

Rather than pocketing their smartphones, however, pedestrians have developed a protective gait, according to NPR. Researchers found that while navigating an obstacle course and using a smartphone, "people actually slowed down and engaged in a more protective or cautious walking pattern," says an author of the study.

This article originally appeared on Newser: 20-Foot Sculpture Moved After Texters Kept Bumping Into It