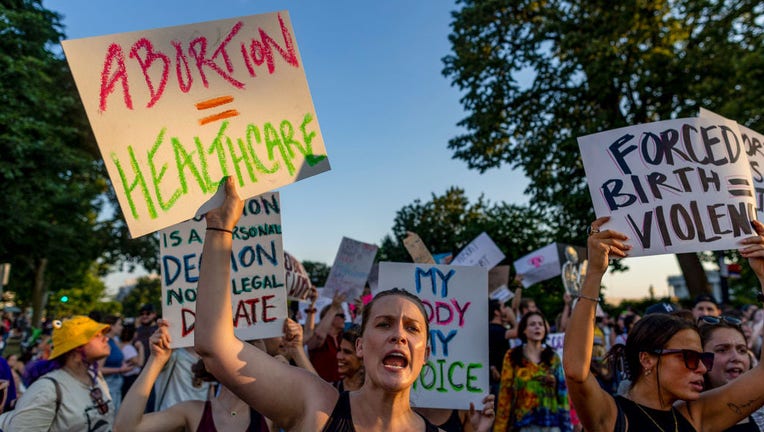 Protesters gather in the wake of the decision overturning Roe v. Wade outside the U.S. Supreme Court on June 25, 2022 in Washington, DC. (Tasos Katopodis/Getty Images)

A 10-year-old girl was denied an abortion in her home state of Ohio and had to travel to Indiana to have the procedure performed, according to multiple media reports.

The young rape victim was six weeks and three days pregnant but was not allowed to have an abortion in Ohio because the state bans the procedure after six weeks when fetal cardiac activity may be detected.

An Ohio child abuse doctor, who determined the term of the girl’s pregnancy, referred her to Indianapolis obstetrician-gynecologist Dr. Caitlin Bernard, three days after the Supreme Court ruling, the Indianapolis Star first reported. An abortion ban had not taken effect in Indiana and the girl traveled to Bernard’s office to have the procedure.

There were no additional details about the girl’s situation or the circumstances of what happened possibly based on her age, according to a Huffington Post story.

The report comes in the aftermath of the Supreme Court’s ruling to overturn Roe v. Wade on June 24.

Before the Supreme Court’s decision, Ohio did not ban most abortions until the 22nd week of pregnancy. But the state has since imposed a host of other restrictions, including parental consent for minors, a required ultrasound, and in-person counseling followed by a 24-hour waiting period. Abortions are prohibited for the reason of a fetal Down syndrome diagnosis. Ohio also limits the public funding of abortions to cases of rape, incest or endangerment of the patient’s life.

A ban on most abortions at the first detectable fetal heartbeat became the law in Ohio hours after the Supreme Court ruling. Enforcement of Ohio’s 2019 "heartbeat" ban had been on hold for nearly three years under a federal court injunction.

Abortion in Indiana is legal for up to about 20 weeks, with some provisions for medical emergencies. Before an abortion, patients must undergo an 18-hour waiting period. Medical providers must tell patients about the risks involved in abortion and must say the fetus can feel pain around 20 weeks, which is disputed. Providers must report complications related to abortion.

After the SCOTUS ruling, there were no immediate changes to Indiana’s abortion law, but the state’s Republican attorney general has asked federal judges to lift orders blocking several state anti-abortion laws. Those include one aimed at prohibiting abortions based on gender, race or disability, and another banning a common second-trimester abortion procedure that the legislation called "dismemberment abortion."

The Supreme Court’s reversal of Roe v. Wade has been a divisive issue for many with abortion advocates praising the decision, while abortion supporters expressed their anger and disappointment and vow to fight to protect women’s rights.

The June 24 ruling was expected to lead to abortion bans in roughly half the states. The decision also set up the potential for legal fights between the states over whether providers and those who help women obtain abortions can be sued or prosecuted.

Several Republican-controlled states had already passed strict abortion bans in recent years. Some of these "trigger laws" are now going into effect, while some are being blocked, at least temporarily. In some states, older laws that became null and void because of Roe are now resurfacing. The most liberal states are seeking to add more protections.

FOX 2 Detroit, FOX 5 DC, and the Associated Press contributed to this story. This story was reported from Washington, D.C.