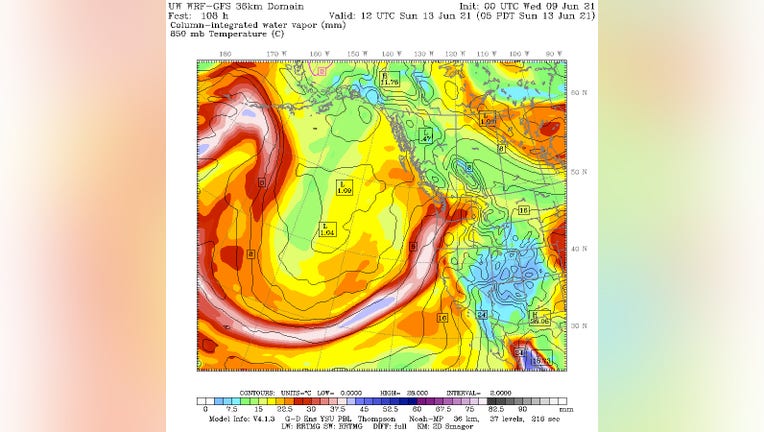 SEATTLE - One of the many reasons Seattle's climate is generally comfortable is that it's either cool and humid or warm and dry, but it's exceedingly rare to be warm and humid at the same time.

Sunday will challenge that notion.

A very rare-for-June pattern is setting up for this weekend with a fetch of warm, tropical moisture being pulled into the Pacific Northwest, carried on the back of a low pressure center passing by off our coast.

Reminiscent of "Pineapple Express" weather patterns in the winter when we pull in air from the tropics near Hawaii, this is not only expected to bring a period of heavy rains on Sunday, but some very humid air along for the ride -- perhaps the "muggiest" air in a decade.

Forecast charts are suggesting the dew point -- the temperature at which the air becomes saturated -- to reach into the low-mid 60s on Sunday. The highest dew point recorded in Seattle in the past 13 years or so is 66 degrees set on Sept. 27, 2010, according to meteorologist Joe Boomgard-Zagrodnik.

Why does that matter? Dew points are a good measure of comfort as warmer air can hold more moisture, so when dew points are high, it means the air feels muggier since it's carrying more water.

In the Pacific Northwest, dew points are rarely an issue, and likely why you probably never hear local meteorologists talk about them much. The water temperatures off our coast are in the 50s, so while the air is moist when it blows in off the ocean, it's also relatively cool. Dew points on most days here spring through autumn stay in the 40s to low 50s which is quite comfortable. Even if the humidity is near 100% as it is on many mornings or rainy days, the air is cool enough that your body isn't fighting to sweat and cool itself so you don't notice this humid air.

Our hotter days are in tandem with an offshore wind from Eastern Washington where it's already dry, and can dry further as it sinks down the Cascades. As a result, dew points are quite low on the hot days so while the heat may not be comfortable, at least it's a dry heat.

But when temperatures and dew points rise, the air is carrying more water vapor making it more challenging for your body to cool itself. That's the case Sunday as dew points rise into the 60s -- very rare and lofty levels and a point where Northwestererns will surely note it as unusual… and probably uncomfortable.

Now, if you post this on social media, will you get any sympathy from your friends in the South, Midwest or East?

We'll be coolish and showery heading into the weekend.

Dew points in the 60s are common to just about an every-day occurrence east of the Rockies in the summer, with some areas in the South and East routinely crossing 70 degree dew points. The Gulf of Mexico has bath-water warmth to it much of the year, pumping a lot of warm and moist air into the eastern 2/3 of the country. Houston, for example, had a reading of 81 degrees with a 78 dew point Thursday morning, which is advanced level yuck.

So a dew point of 63-65 is nothing to them. And to top it off it won't actually be all that hot here with highs in the 70s, but it will likely feel like it's in the 80s with the humidity.  But it will be raining quite heavily at times -- the second factor of this tropically-fed weather system. Showers will be heavy at times on Sunday into Sunday night amid the muggy warmth. And these will not be the traditional "oh, it's raining but I won't get too wet to care" Seattle showers. These will be tropical deluges that will drench you in an instant with large raindrops and intense rates. Dare we make an exception and allow Seattleites to carry an umbrella Sunday with the looks of shame?

It does not look like hours-upon-hours of steady rain -- more like periods of passing heavy showers, but some indications are rainfall rates could be around 1"-per-hour, so that could make for very quick standing water and low visibilities during the storms.   The National Weather Service says the amount of moisture this storm is carrying is above the 99th percentile for June in Western Washington.

The heavy rain showers hold through Sunday night then begin to taper off Monday morning as dew points should drop back to normal and we get some semblance of normalcy, though showers do remain in the forecast early next week.

In the meantime, plan on getting a taste of the tropics. Maybe some flamingo décor on your lawns to give it that Florida feel could be in order.