WSDOT and WSP officials say if you don't need to travel, stay home.

SEATTLE - Frigid cold temperatures took over the region again Thursday with only a high of 25 at the airport. We haven't been temperatures this cold at Sea-Tac since Nov. 23, 2010.

Other locations north along the I-5 corridor were even cooler, like Bellingham at just 20! 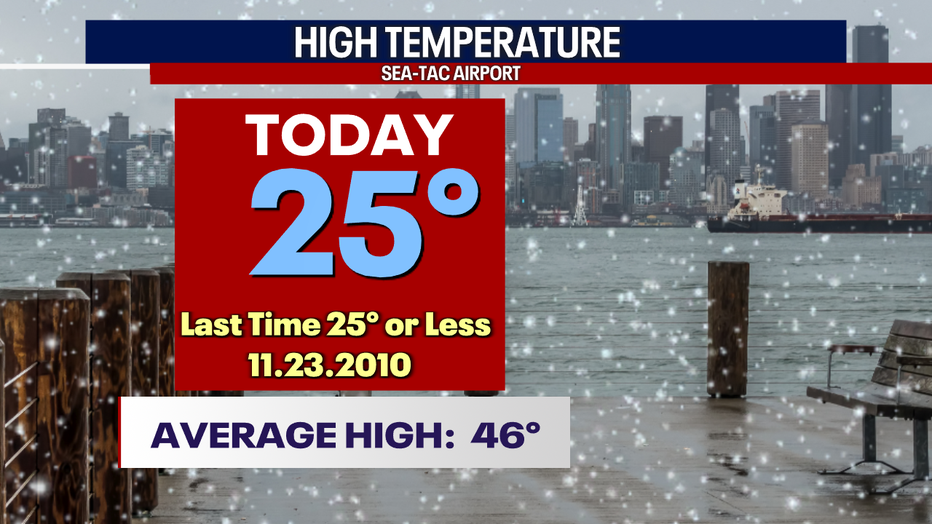 As temperatures warm into Friday and the weekend, we will eventually move back to just plain old rain, but that transition will not happen until later in the day Friday.

Until then, watch out for icy roads tomorrow morning making for very dangerous travel. 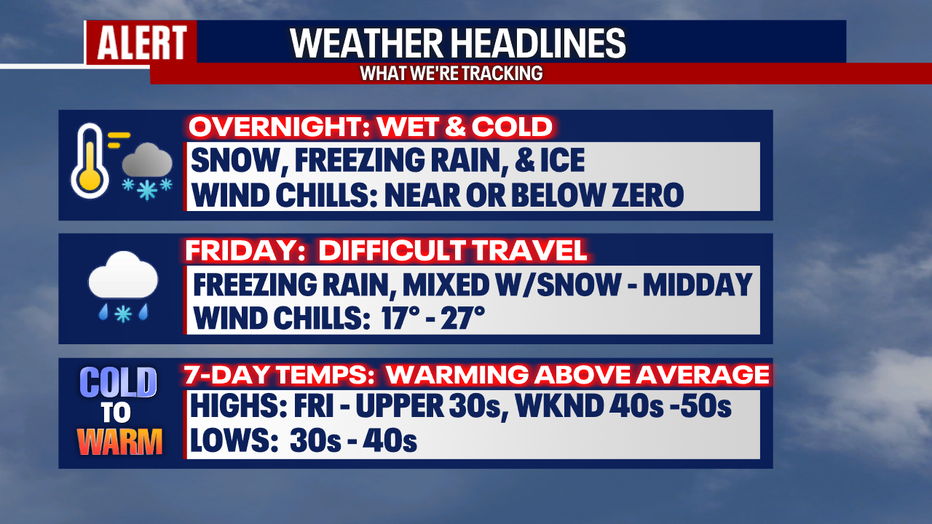 With a storm like this one, it is very difficult to pinpoint the exact amount of potential freezing rain. Our FOX Weather Team is forecasting anywhere from a tenth of an inch to a quarter inch to fall with some areas, like the southern foothills into the Cascade, seeing up to half an inch.

With freezing rain there is always the risk of not only widespread problems on the ice-glazed roads, but the chance for power outages as ice can quickly snap tree branches and freeze power lines. 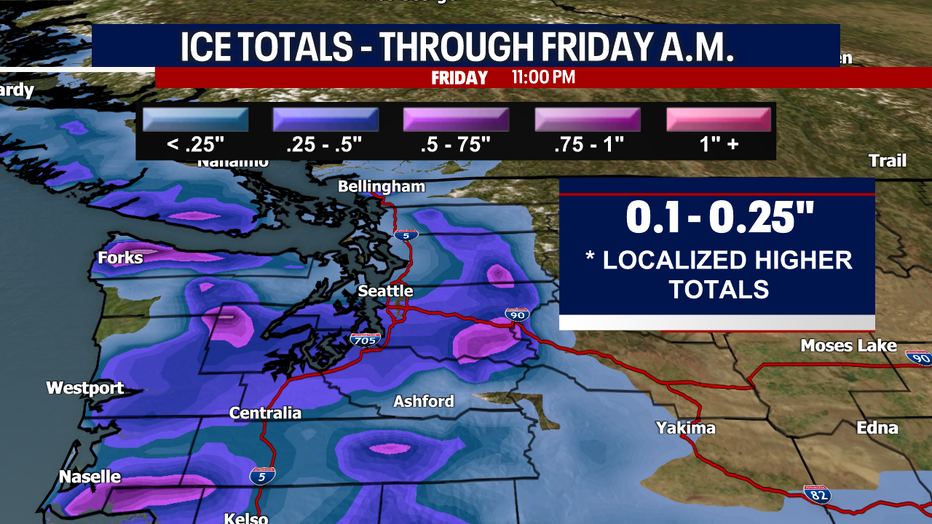 Here's a peek early Friday at 3 a.m. when our weather is the most active. The snow-freezing line settles in nearly on top of Seattle pushing out snow to the north and over the mountains with a wintry freezing mix to the south. 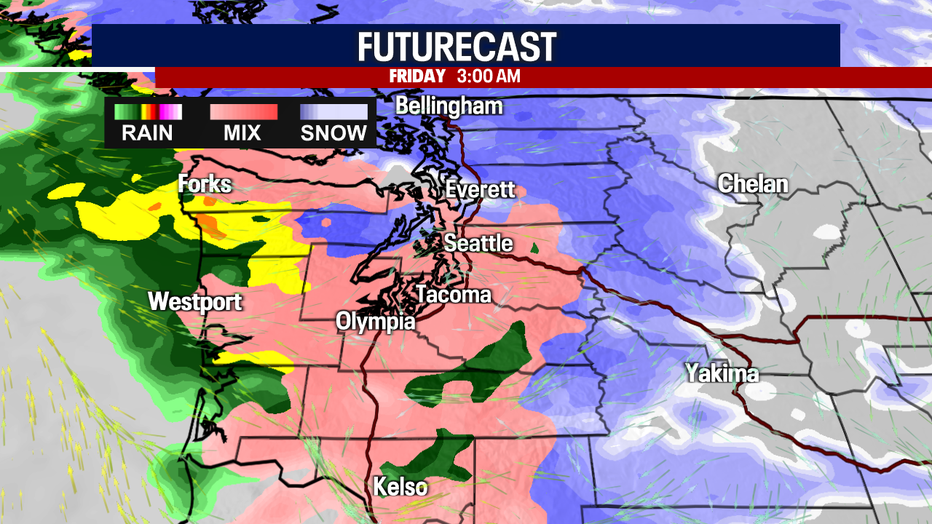 By 6 a.m., showers let up some to the south, but roads will remain a mess. Snow continues to dump east of the mountains. 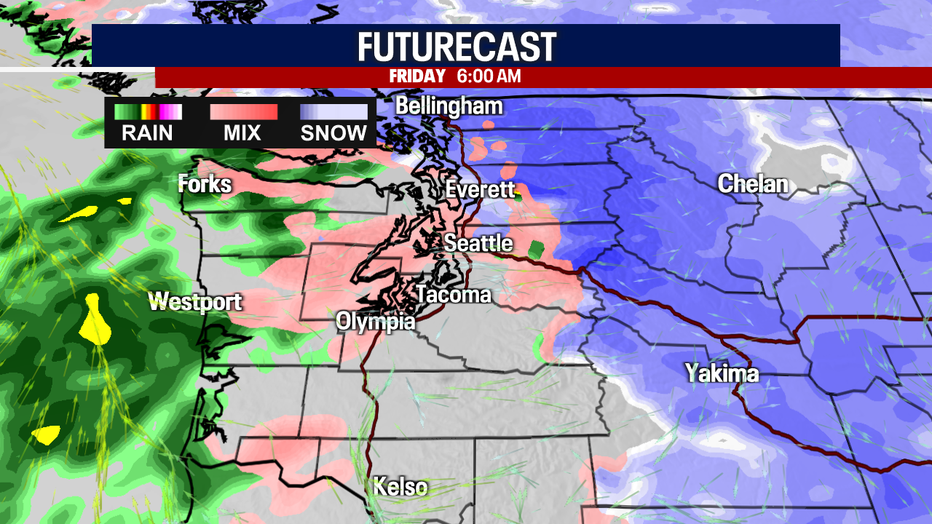 Wake-up temperatures range from just 19 in Bellingham to a warm 27 for Chehalis. East of the Cascades, lows dip below zero with Stevens Pass at -11. 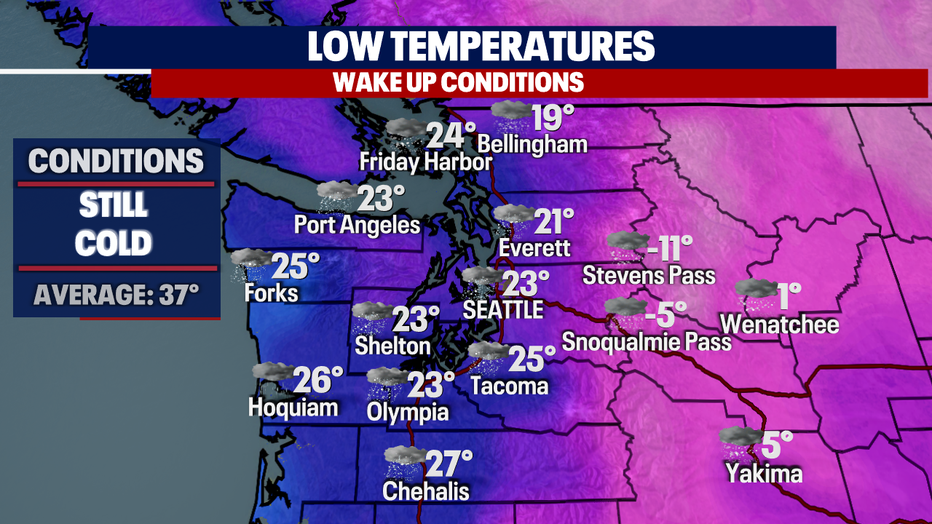 The good news is we trend warmer all around as we sail into the holiday weekend.  Lows really warm up into the upper 30s to upper 40s by Monday. High heat into the upper 40 to the low 50s, something we have not seen in quite some time. 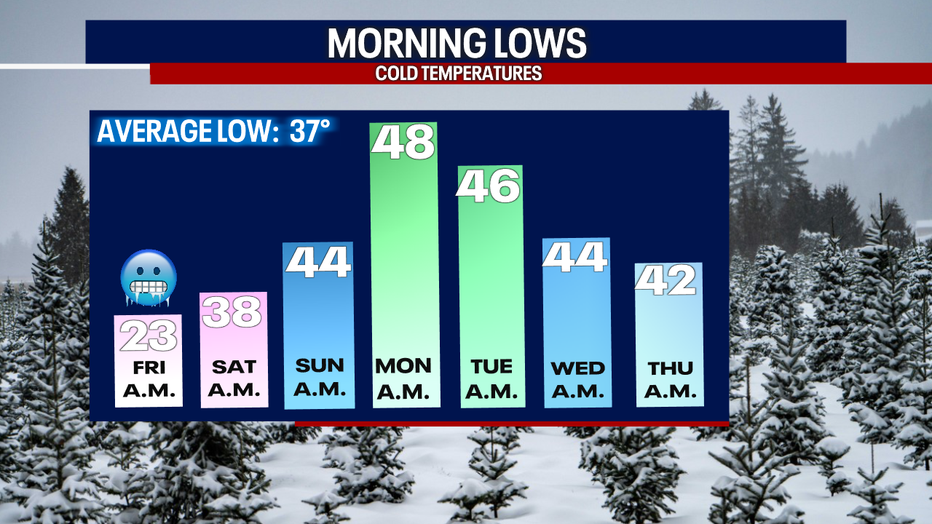 As we warm up all that snow and ice will start to melt and threaten area waterways.  The potential for urban flooding will come into play. Please be aware of major ponding around community roads. Area creeks and streams will start to rise as well. Snow levels will push up into the 6,000'-7,000' range through Sunday. 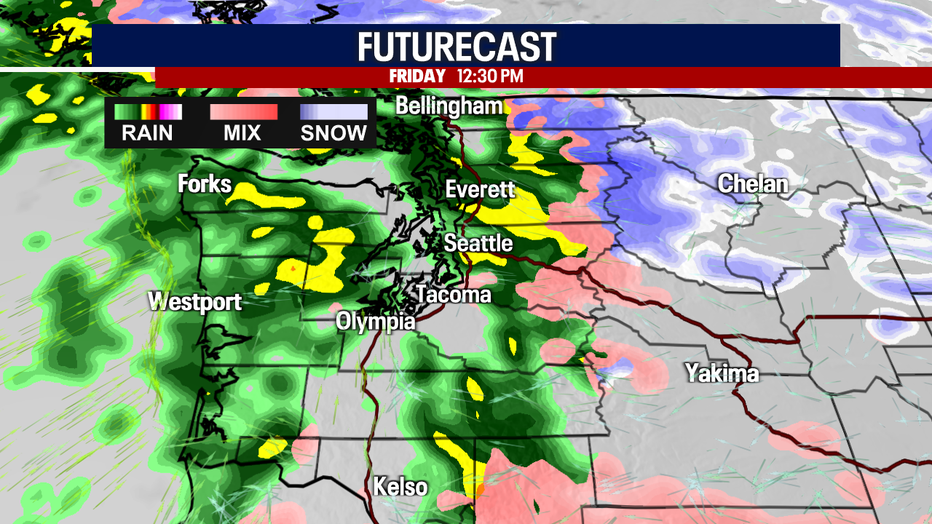 Our temperature trend is impressive-- we go from a cool 38 Friday to a balmy 52 by Monday. 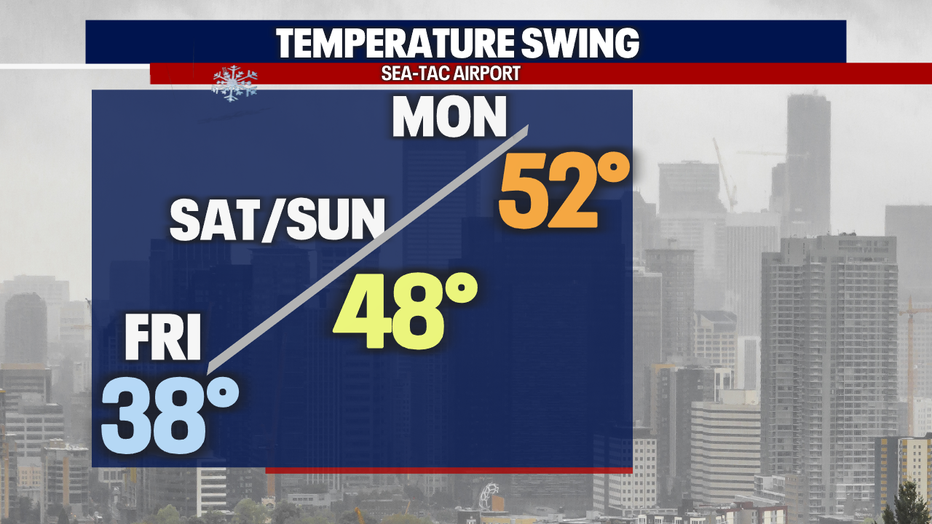 We're dialing up more wet weather for the holiday weekend.  Get ready for a series of atmospheric river to hit the region. We do expect moderate to heavy rain as these systems slam into Puget Sound. And again, as temperatures warm and snow levels rise we'll start to battle an excessive amount of water rolling downstream. 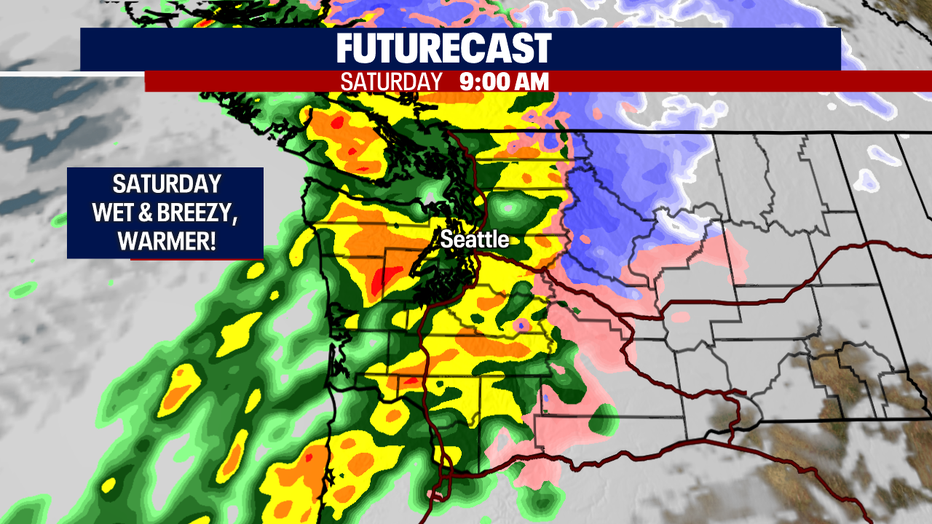 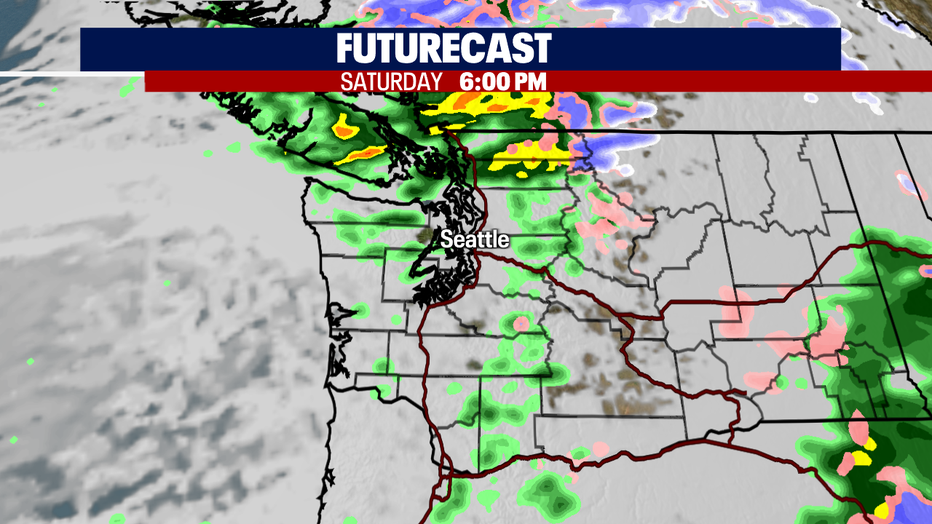 Rain keeps coming as we close out the month of December and head into the new year.  Highs will remain at average or slightly cooler into January.  Enjoy

Happy holidays everyone! Stay safe out there this weekend.  ~Erin Mayovsky, FOX 13 Forecaster 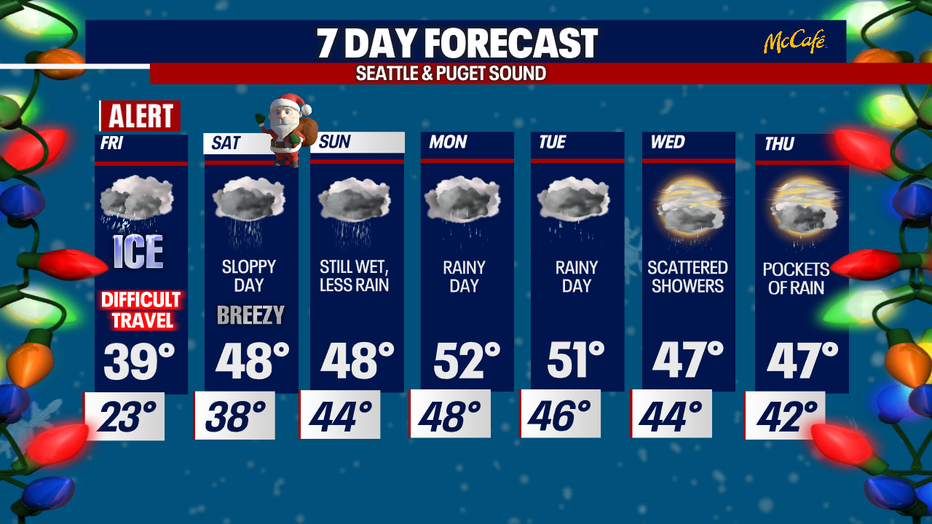