We are now into that traditional Fall pattern where systems will continue to find their way into the region. We expect a few showers early Thursday for the North Sound, but most of the day will remain dry, but winds will whip through the area.

It will be a gusty day in some backyards today, especially along the North Sound, Salish Sea and North Coast. The evening commute could be sloppy for those same communities. For the most part, the rain will not arrive in places like Everett, Seattle, Tacoma and Olympia until after the sun sets.

The highest rain totals will be found in Whatcom and Skagit Counties. Neighborhoods like Forks, Neah Bay and La Pusha could also see rain amounts totaling an inch. Elsewhere in Puget Sound, 0.3-0.6 inches are expected: this means that while roads will be slippery, rain won't be a major event for most.

As we get deeper into fall and winter, we will have to keep a close watch on local burn scars as rounds of wet weather. Even though we are not necessarily expecting debris flows, landslides and flash floods over these burned areas today, we need to monitor the situation carefully. 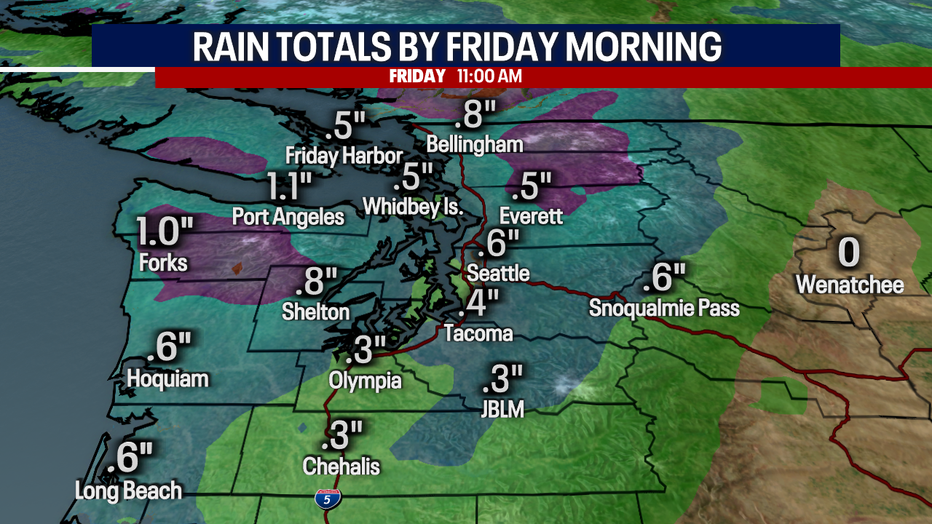 A big heads-up: there is a Wind Advisory in effect for the North Sound until 8 p.m. The alert is posted for the North Coast as well until 5 p.m. Gusts of 40-50 mph could lead to isolated power outages and minor damages. Secure any outdoor Halloween decor! Elsewhere in Western Washington and Puget Sound, gusts could reach 20-35 mph. 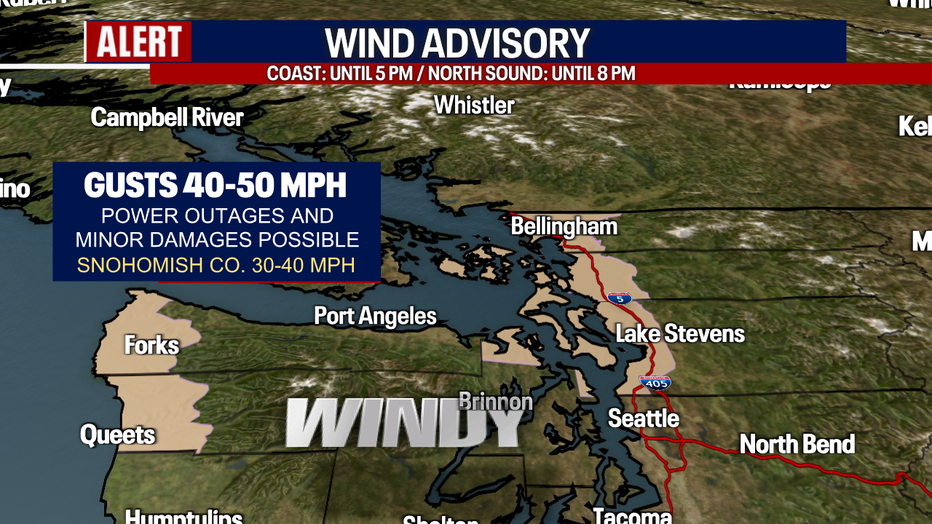 Highs today will reach the mid to upper 50s. Mostly cloudy skies with some afternoon sunbreaks are in the forecast. 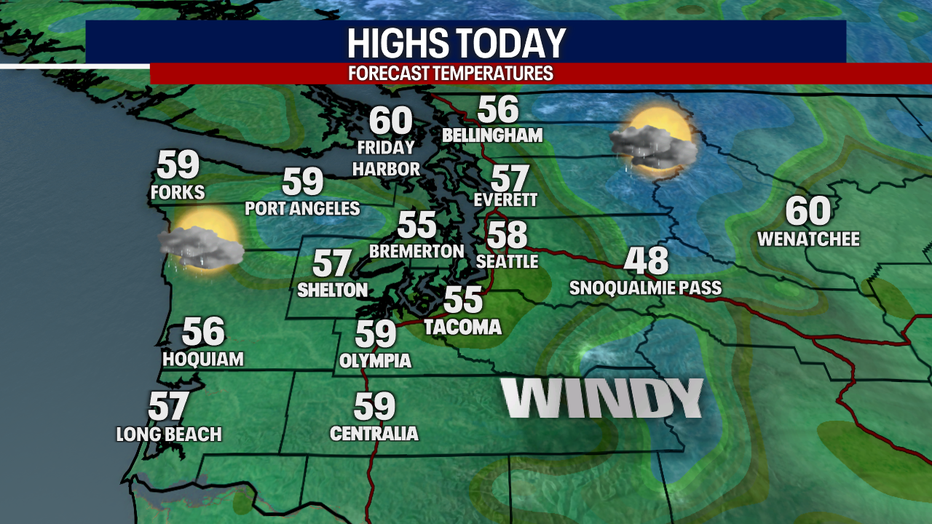 While there could be showers before daybreak Friday, tomorrow looks mainly dry. Morning clouds should be followed by afternoon sunshine.

On Saturday, we can't rule out a light, passing shower, but most neighborhoods will wind up dry. The morning could be gray, but sunbreaks are possible in the afternoon. 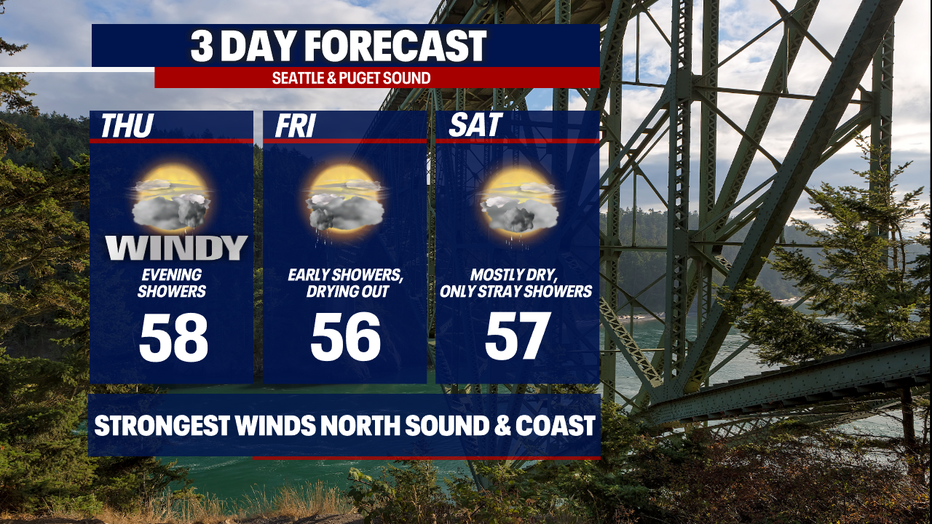 Let's talk about the forecast for the mountains. Today and Friday, you can expect snow levels to stay high: AKA, the passes should be rainy vs snowy.  By late Monday into Wednesday, snow will pile up over Stevens, White and Snoqualmie passes. 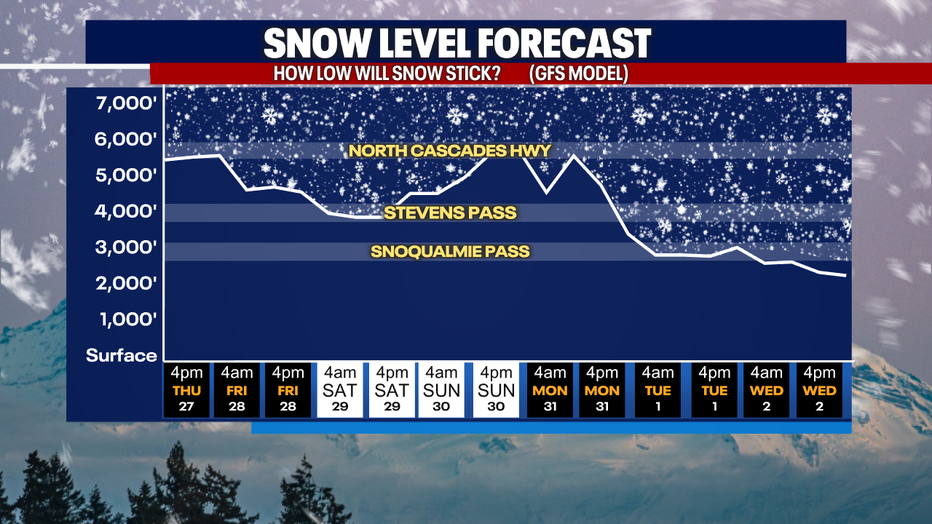 Here is a glance at our new seven-day forecast! Sunday will be rainy and gusty. If you are going to the Seahawks game Sunday, make sure to dress for soggy weather. Unfortunately, Halloween looks damp. We will keep you posted on that! Tuesday and Wednesday will start rather chilly. Lows in the South Sound and outlying areas could plunge to nearly 32 degrees. Driving could be difficult over the mountain highways where snow could create messy roads. 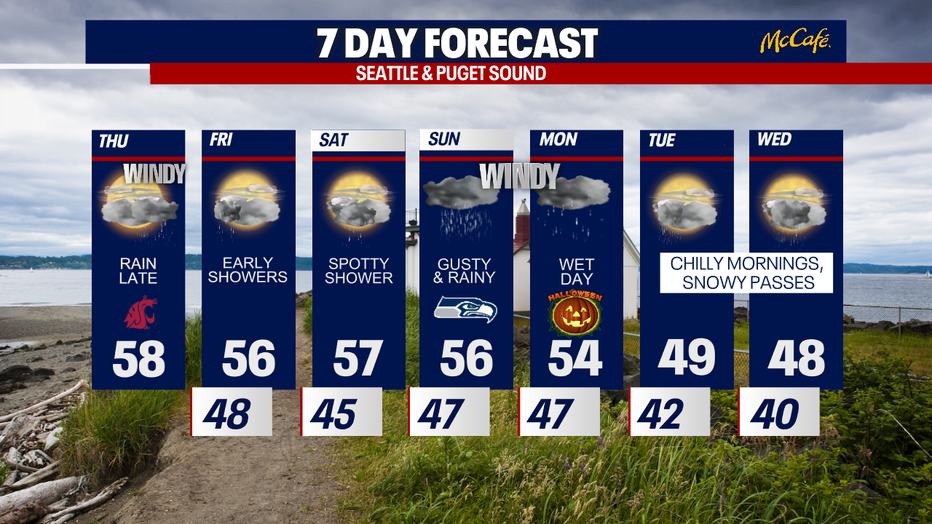 Thanks so much for choosing FOX 13. We appreciate your viewership!