Powerful winds knocked out power to tens of thousands of people across Western Washington Friday night into early Saturday morning. Thankfully, the worst of the winds is over. However, river flooding and mountain snow will remain a concern today.

A Wind Advisory expired at noon for western Snohomish County, Whidbey and Camano Islands and Port Townsend. Later this afternoon, winds ease. It will stay breezy into Sunday, but winds are not expected to be damaging like Friday night.

As of Saturday morning, several Flood Warnings remain in effect for local rivers. For the most part, minor river flooding is in the forecast. The exceptions to this are the Snoqualmie River near Carnation, the Snohomish River and the Skokomish River in Potlatch where moderate flooding is possible. Water levels recede tonight. Below are Flood Warnings in effect this morning. These alerts will likely change throughout the day today. Click here for more information from the National Weather Service Seattle office. 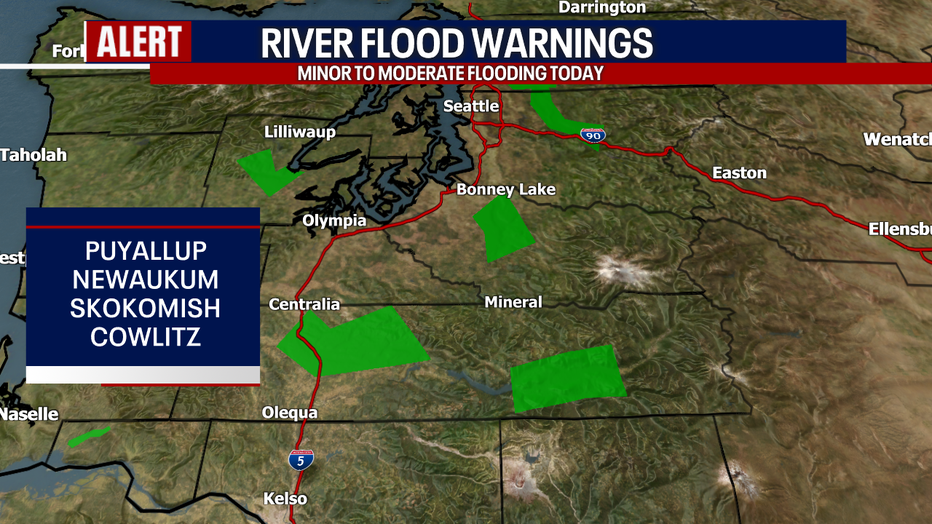 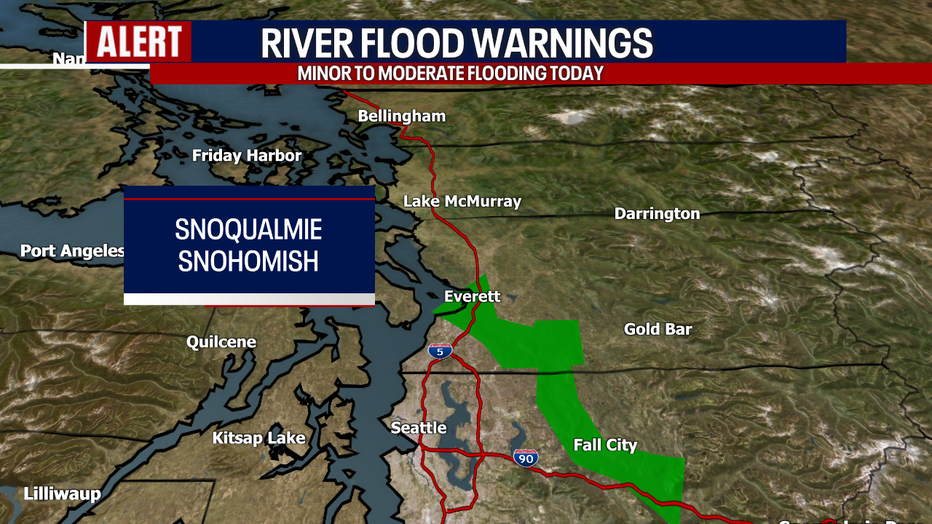 There is also a Flood Watch in effect for Whatcom County and the South Sound until 5:00 p.m. today. Flooding is possible over local rivers, streams and creeks. We even cannot rule out super localized street floods where storm drains are clogged with leaves. Remember to never drive into flooded waters! 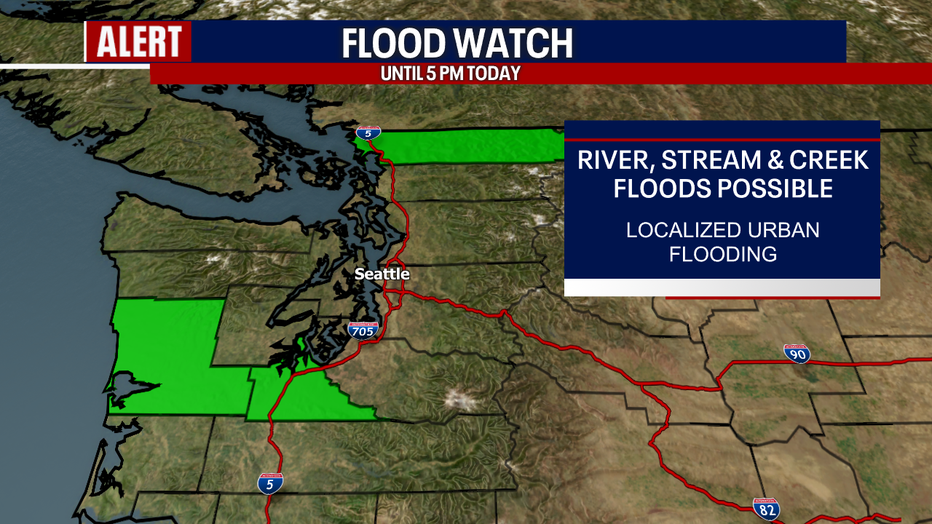 It is easy to see why river flooding has been an issue. The rain totals over the mountains are impressive, boasting five to nine inches over the South Cascades! 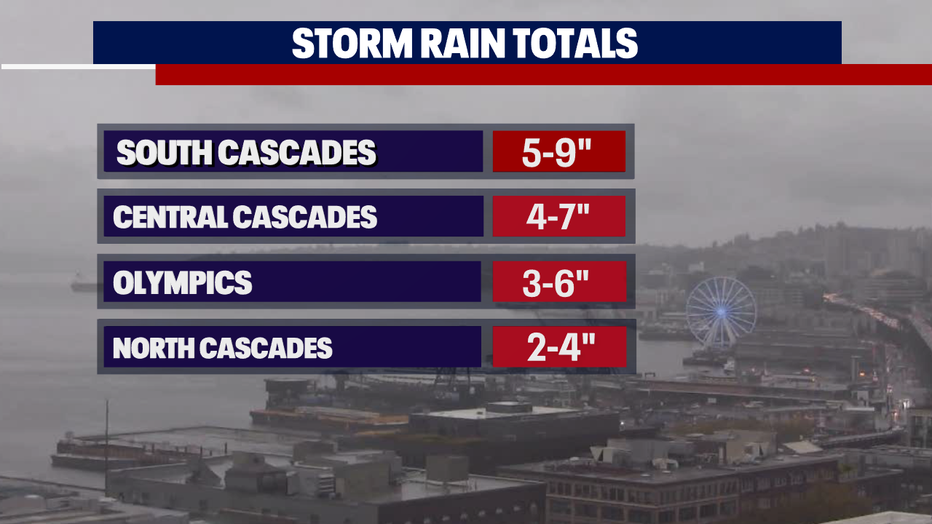 Mountain snow could create big problems over the passes, especially tonight and Sunday morning. A Winter Weather Advisory is in effect for all the highlighted areas above 2,000 feet. Between five and 18 inches of snow could pile up over the passes: I realize that is a big range of projected snow totals. This is because accumulations with this event depend heavily on where the strongest bands of snow develop, particularly where a convergence zone pops up. 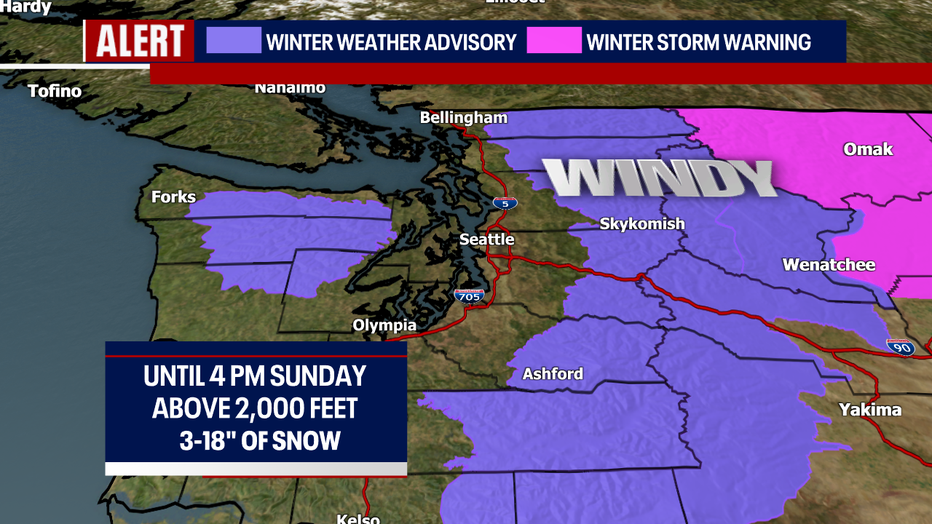 For everybody else in the lowlands today, you can plan on sunbreaks and showers with highs only reaching the mid to upper 40s. Rain could be heavy at times. In some cells, there could be lightning, small hail and graupel, especially along the coast. 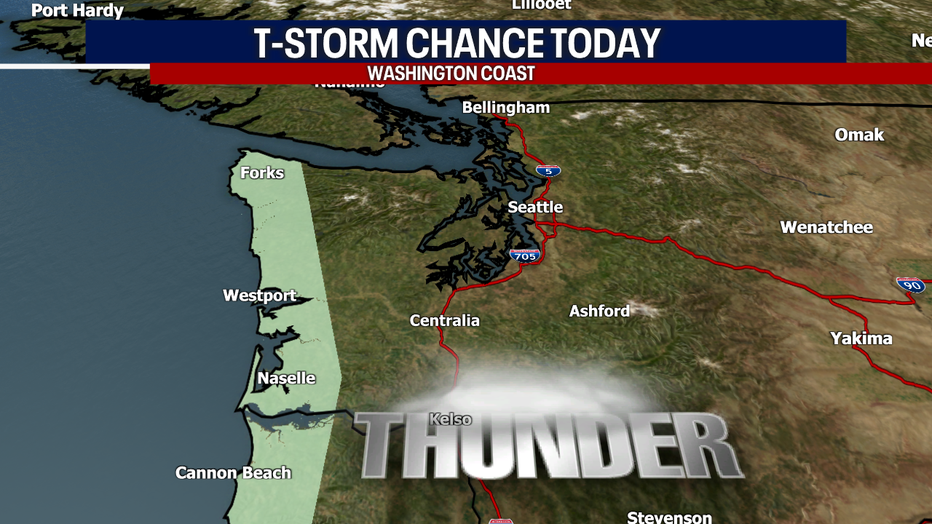 The rainy and windy weather Friday was due to an "atmospheric river" event. This morning, that fire hose of moisture is moving south, making way for our next weather maker. Throughout the day on Sunday, an area of low pressure will track south off the Washington coast. This storm system will push an occluded front through our backyard late tonight into early Sunday. This front will give us widespread lowland rain and mountain snow. Wind gusts will probably range between 20-30 (maybe 35) mph. 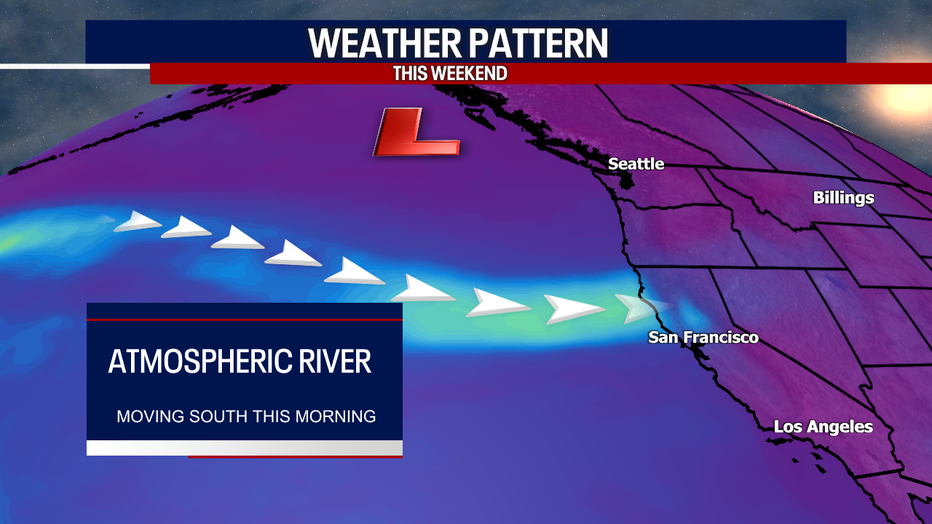 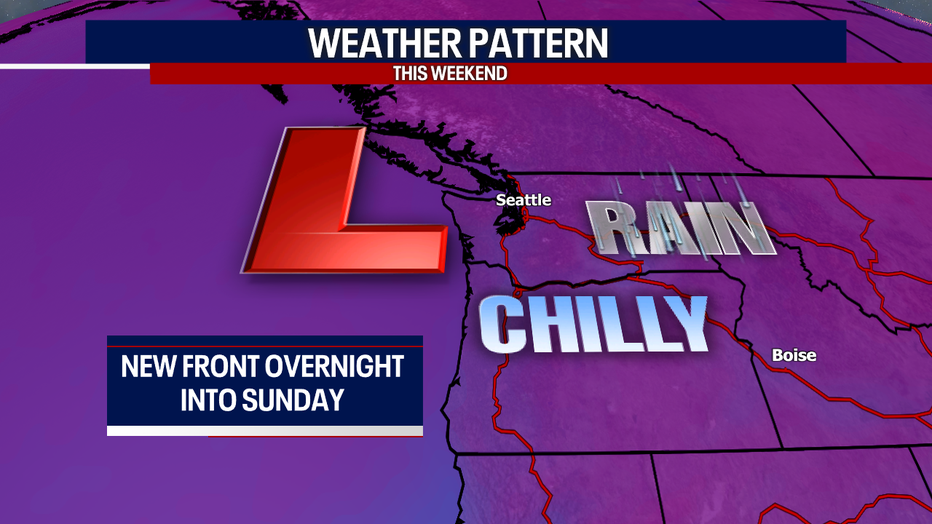 Here is a look at Futurecast today and tomorrow: 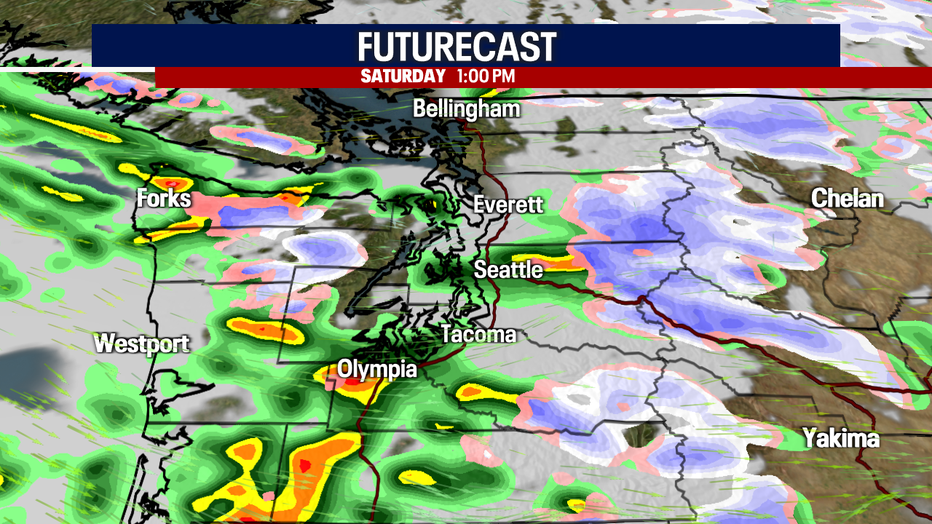 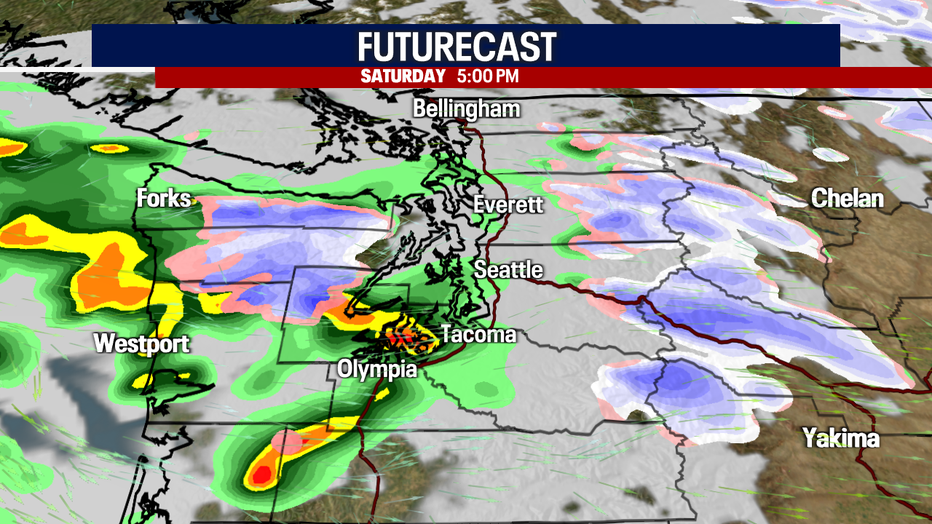 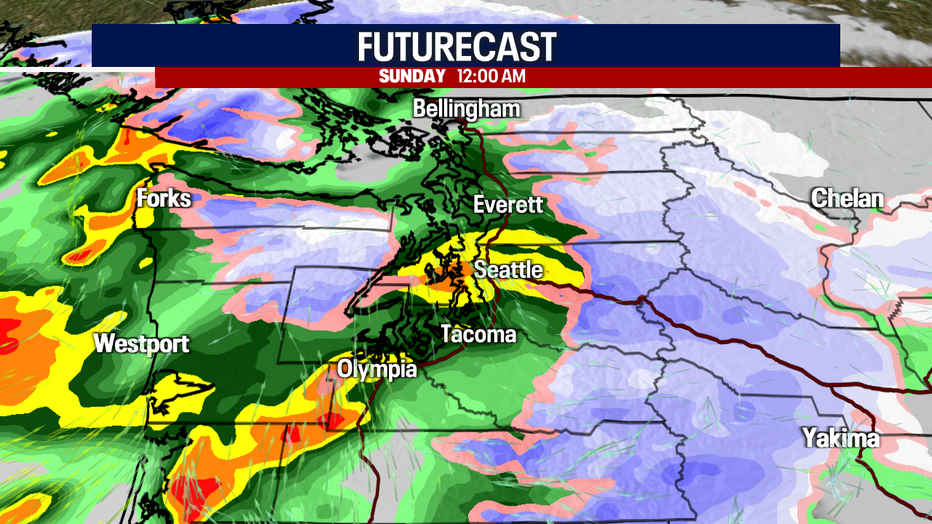 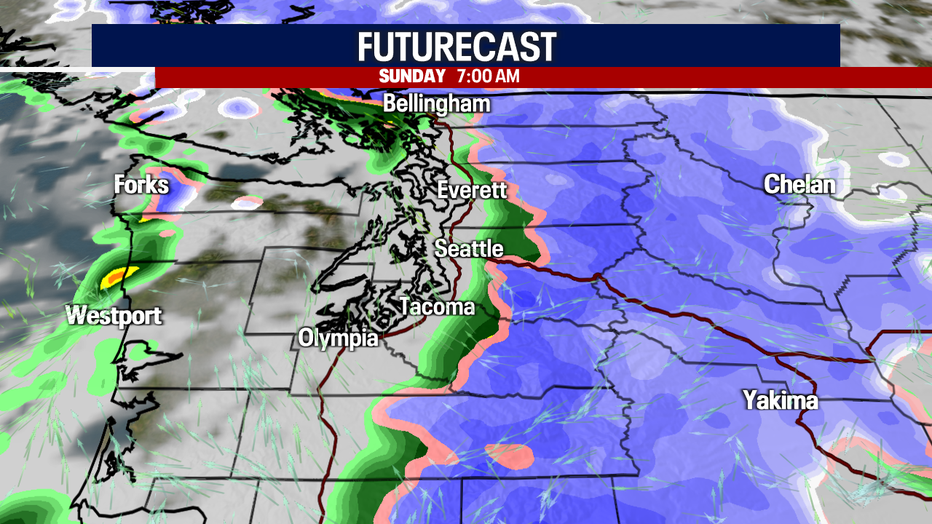 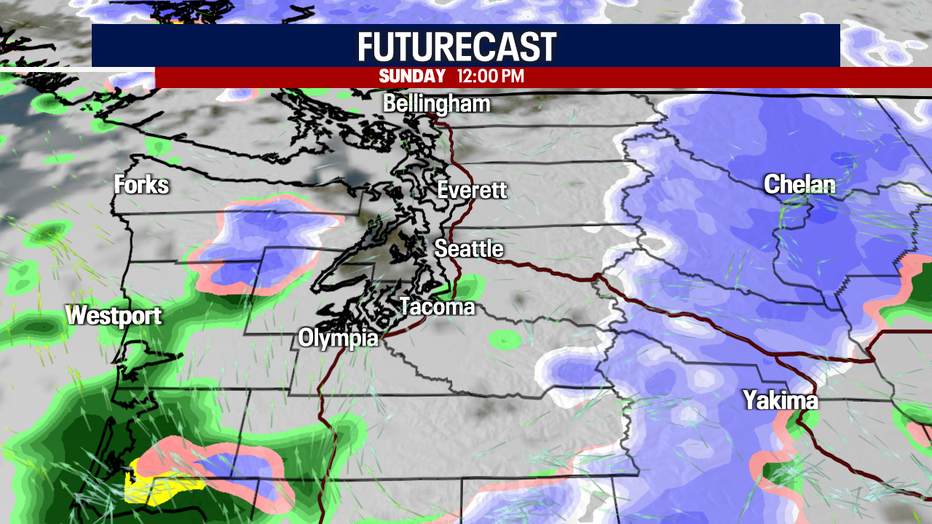 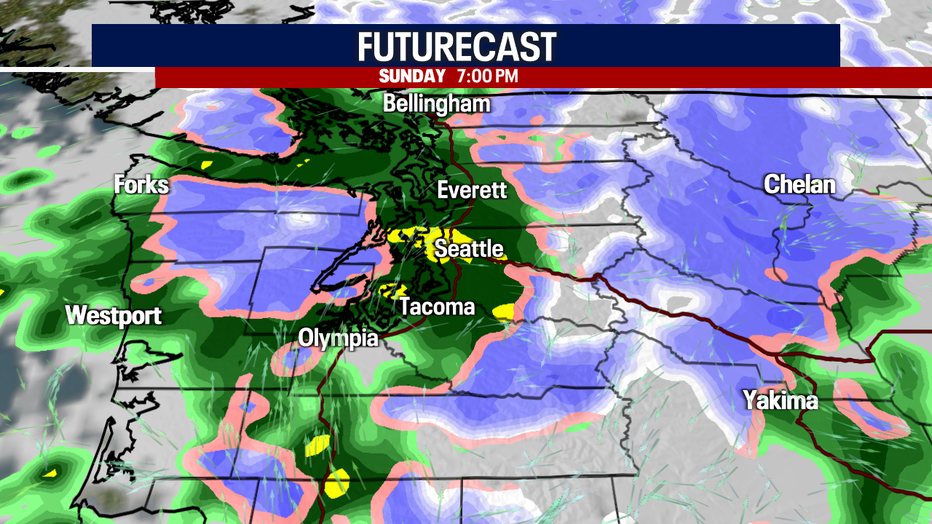 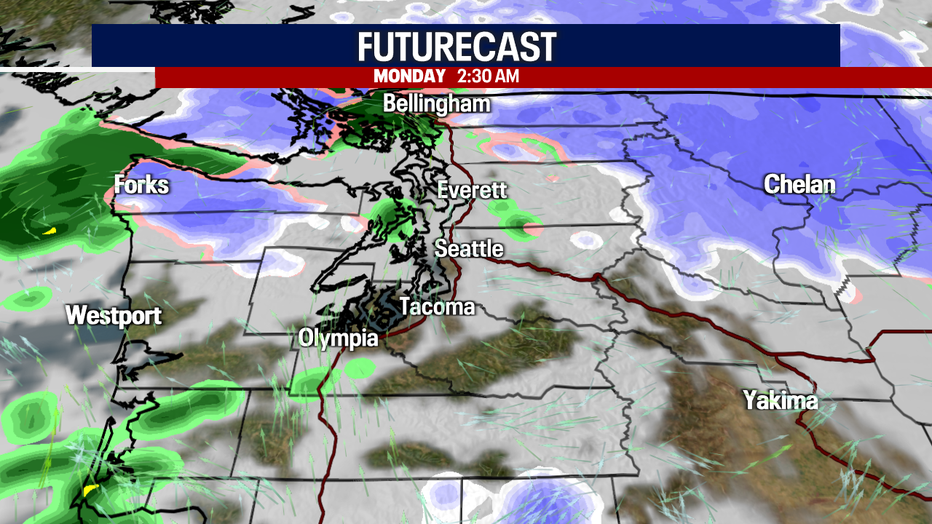 Early Monday, snow levels will drop to about a thousand feet. It is possible some of the foothills could see snowflakes, but accumulations at that level are unlikely. Isolated showers are in the forecast Monday. Tuesday will wind up mostly dry.

The big weather story throughout the workweek will be the plunging temperatures. Temps plummet to the mid to upper 20s Wednesday morning! The weather looks dry Tuesday through Friday. Otherwise, we could be talking about lowland snow…! It'll be nice to have drier weather beginning Tuesday after a very stormy weekend. 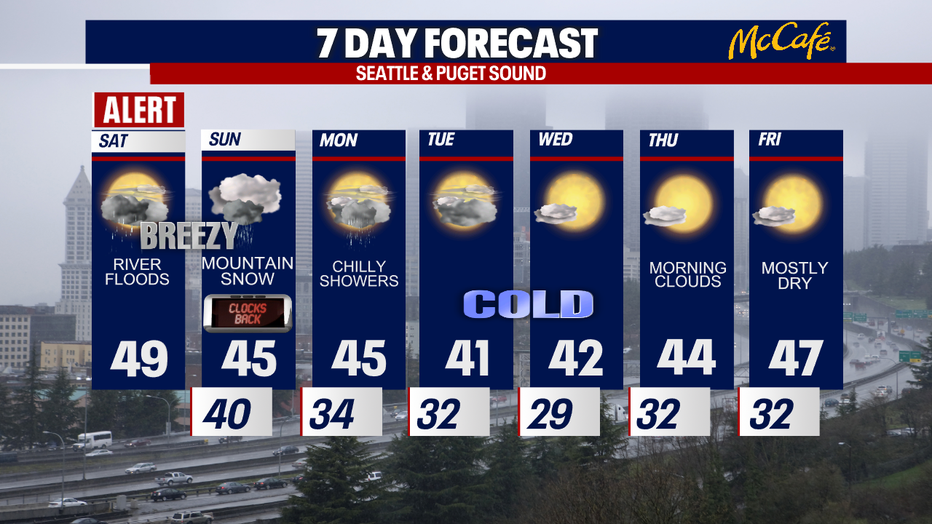 Don't forget to set your clocks back tonight!