Rain has moved east and Friday should be dry for the rest of the day.

Atmospheric rivers are torrents of tropical water vapor that carry copious amounts of rainfall to America's western shores via fall and winter storms — and hold as much water as 27 Mississippi Rivers! They are a critical boon for maintaining water supplies along parts of the West Coast, but sometimes they're too much of a good thing, and relentless rains can lead to extensive flooding and mudslides.

F. Martin Ralph and a team of researchers at the Center for Western Water and Weather Extremes at Scripps Institution of Oceanography, University of California San Diego, have recently developed a rating system to help emergency planners and water managers plan for atmospheric rivers.

Then by calculating the expected storm's duration and localized impacts on a region, they will rate the atmospheric river on a scale of 1-5, with '1' considered "weak" up to a '5' that is regarded as "exceptional."

But this AR rating system is different than traditional 5-point storm scales like the Enhanced Fujita Scale for measuring tornadoes or the Saffir-Simpson scale that rates hurricanes. Both of those scales use the storm's intensity as the primary criteria for assigning its rating, and the storms get the same rating across its affected area — the eyewall of a hurricane receives the same rating as areas nicked by the storm’s outer bands. 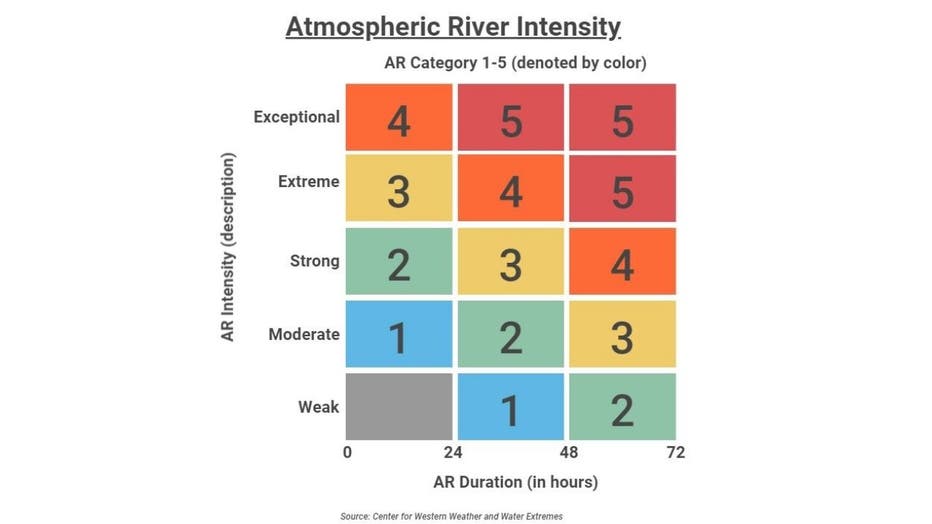 But the AR scale also factors a storm's duration and proximity to the storm when establishing a rating.

Meteorologists base the initial AR rating on the forecasted IVT at the storm’s landfall and assume the storm will last 24-48 hours. The scale uses 250 kilograms of vapor per square meter as the minimum criteria for an atmospheric river. Each increase of 250 kg/ms moves the rating up a category. So 250-500 IVT is a Category 1, 500-750 is a Category 2, etc. Anything over 1,250 is considered a Category 5.

But as mentioned before, the duration plays a role in the rating. If a storm is expected to last more than 48 hours, it will move up a rung on the scale, while any storm that is expected to blow through in less than 24 hours will be downgraded a rung.

Not all ARs are bad

The other unique aspect of the scale: Acknowledging some storms are beneficial. Atmospheric Rivers make up half of California's annual rainfall, and without them, an extreme drought would follow. To that end, forecasters consider a category 1 or 2 atmospheric river primarily beneficial. A storm rated AR2 that hit Northern California in November 2016 brought several inches of rain that helped replenish low reservoirs after a drought.

A category 3 is considered both helpful in some ways and potentially harmful in others, such as replenishing reservoirs but also causing some flooding issues.

Once you reach categories 4 and 5, it means those storms can do more harm than good (with category 5's considered "primarily hazardous.") An AR5 hit the central California Coast on Dec. 29, 1996, lasting 100 hours and causing over $1 billion in damages.

"(Level) 1's and 2's are largely beneficial, you know, we depend on our heavy rains, sometimes for our water supply," Ralph told FOX Weather. "But the 4's and 5's can become hazardous and produce tens to hundreds of millions of dollars of damage at times. We have the scale to help distinguish the two and communicate to the public and decision makers what the sort of magnitude of the incoming storm might be."

d finally, one storm will have multiple ratings depending on geographic location and expected impact from the storm. Atmospheric rivers, while powerful, can sometimes be relatively narrow, with effects lessening as you head away from the storm's "fire hose." The place where a significant AR is making landfall might be deemed to prepare for a Category 5 event, while locations a few dozen miles away may be given a Category 4… with Category 3 in spots farther away… then 2 and 1 toward no rating.

Ralph said that the scale "could provide a crucial tool to officials with an operational need to assess flood potential in their jurisdictions before storms strike."

Who receives the most ARs?

Their research found that Oregon is home to the most frequent hazardous ARs, averaging one AR4 or 5 a year, while Washington averages one of that magnitude about every two years.