More rain and wind is expected overnight in Western Washington.

SEATTLE - Sea-Tac International Airport saw a gust of 55 mph this morning! The good news is that the strongest winds are done for the day, but another round of gusts is on tap for late tonight into Tuesday. This next bout of blustery weather will stick around all day Tuesday and could trigger damages and power outages.

A forceful cold front whipped up the winds early Monday. Check out the reported wind gusts! Tens of thousands were without power this morning in Puget Sound. 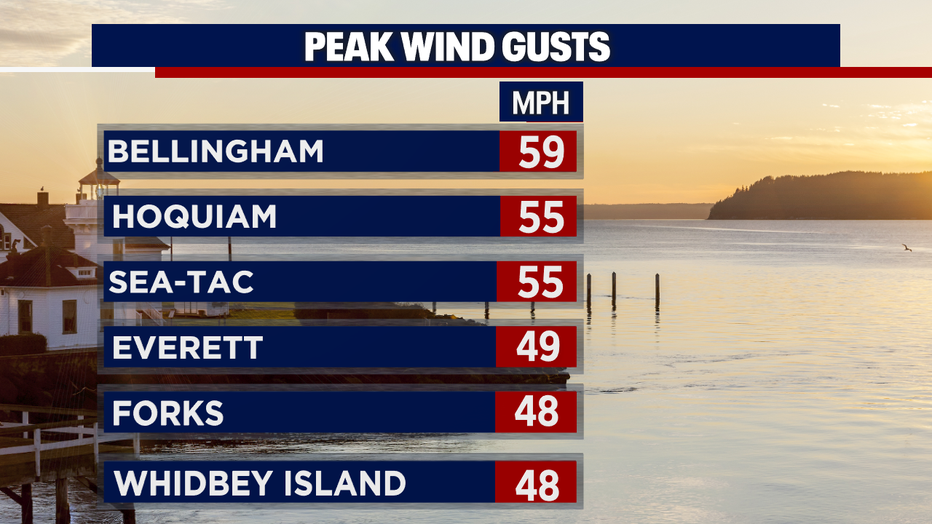 We've already hit our highs for the day, right before our cold front arrived. Check out the highs from this morning in the graphic below! Temperatures will fall into the upper 40s this afternoon. Keep a rain jacket with you for later tonight. 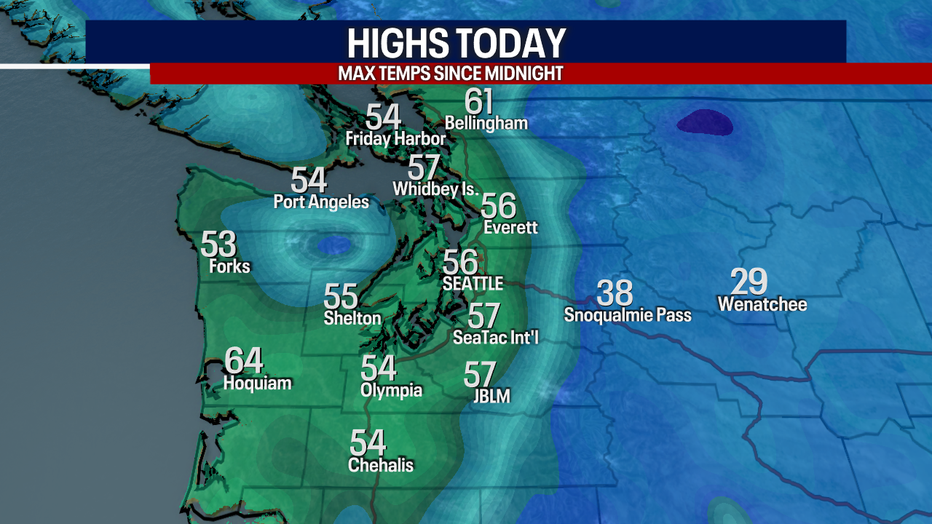 Due to the incoming winds, the National Weather Service has issued a few wind alerts for the coast. This is where the winds will be the most powerful. In the yellow, a High Wind Watch is in place for the Central and North Coast. This is where gusts could reach 55 mph between tonight and late Tuesday. For the South Washington Coast, a High Wind Warning is posted for gusts potentially blowing to 65 mph on Tuesday. 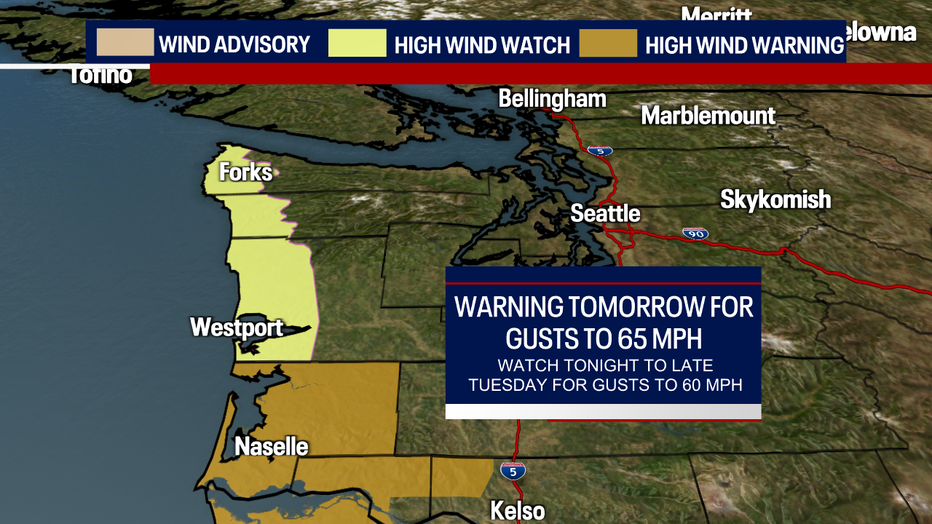 Elsewhere in Puget Sound, gusts could blow between 20-40 mph (max 45-50 mph) on Tuesday. Winds pick up after midnight tonight and linger throughout Tuesday. The saturated ground from recent snowmelt and rain may make trees more vulnerable to damage. Power outages are a real possibility, especially along the coast.

Something to remember: the timing, coverage and strength of the winds depends on the track of our incoming storm. If the storm veers farther north, we would see less wind. If the system swings farther south, there could be more winds. Stick with us as we track the latest for you. 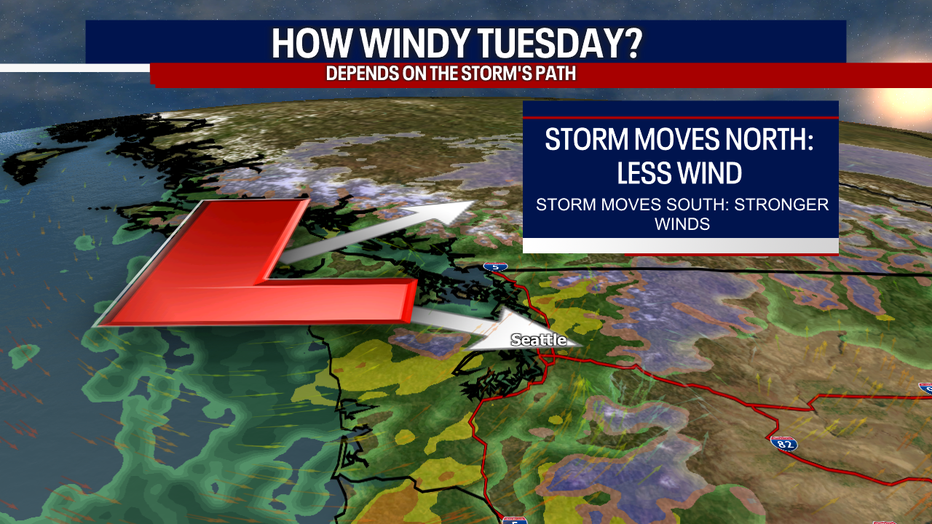 Over the last couple of days, heavy rain is putting pressure on our soil and making it more susceptible to landslides. Everyone in the yellow in the map below is facing a risk for landslides this week. Another few inches of rain across Western Washington the next couple of days will heighten that risk. 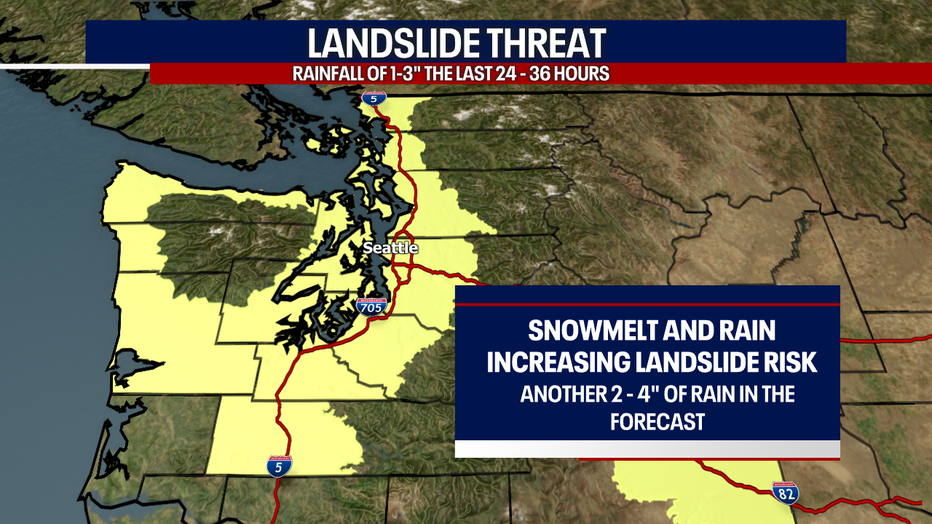 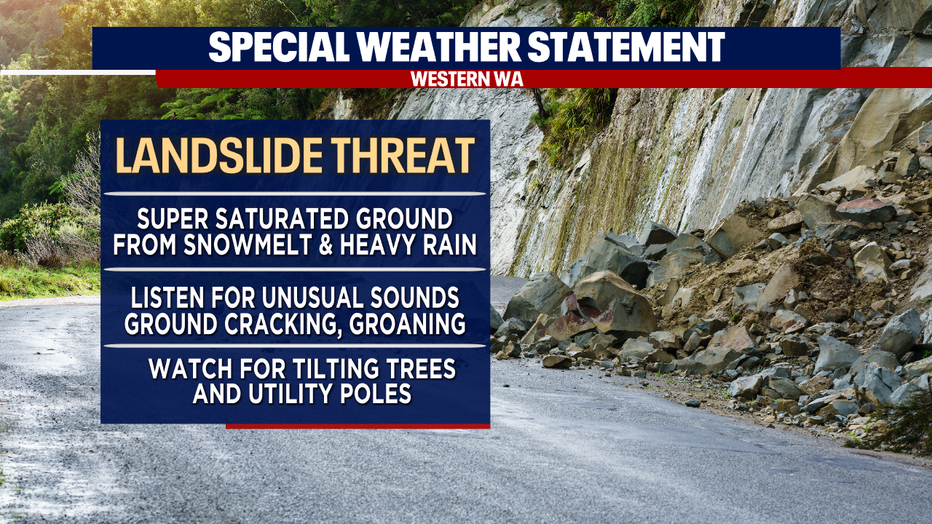 In the light green color below, a Flood Watch is in effect until Wednesday morning. Around the region, we'll have to watch for rising rivers, creeks and streams. Where heavy downpours develop and storm drains get clogged, there may be minor and isolated street flooding in urban areas. 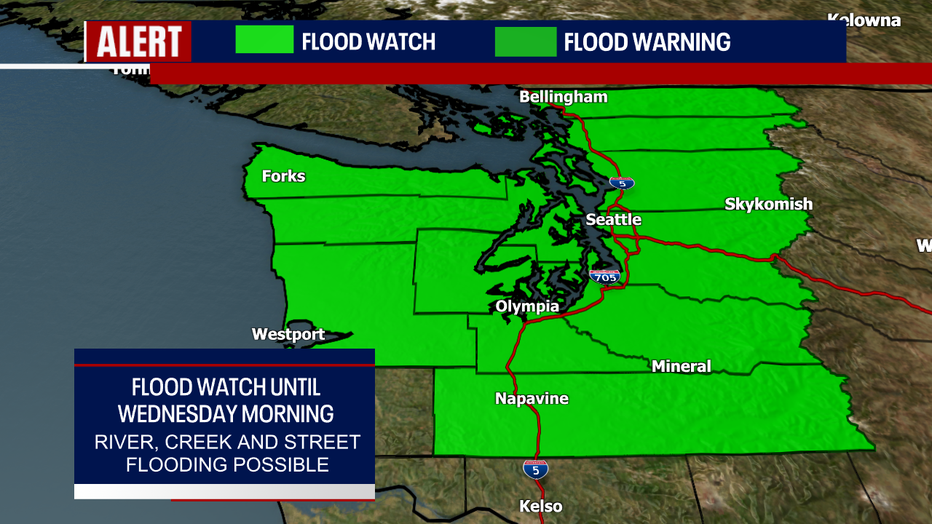 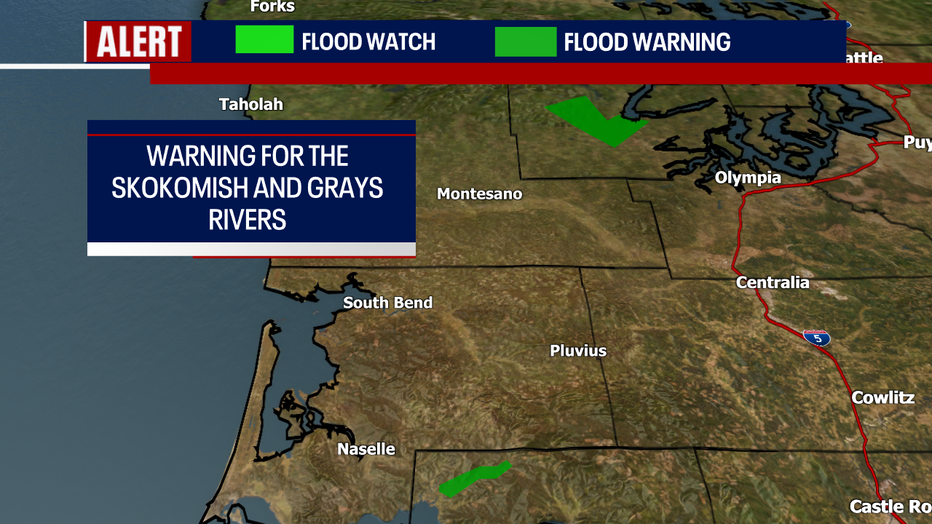 Here's a look at the timing of the soggy weather: 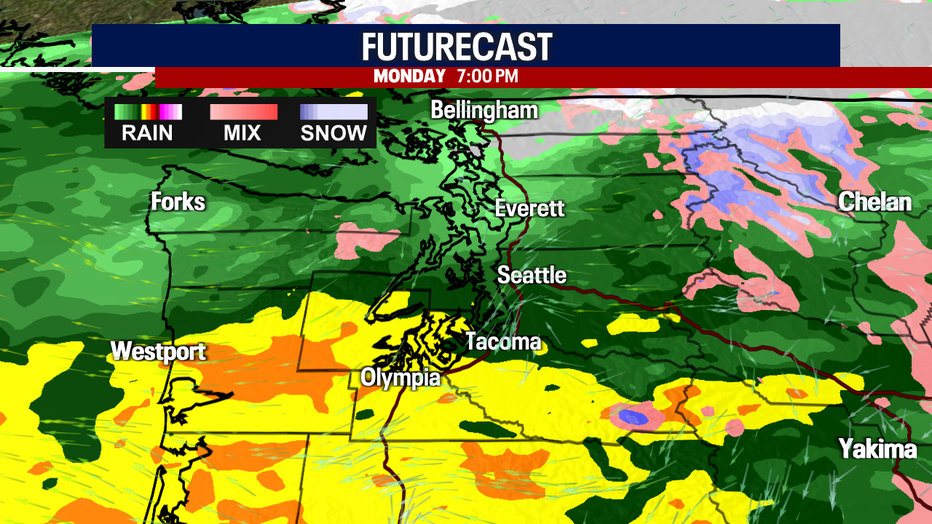 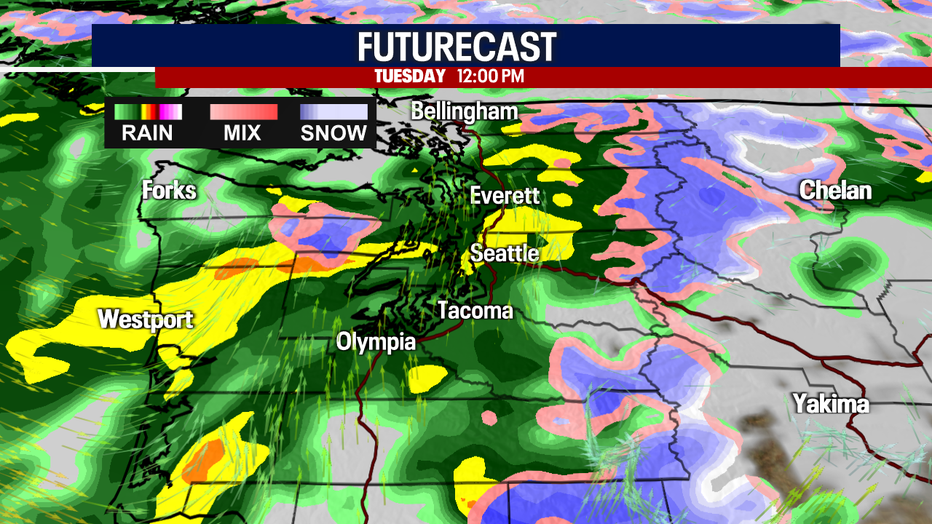 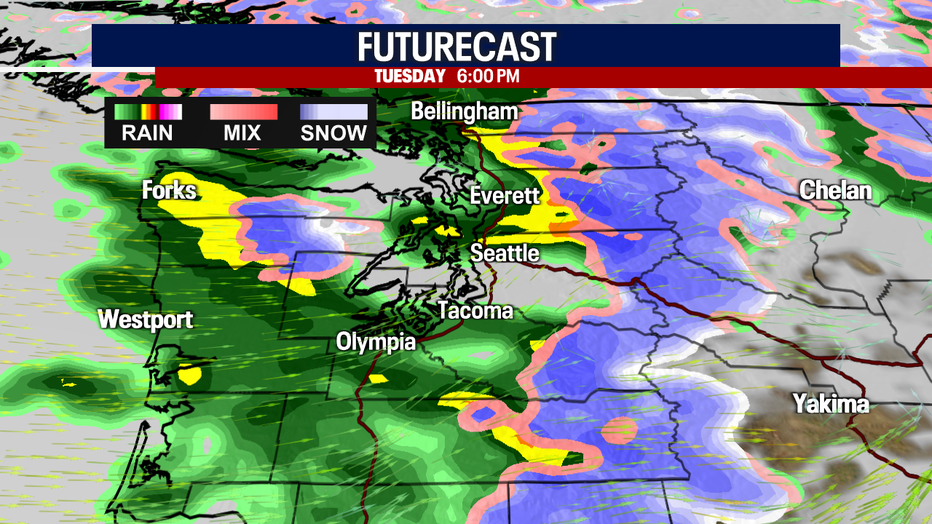 Let's talk about the mountains. Earlier this morning, there was a risk for freezing rain over Stevens and Snoqualmie Passes. As of 11 a.m., Stevens Pass remains closed. The chance for freezing rain over the passes is dropping as the day goes on. If your plans take you over the mountains this afternoon, you'll encounter a lot of rain there. Unfortunately, weather gets worse east of the passes. The Yakima Valley is facing an Ice Storm Warning until early Tuesday. I'd avoid traveling in that area because ice accumulations could be super dangerous. Freezing rain is possible in other places across Eastern Washington today, too.

Heavy mountain snow will ramp up late Tuesday into Wednesday morning. Thursday looks cloudy and showery, but not as wet as what we're forecasting Tuesday. Heavier snow could ramp up Friday, giving way to tough traveling conditions leading up to the holiday weekend.

Tough to believe 2023 is right around the corner! Only isolated showers are expected Saturday into New Year's Day.

Stay with us as we track the rain and wind tomorrow! 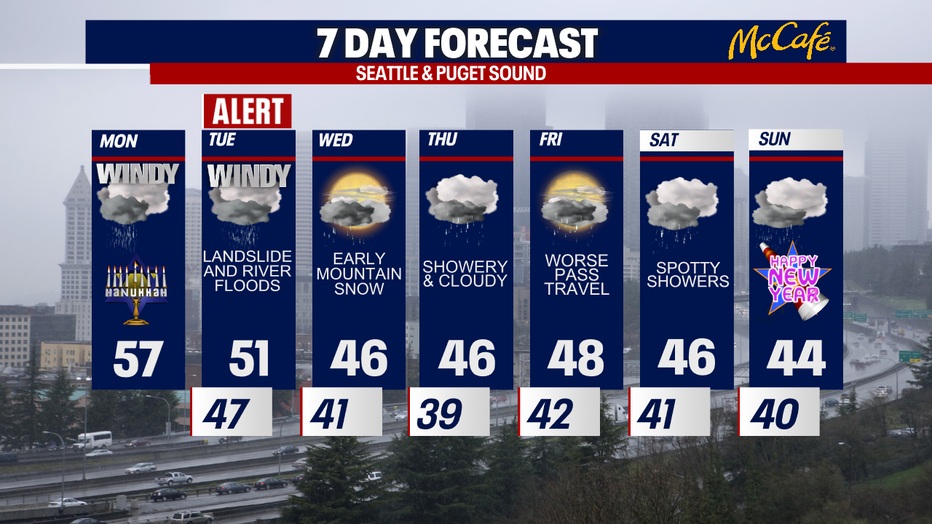