Mild fall weather as we turn the clocks back

seattle - The next weather maker is on the way now!  Late tonight into the early morning hours of Friday we'll see a pretty good punch of rain and gusty winds.

The good news is that this system will move through pretty fast.  As the front approaches showers will first hit the the coast, through the Strait and the North Sound and then fall southeast into Puget Sound.  We expect widespread showers by 5am with winds gusting behind about 20-35mph out of the SW. 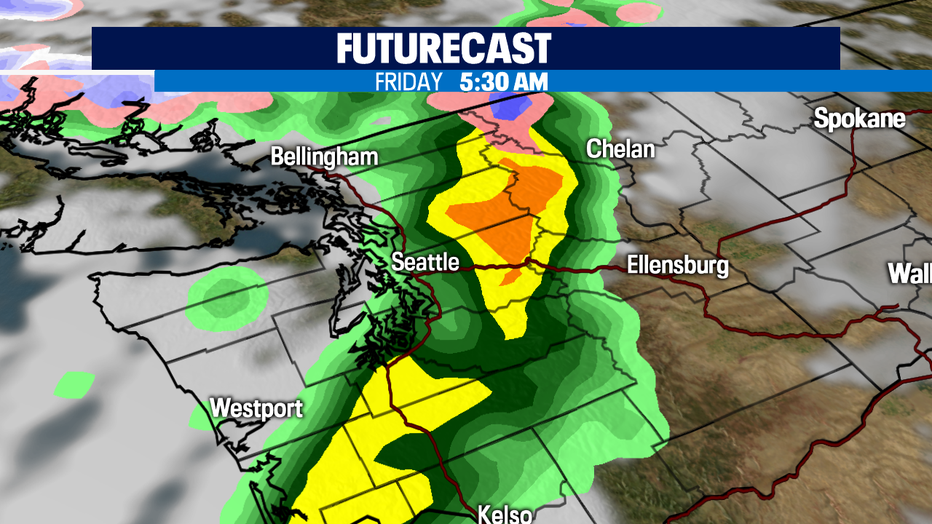 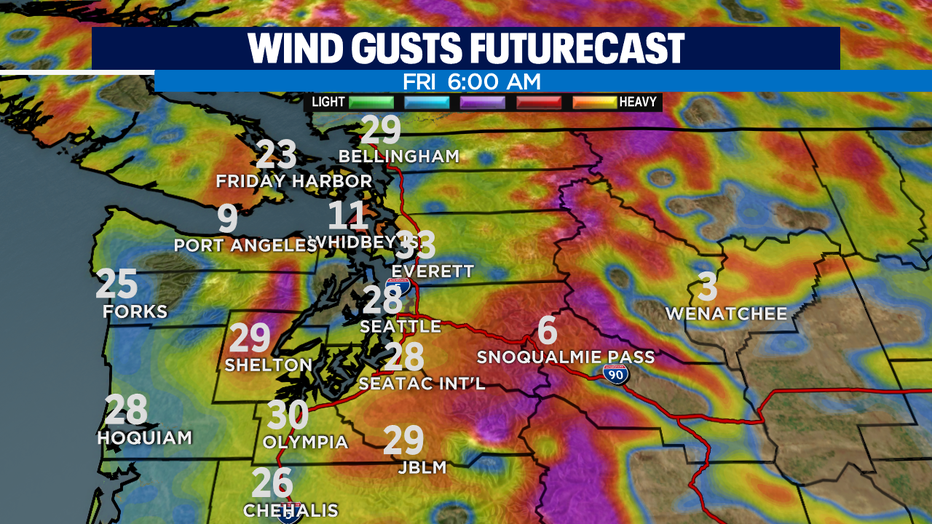 By lunchtime Friday look for clouds to break apart for a nice end to the day.  Highs will sit near 56, just slightly above average for this time of year.  Overnights will drop off into the low 40s.

Okay to our Halloween forecast! Trick-or-Treaters will have dry conditions this year as they socially distance around their neighborhoods.  We'll start the day under mostly cloudy skies along with some patchy morning fog in spots, then by midday clearing will happen for a partly cloudy afternoon with highs in the mid 50s.  Temperatures will drop from the mid 50s during the day to the low 40s overnight. It will be a bit chilly with winds out of the north between 5-10mph. 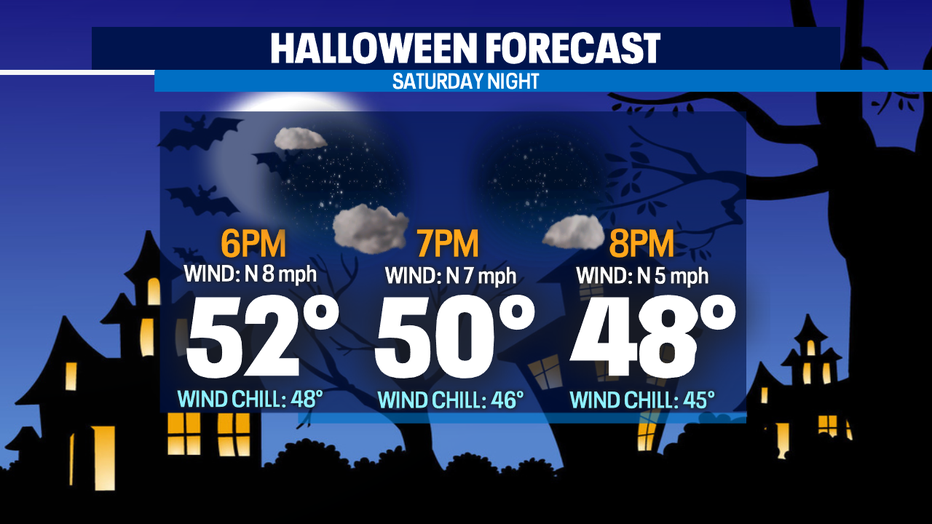 And don't forget to look up to the skies for the Full Blue Hunter Moon on Halloween night.  The moon will rise in the late afternoon. It'll be pretty cool looking on Sunday night too.  Just as the moon sets around 2:25am early Sunday our clocks will have just fallen back for "Daylight Saving" time. 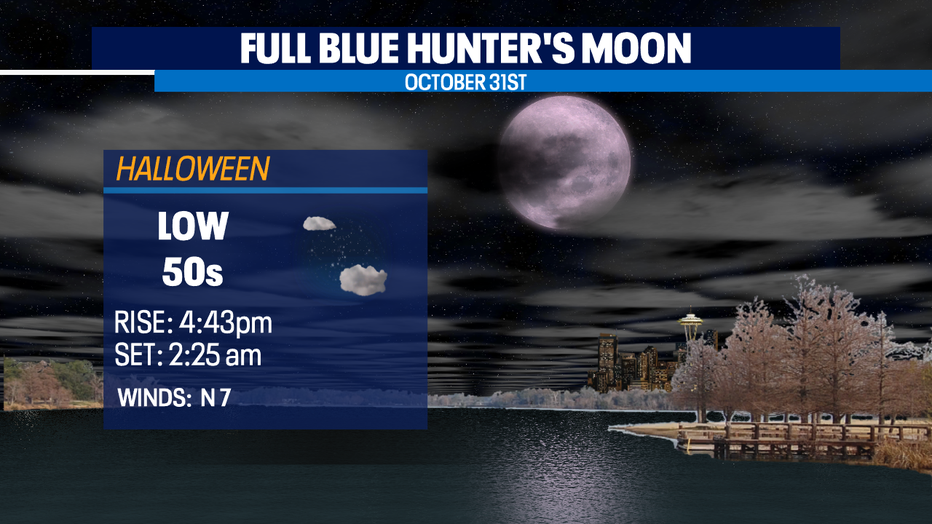 We expect Sunday to be a pretty nice autumn day as well. We will be chilly and for some areas patchy morning fog develops, but the afternoons will showcase some nice Fall sunshine.  Be sure to check out the Seahawks as they host their big rival... the SF 49ers.  Kick off set for 1:25pm at CenturyLink Field.  Temps will hang in the mid to low 50s. 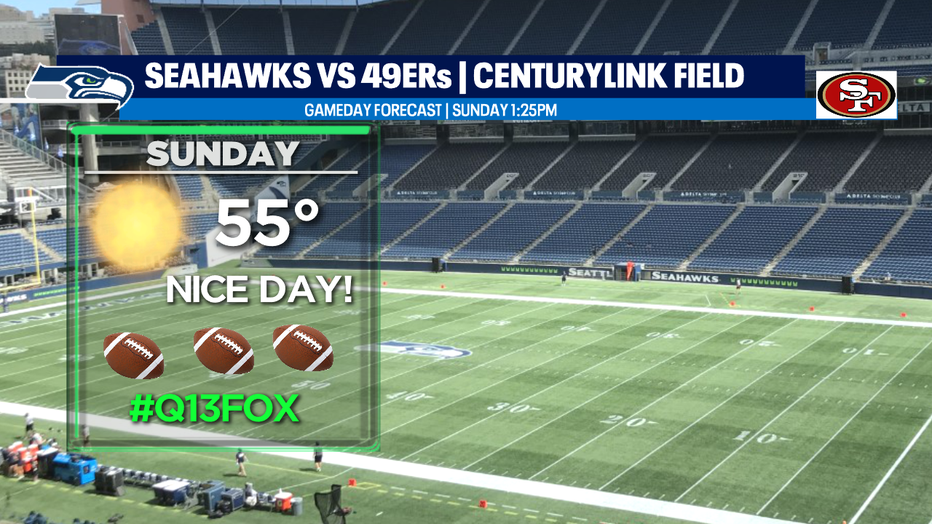 The work week starts out dry with warmer than normal temps under mostly sunny conditions.  Highs will push close to 60! Again, that's about five degrees above average.  But all good things come to an end...  by late Monday night a decently organized system moves inland delivering wet and breezy weather.  Highs will remain warmer along with overnights too.

Following Tuesday's disturbance comes a bit stronger system for Wednesday with another one lined up for Thursday.  Highs will hang in the mid 50s. 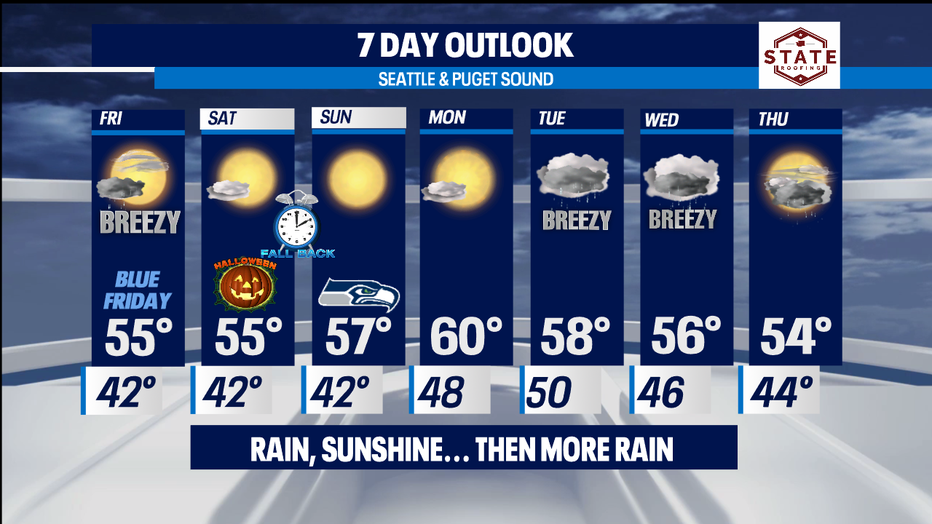