We'll continue to see rain for most of the week.

SEATTLE - A cool day across Western WA with varying skies, from cloudy to clear and even a rainbow! Highs Wednesday around the Seattle area landed in the mid 40s. 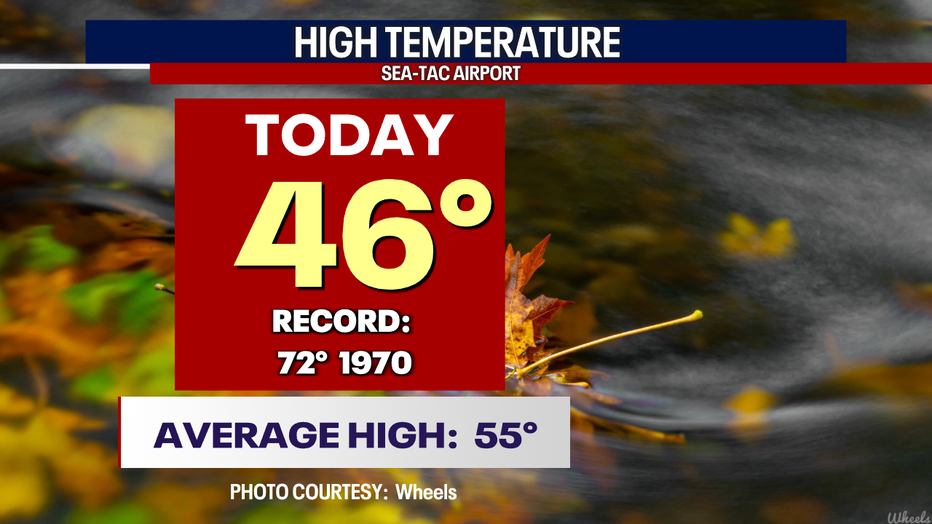 We cool off well below average overnight with temperatures bottoming out in the mid-30s for the metro with even colder lows to the southwest.

Watch out for patchy frost as you get out the door early tomorrow.

Cool to down right cold lows will hang with us through next week when a very chilly air mass takes over the region. 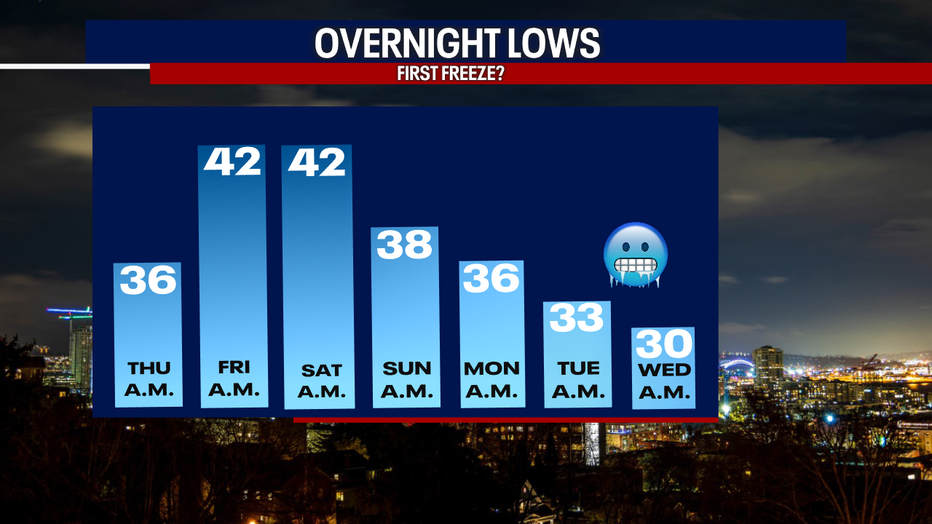 For now, we're focusing on the first big storm hitting the Northwest Thursday afternoon.  And by now you're probably used to the term "Atmospheric River"!

We have our first major one of fall ready to slam into Western WA delivering heavy rain, gusty winds, and mountain snow. 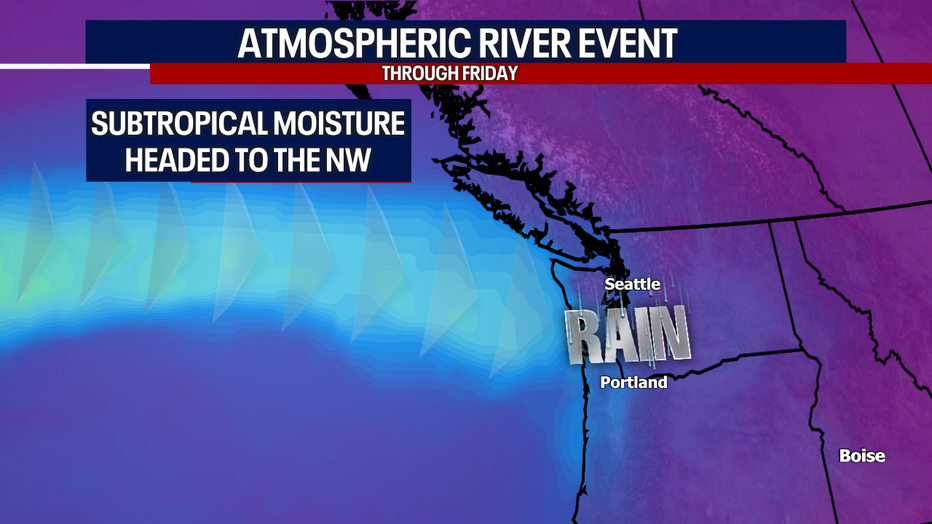 Here's a look at 3 p.m. Thursday as this powerful system sends subtropical moisture into the region. 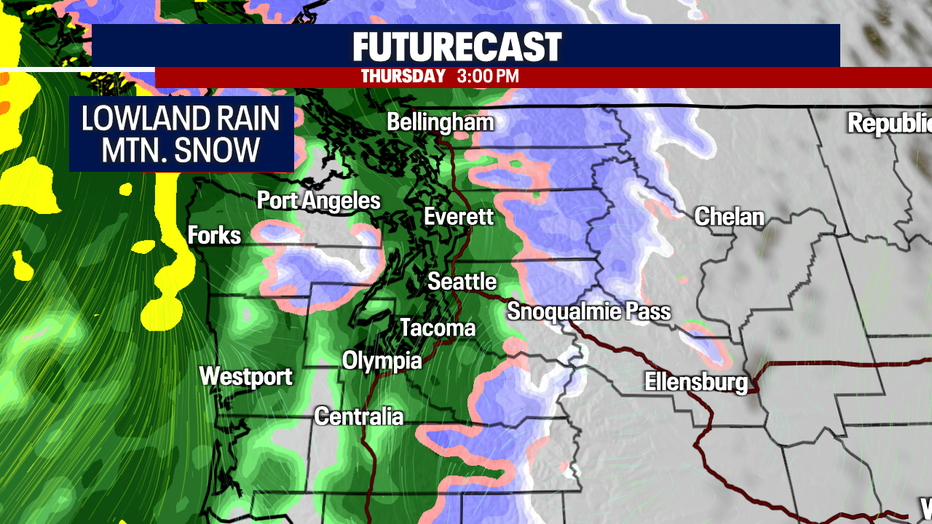 Highs Thursday top out in the mid-40s for most with slightly warmer highs at the beach.  Winds are breezy to windy by late Thursday night. 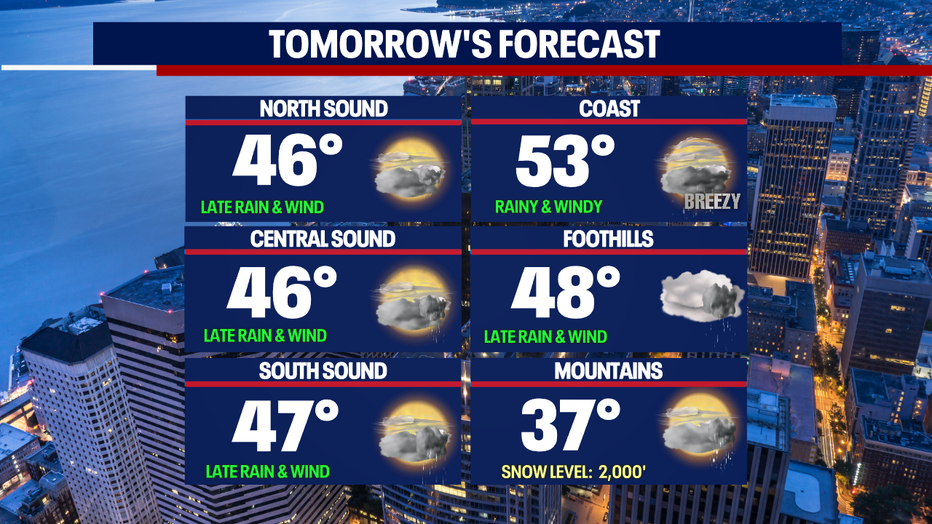 With so much rain falling out of the sky area rivers will become stressed and start to rapidly rise.  A "Flood Watch" goes into effect Thursday lasting through late Saturday forKing, Snohomish and Mason Counties. 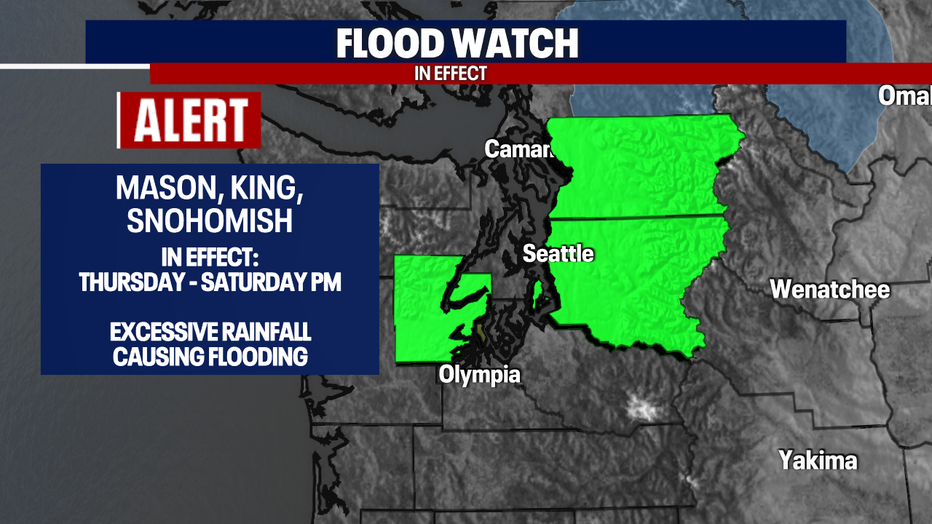 With the excessive amount of rain, our hydrologic outlook has most counties watching for overflowing streams and creeks along with ponding on the roadways.  Allow for extra time when driving over the next few days. 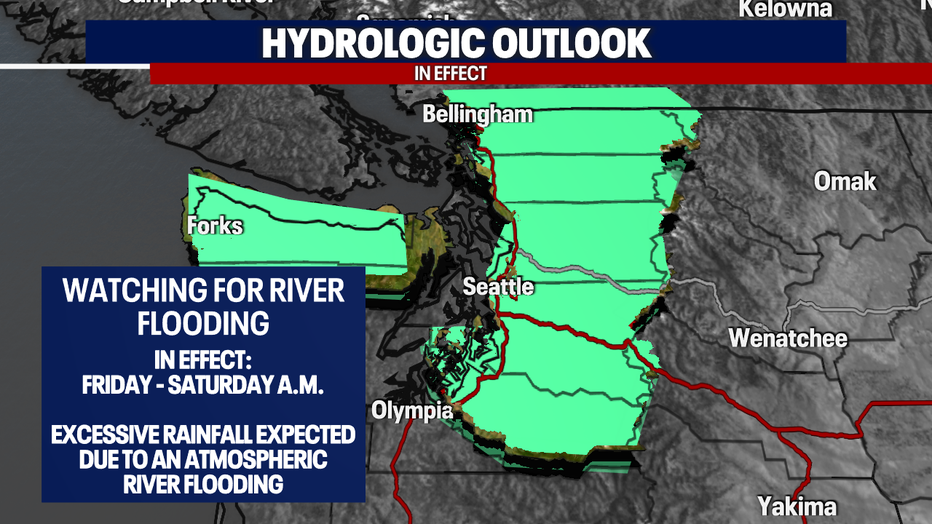 While the lowlands see rain Thursday, snow will start to pile up across the mountains prompting a "Winter Storm Watch" through the Cascades of Skagit and Whatcom Counties.

This alert will last through Saturday morning with snow totals jumping up to several feet near Baker with fewer amounts to the south.

Thursday snow levels sit near 2,000ft, which is below pass level.  So if you have to travel through the mountains, please know the roads before you go! 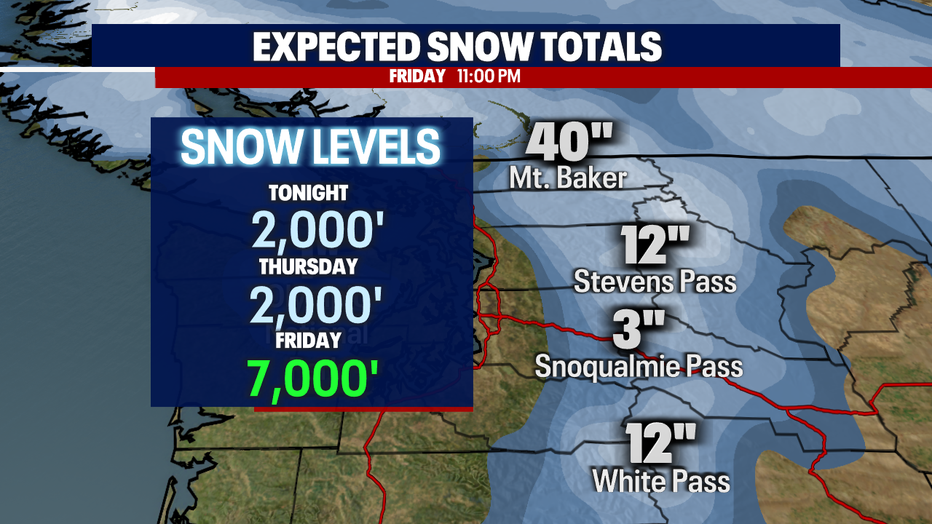 And if heavy rain and mountain snow weren't enough over the Cascades….let's add in some winds too!  We expect gusts up to 50 mph through areas of Skagit and Whatcom Counties. 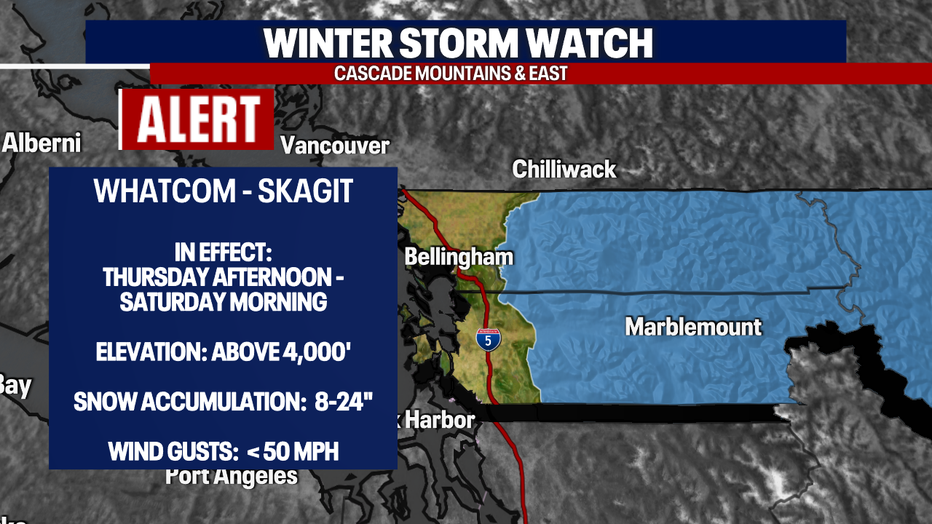 And check out the winds for the lowlands Friday when we see peak gusts close to 40 mph. These wind speeds may cause downed tree limbs or trees along with some power outages. 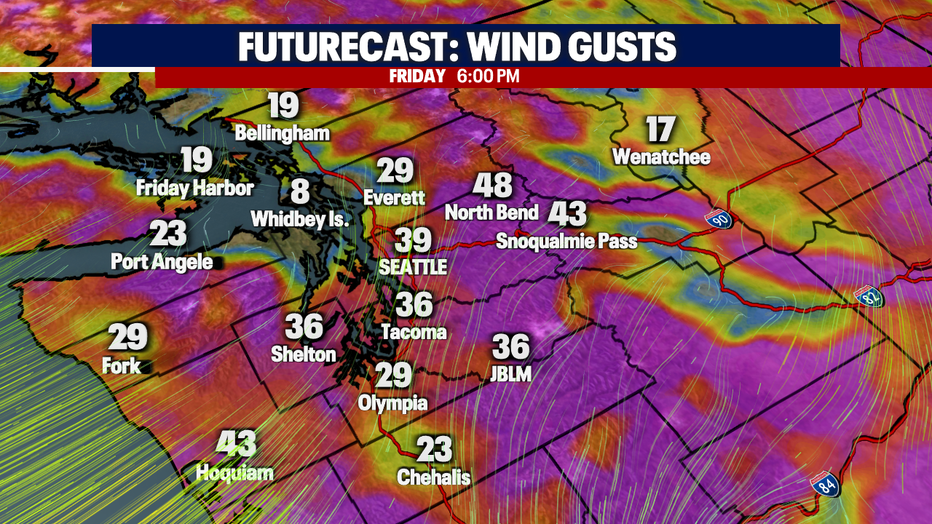 We do calm down some by later Saturday. Rain decreases to showers and windy conditions turn to just breezy through Puget Sound.

By late Saturday into early Sunday, snow levels drop again, so snow over the passes is very likely during this time.

Sunday features more rain as another quick-moving system finds its way into the area. Highs remain cool in the mid 40s.

Next week is a tricky forecast at this point. We are watching a cold air-mass move into the region that potentially will drop highs to near our normal lows for this time of year…very chilly for sure! We're not seeing a ton of moisture with this pattern yet…. We're still several days out, but at this point we just might see snow levels falling between 500-1,000 ft.

Stay tuned!  Have a great rest of the week!  ~Erin Mayovsky, FOX 13 Forecaster 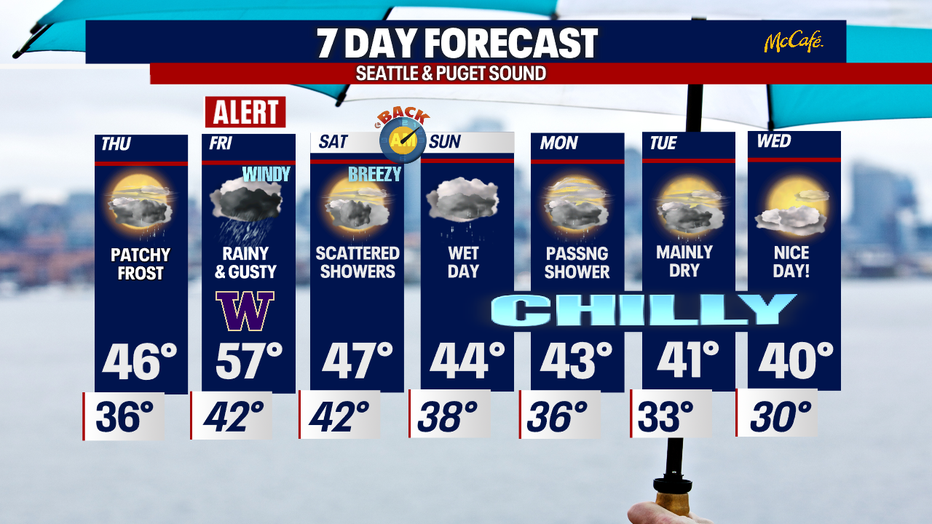