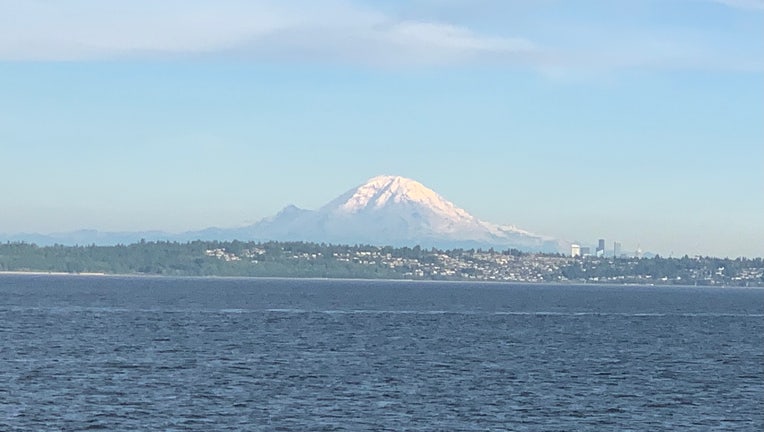 SEATTLE - A budding heat wave across the West is expected to expand into the Pacific Northwest this weekend, reaching levels that could bring temperatures in some areas threatening all-time records, not just for the day or for June, but any day.

Current computer forecast charts predict a massive ridge of high pressure building into B.C. and the Northwest later this week that will begin cooking the atmosphere.

Temperatures will remain comfortable through the week but begin rapidly warming toward the end of the week, reaching the mid 80s by Friday. The intense heat arrives Saturday and lasts into at least Monday with highs in the Seattle area well into the 90s --- with reaching 100 or more at least in the realm of possible for those away from the water.

Seattle's all-time hottest June day on record is 96 at Sea-Tac Airport, done three times; most recently in 2017. But the record is 100 degrees on June 9, 1955 if you count in the Downtown Federal Building data.

Seattle's ALL-TIME hottest day is 103 degrees set on July 29, 2009 and there are at least a few forecast charts that think even those levels are reachable, if not beatable, especially Sunday. But there is still some uncertainty in exactly how hot it will get in the Seattle area and spots near Puget Sound. Offshore winds may not be strong enough to allow some localized sea breezes to keep areas near the inland and ocean waters cooler in the afternoon and evening. There is high confidence we should at least reach 90 degrees but these super hot temperatures still have some caveats.

But whether it's 92 or 99 it'll be a hot weekend for sure, so be sure to prepare now for scorching days and very warm nights.

Get away from the water and there is higher confidence of getting some rather lofty temperatures. Highs in Southwestern Washington and in the Cascade foothills look to surpass 100 with going over 105 a possibility on Sunday and perhaps Monday.

The brunt of the heat looks to settle in Eastern Washington where triple digits will be easily reached and many places could even surpass 110 degrees, especially in the Columbia Basin. The forecasted high of 112 on Monday in the Tri-Cities would tie their all-time record but some forecast charts suggest even 115 or more is possible.

In fact, the entire state's all-time heat record is 118 degrees set at ironically-named Ice Harbor Dam on Aug. 5, 1961 and at Wahluke on July 24, 1929, according to the Office of the Washington State Climatologist, and some charts think that could be within reach. https://climate.washington.edu/state-records/

Where to avoid the heat?

If you're looking to run from the heat, you can try the usual suspects to at least knock down Nature's thermostat a few pegs. Models suggest heading north of Seattle may at least get you down into the 80s to low 90s, especially near water. The coast and northern Olympic Peninsula will also be baking by their standards but should stay in the 80s as well with lack of a strong offshore flow. Just note that as rare as air conditioning is in the Seattle area, it's even harder to find out there.

When will it end?

It looks like we'll start to cool off on Tuesday but remain above normal through the week.