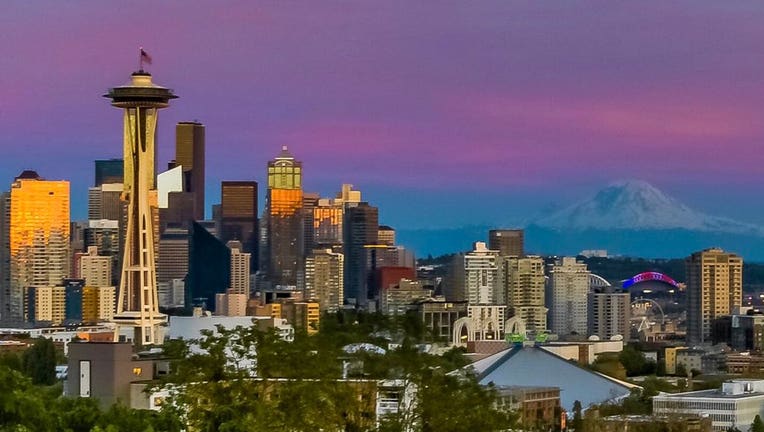 The skies over Seattle turn shades of pink and purple during sunset on May 31, 2021. (Photo: Emerita L. Wheeling Photography)

But new research from the Office of the Washington State Climatologist suggests maybe the next phase of the scorching hot housing market in the Puget Sound region might just be Terminal A as Sea-Tac Airport just topped a survey indicating it has the most ideal weather climate in the state based on what Washington residents prefer!

(OK, so it's not really Sea-Tac Airport, but Seattle weather in general that scored the best. Just, as Carlin noted, the airport was where the weather stats were taken.)

Recently, California consulting meteorologist Jan Null created what he called the "Camelot Climate Index" where he scored cities across the United States based on what he thought were ideal weather and climate conditions -- mild temperatures, little rain and few extremes.

But Washingtonians are cut from a different cloth, and the state climatology folks wondered what would we think is an ideal climate? Don't we like the rain more and want the heat a little less? Maybe? And then once armed with that information, let's create our own index showcasing which spots in Washington are the best places to live to find that climate.

First up: What's our ideal climate?

Actually, first up: What do we call this index?

State Climatologist Nick Bond and his team created the survey which asked questions about what would be your ideal climate, like best average summer high temperatures? How many rainy days a year? How much snow do you want in a year? Next, they asked to rank those weather categories in order of importance. Finally they asked: What should we name the index? 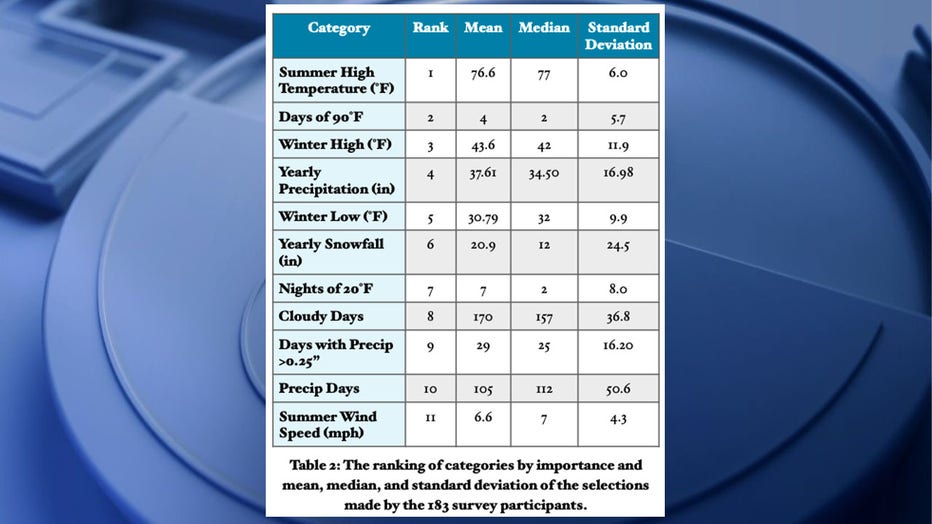 The winning name was the "Goldilocks Index", edging out "Evergreen Index"-- though special shout out goes to the person who came up with the "Calculation of Feelings From Environmental Elements" -- or the COFFEE Index. And a hug goes out to the person who submitted "Sucks most gloomy depressing place on Earth." We'll get back to you on that slogan for the Washington Tourism ads…

But we're sure of more interest were the ideal climate conditions. Their most important factor in determining ideal climate? Summer temperatures. The average came in right around 76-77 degrees, and that's about right where Seattle's average summer highs are. (Spoiler Alert!) 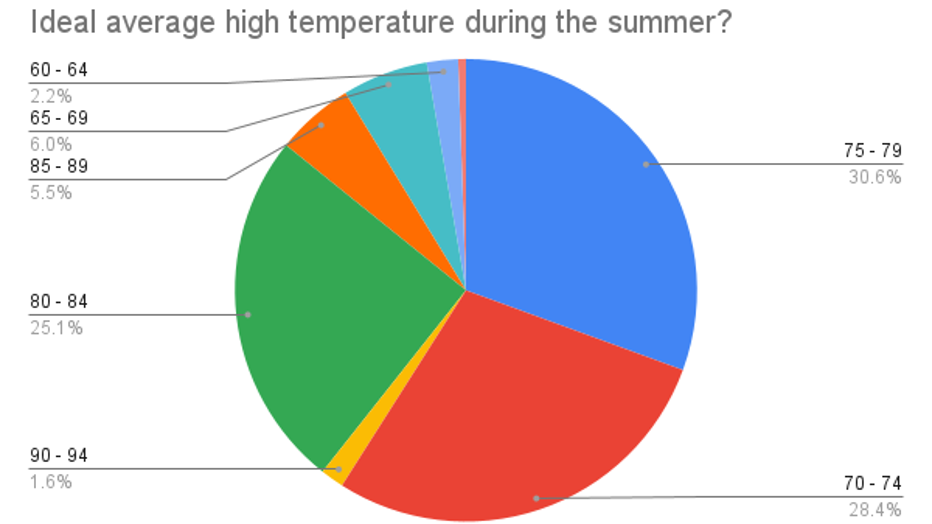 Next most important was the number of 90+ degree days. The average request was 4 days with a median of 2. Seattle's average? 3. Hmmm… Anyone else spotting a trend? 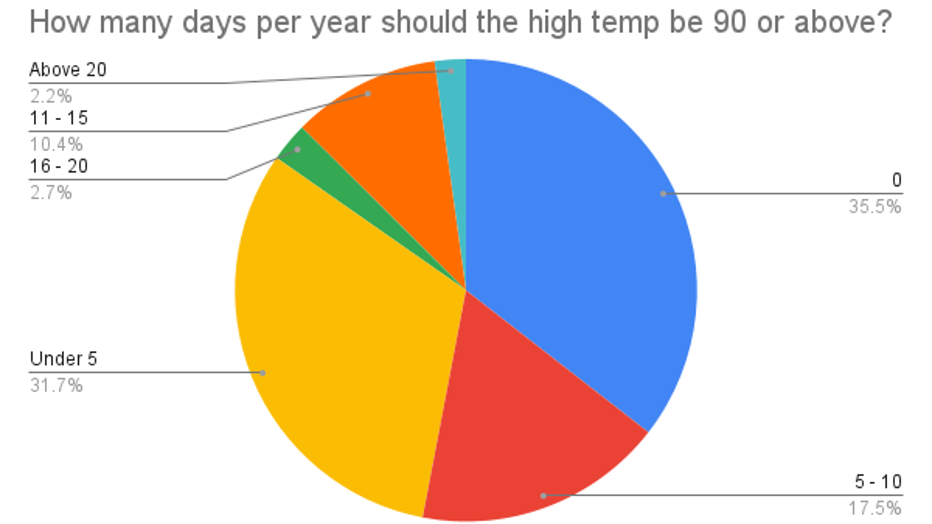 Third up: Winter high temps -- a very wide range here from 50s to 30s. It averaged out to about 42-43 degrees which seems to satisfy neither camp -- too warm for snow; too cold to be comfortable. But it is again right about Seattle's average high. 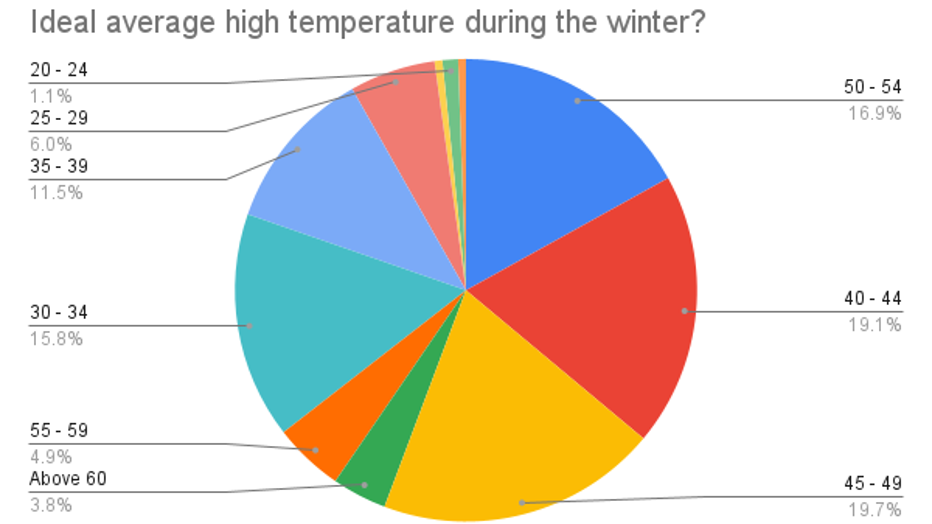 The amount of rain per year ranked 4th and yearly snowfall ranked 6th, with a wide range of snow requests from never to a gazillion. 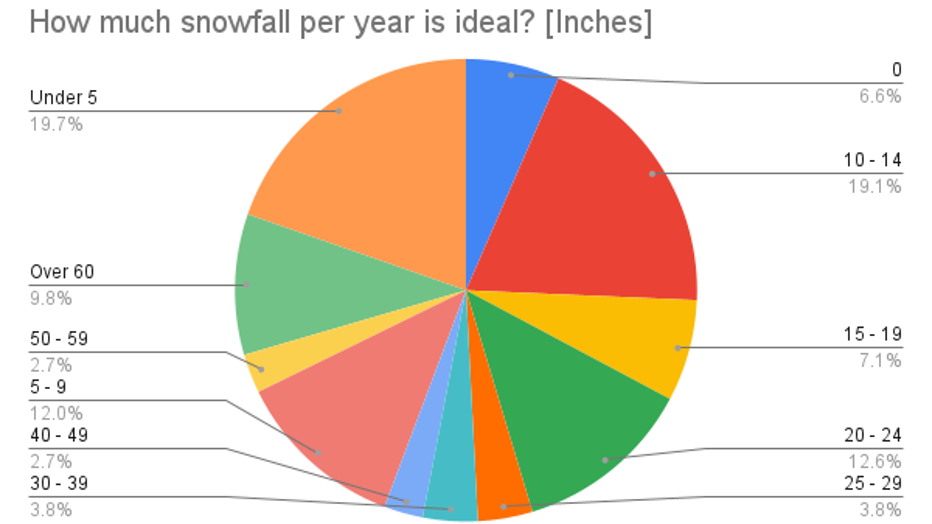 Bond thinks there is a limit though.

But here's an interesting facet: The number cloudy and rainy days -- be it drizzly days or heavy rain days -- was not an important factor, so says the survey participants, ranking in the bottom of importance. 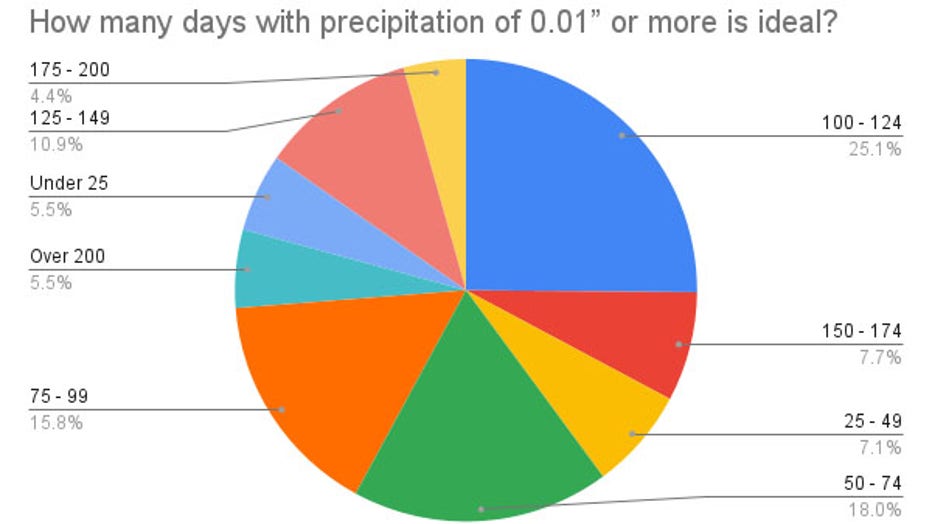 "That result is unexpected," writes Bond. "Certainly, there is plenty of grousing by the general public during stretches of wet weather that can prevail on the west side of the Cascades. On the other hand, perhaps the people that filled out our survey are cut from a different cloth."

I think we said that already.

Though we should point out the survey folks did say they'd want far fewer rainy and cloudy days than the west side of the state has to offer. 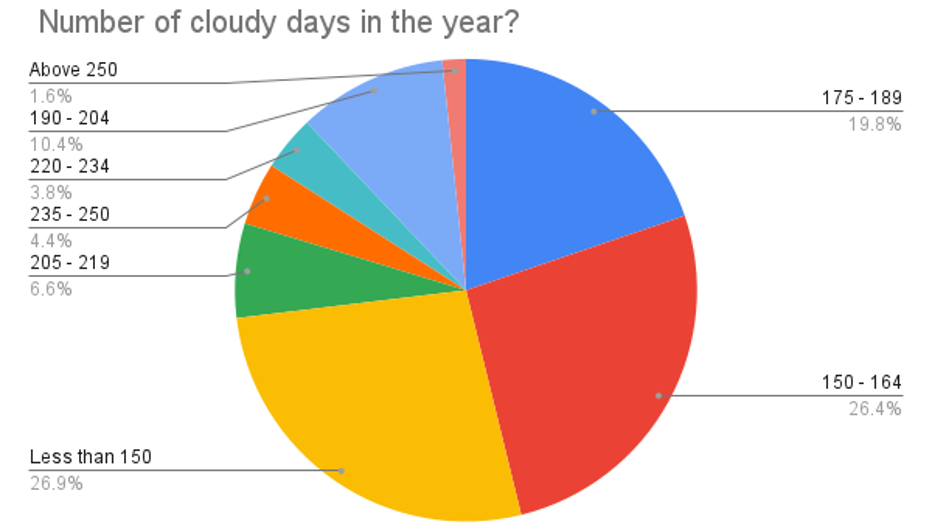 Average number of cloudy days requested was about 170 with 105 rainy days. Seattle checks in over 200 cloudy days with 150 or so rainy days, though again, there was a wide range of requests (probably skewed a bit by my request of 353 days - hey, you still get one dry day a month, sun fans!). It was also skewed by the fact that only 10 people chimed in from Eastern Washington. (Hey, E-WA! You should read the state climate newsletter!)

Bond and his team took all those responses and scored them based on their rated importance to match up where our favorite climate exists. The lower the score, the more the town matched with the more ideal climate (so think golf scores, instead of bowling, they say...)

And atop the list, to the surprise of no one who has been paying attention in this blog, was….

(Well, technically Sea-Tac Airport, where the data is taken for Seattle. But hey Burien and SeaTac, this is your big promotion chance! Renton might be "Ahead of the Curve", but you have the best-rated weather in Washington!) 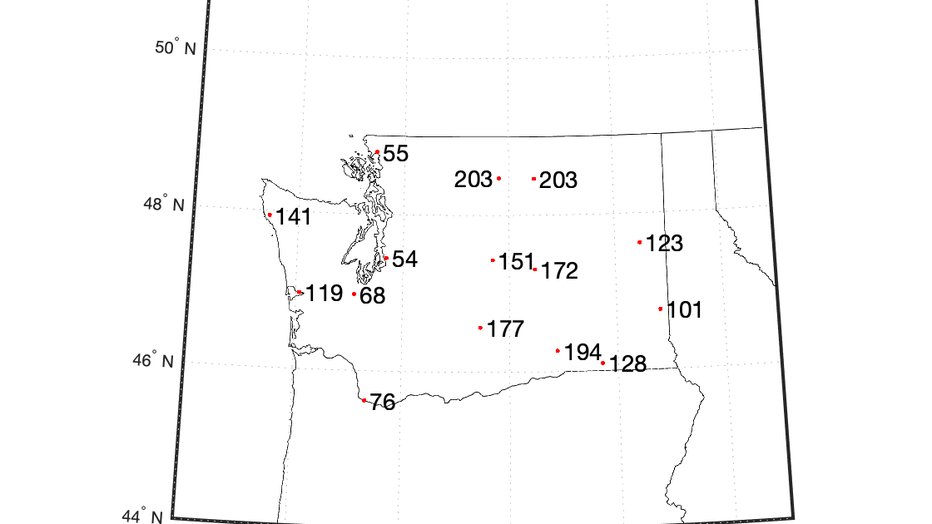 If the roar of Boeing jets every few seconds is not your tea, you can head north to Bellingham which came in a very close second. It's quieter and in more normal times has friendly Canadians who say hello as they come to buy milk and gas. Olympia and Vancouver (the Washington version) came in a fairly close third and fourth. After that, there's a large drop off going east (too hot and dry) or west (too cool and wet) from there. New I-5 Slogan: At least when you're stuck in jammed traffic and never-ending construction projects, you can roll your windows down.

Bond was more surprised the coastal locations of Forks and Hoquiam fared as well as they did, coming in a respectable middle of the pack.

"One cannot help but wonder if transplanted to the coast, how well most individuals would cope with its frequent deluges," Bond said. Oh, we survive, says this coastal native. 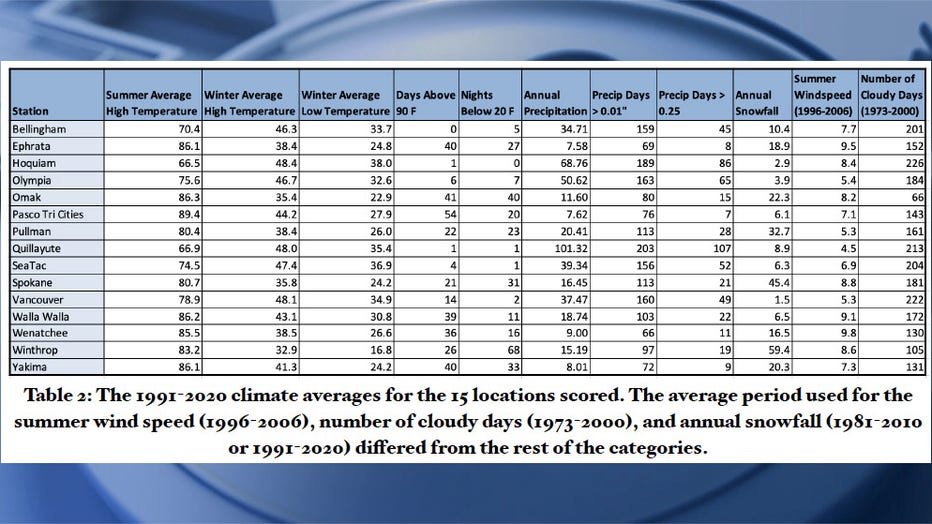 On the other hand, Eastern Washington scored poorly just about across the board with the Winthrop area hammered by hot summers and cold/snowy winters.

"Due to the outsized influence of this newsletter, the residents of the Methow Valley may be looking at a nosedive in property values," Bond quipped. Scores across the Central Basin weren't much better.

Pullman was the "winner" which Bond says, "somebody knew what they were doing in locating WSU," though he noted "the relative ranking of the climate of the Seattle area and Pullman mirrors their schools' records in the Apple Cup." (Hmm, he's right!)

But maybe most people live where they do because they like the weather already?

"A spot check of individual survey entries from east of the Cascades reveals a taste for warmer summers, colder winters and lesser precipitation relative to those for the entrants as a whole," Bond said. "So again, is this a case of people choosing the weather they experience over the weather they actually favor? We can only speculate, of course."

Either way, just don't go looking for housing at the airport. There are far more accessible gated communities.