LAKE CHARLES, La. (AP) - LOS ANGELES - One of the strongest hurricanes ever to strike the U.S. pounded the Gulf Coast with wind and rain early Thursday morning, but Laura rapidly weakened and was downgraded to a tropical depression by Thursday night.

As of 3 p.m. CDT on Friday, Laura was centered near the northeast corner of Arkansas. The storm had sustained winds of 30 mph and was moving east-northeast at 20 mph. Strong winds, flooding rain and tornadoes from the South and mid-Mississippi Valley into the Ohio and Tennessee valleys will still be possible with the system.

The Weather Prediction Center issued advisories on Laura as it still posed a flooding threat for the Tennessee Valley down to the Central Gulf Coast.

“In some areas where surge penetrated far inland, flood waters will not fully recede for several days,” NOAA reported.

The threat of heavy rainfall will persist as the system moves northeast toward the Mid-Atlantic states and East Coast.

Hurricane Laura roared ashore in Louisiana near the Texas border around 1 a.m. CDT Thursday, unleashing a fearsome wall of seawater.

The drone handled itself well in 15mph+ winds on the beach. (Credit: Fox News)

Hundreds of thousands of people across Louisiana were still without power or water Friday, a day after Laura sawed a devastating path through the state, killing at least 11 people, and officials warned that basic services could be knocked out for weeks or longer along parts of the Gulf Coast.

The death toll rose after authorities reported that a Texas man was killed when the Category 4 hurricane sent a tree crashing into his home near the Louisiana border. Four other people, all in the same residence, died from carbon monoxide poisoning from a generator. Six deaths were reported Thursday in Louisiana, where the outlook was grim for thousands of evacuated residents eager to return.

“We need help,” said Lawrence “Lee” Faulk, 57, who returned to a home with no roof in hard-hit Cameron Parish, which was littered with downed power lines. “We need ice, water, blue tarps — everything that you would associate with the storm, we need it. Like two hours ago.”

In Lake Charles, Mayor Nic Hunter cautioned that there was no timetable for restoring electricity and that water-treatment plants “took a beating,” resulting in barely a trickle of water coming out of most faucets in the city of 80,000 people. 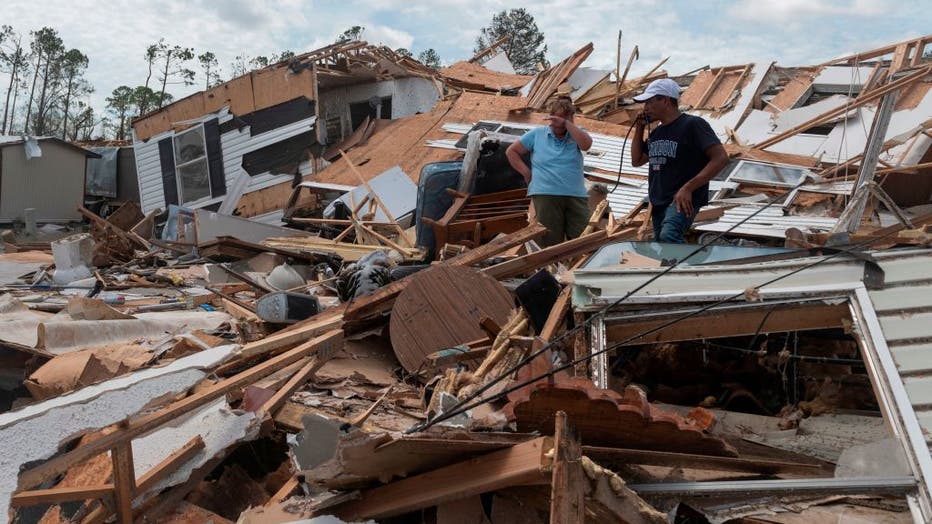 A couple react as they go through their destroyed mobile home following the passing of hurricane Laura in Lake Charles, Louisiana, on August 27, 2020. (Photo by ANDREW CABALLERO-REYNOLDS/AFP via Getty Images)

"If you come back to Lake Charles to stay, make sure you understand the above reality and are prepared to live in it for many days, probably weeks,” Hunter wrote on Facebook.

“'Look and Leave’ truly is the best option for many," he added.

Several hospitals were evacuating critical patients to other facilities because of water and power issues, the state health department said. Other hospitals were operating on intermittent generator power.

Forty nursing homes also relied on generators, and assessments were underway to determine if more than 860 residents in 11 facilities that had been evacuated could return. Water outages remained a major problem in evacuated facilities, the Louisiana Department of Health said.

President Donald Trump planned to visit the Gulf Coast this weekend to tour the damage.

Meanwhile, the hurricane’s remnants threatened to bring flooding and tornadoes to Tennessee as the storm, now a tropical depression, drifted north. Forecasters warned that the system could strengthen into a tropical storm again upon returning to the Atlantic Ocean this weekend.

As the grueling recovery came into focus, short bursts of rain heaped new misery onto homes missing windows and roofs. The prevailing sense of relief that Laura, one of the most powerful hurricanes to strike the U.S., was not as brutal as originally feared offered little comfort to people cleaning up the mess.

In the storm's wake, more than 600,000 homes and businesses were without power in Louisiana, Texas and Arkansas, according to poweroutage.us, which tracks utility reports.

The Louisiana Department of Health estimated that more than 220,000 people were without water. 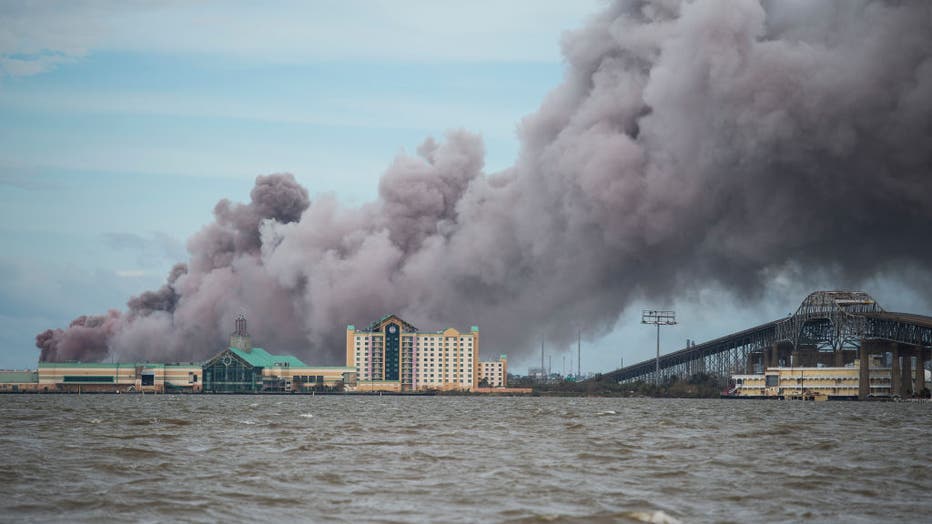 Smoke rises from a burning chemical plant after the passing of Hurricane Laura in Lake Charles, Louisiana on August 27, 2020. (Photo by ANDREW CABALLERO-REYNOLDS/AFP via Getty Images)

“We think there are going to be people who realize relatively quickly that either they can’t stay in their homes or can’t go back to their homes,” said Christina Stephens, a spokeswoman for Louisiana Gov. John Bel Edwards.

Restoration of those services could take weeks or months, and full rebuilding could take years.

In Lake Charles, Ira Lyles returned to find that his downtown salon called The Parlor House survived with little damage, but his home was destroyed.

As Louisiana began cleaning up, Laura's remnants delivered heavy rain and strong winds to Memphis, Tennessee, and knocked out electricity. Flash flood watches were in effect throughout western Tennessee.

Laura's arrival on Thursday inundated entire neighborhoods on or and near the Gulf Coast. In the aftermath, twisted sheets of metal and downed trees and power lines cluttered nearly every street. Caravans of utility trucks were met Friday by thunderstorms in the sizzling heat, complicating recovery efforts.

Rescue crews descend on Louisiana in aftermath of Hurricane Laura

Crews from several states were dispatched to assist in the aftermath of Hurricane Laura along the Louisiana coastline, which battered buildings, flooded streets and left thousands without power.

Edwards called Laura, which packed a top wind speed of 150 mph, the most powerful hurricane to strike Louisiana, meaning it surpassed even Katrina, which was a Category 3 storm when it hit in 2005.

More than 580,000 coastal residents were put under evacuation as the hurricane gained strength in the Gulf of Mexico. Laura was the seventh named storm to strike the U.S. this year, setting a new record for U.S. landfalls by the end of August. Laura hit the U.S. after killing nearly two dozen people in Haiti and the Dominican Republic.

“There’s people without homes," said Stanley Hazelton, who rode out the storm on the bathroom floor of his Lake Charles home, where a tree punctured his roof. “So it was dumb. We’ll never do it again. We’ll never stay through another hurricane again.”