On January 15, 2022, an underwater volcano erupted near the small island of Hunga-Tonga-Hunga-Ha'apai. Not only did it send atmospheric shock waves, sonic booms and tsunami waves all around the world, but scientists say they just found that effects also reached space.

NASA researchers analyzed data and found that hurricane-speed winds and unusual electric currents formed in the ionosphere in the hours after the eruption. 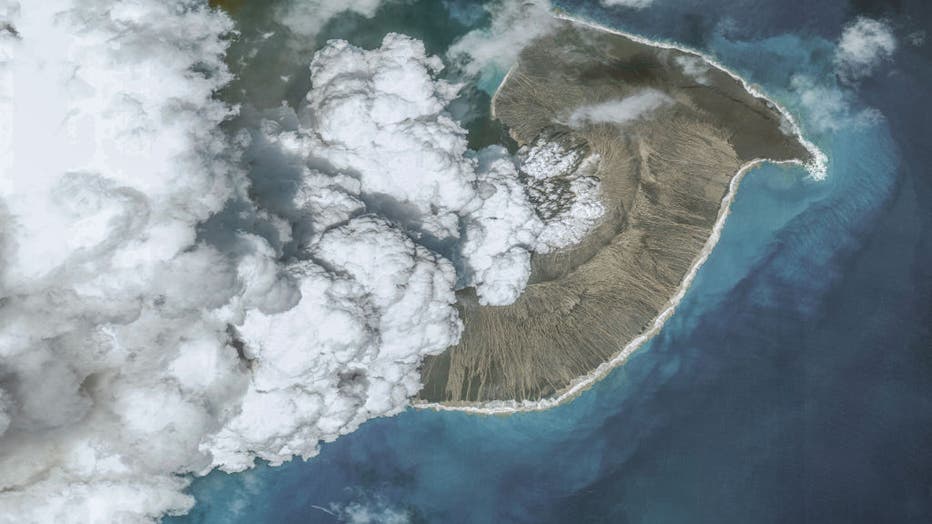 "The volcano created one of the largest disturbances in space we've seen in the modern era," said Brian Harding, a physicist at the University of California, Berkeley. "It is allowing us to test the poorly understood connection between the lower atmosphere and space."

The data from NASA's Ionospheric Connection Explorer, or ICON, mission and ESA's (the European Space Agency) Swarm satellites showed the effects in Earth's electrified upper atmospheric layer at the edge of space. ICON was launched in 2019 with hopes of identifying how Earth's weather interacts with weather from space.

The GOES-17 satellite captured images of an umbrella cloud generated by the underwater eruption of the Hunga Tonga-Hunga Ha’apai volcano on Jan. 15, 2022. Crescent-shaped bow shock waves and numerous lighting strikes are also visible.

NASA says that the eruption created significant pressure disturbances in the atmosphere, leading to strong winds. As the winds expanded upwards into thinner atmospheric layers, they moved faster. Upon reaching the ionosphere and the edge of space, ICON clocked the windspeeds at up to 450 mph – making them the strongest winds below 120 miles altitude measured by the mission since its launch.

"These results are an exciting look at how events on Earth can affect weather in space, in addition to space weather affecting Earth," said Jim Spann, space weather lead for NASA's Heliophysics Division. "Understanding space weather holistically will ultimately help us mitigate its effects on society."

Electric currents were also said to have been affected by the extreme winds. The eruption caused the equatorial electrojet, which is powered by winds in the lower atmosphere, to surge five times its standard peak power and dramatically flip direction for a short time.

"It's very surprising to see the electrojet be greatly reversed by something that happened on Earth's surface," said Joanne Wu, a physicist at University of California, Berkeley. "This is something we've only previously seen with strong geomagnetic storms, which are a form of weather in space caused by particles and radiation from the sun."

The Jan. 14, 2022, eruption of an underwater volcano near Tonga was captured on satellite.