Seattle - The first day of fall is next Wednesday, September 22nd, but today is the last great day of summer with sunny skies and highs in the upper 60s to near 70.  We're starting out clear and chilly with some of us in the 30s this morning.  Here are the temps as of 6 a.m. this morning. 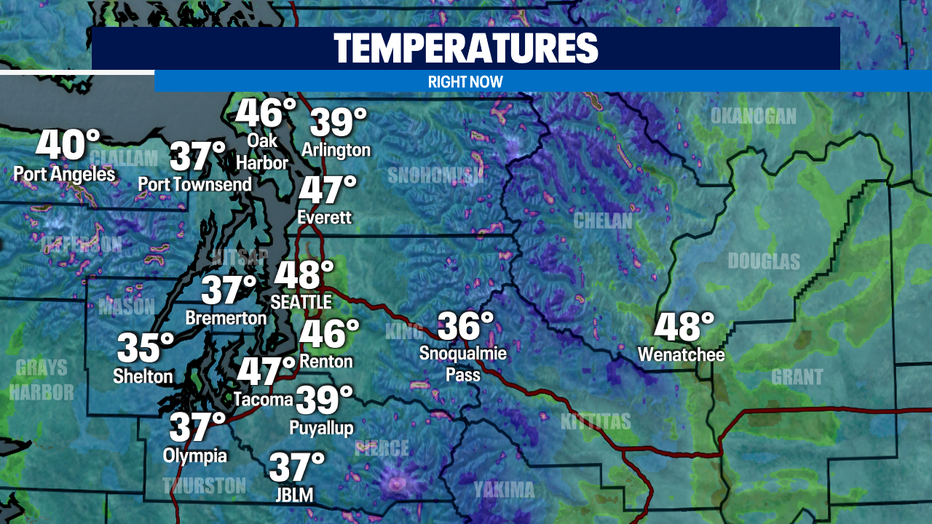 We'll have high clouds late in the day ahead of the system coming tomorrow.  Highs today will be in the mid 60s to around 70.  Normal for this time of the year is 72. 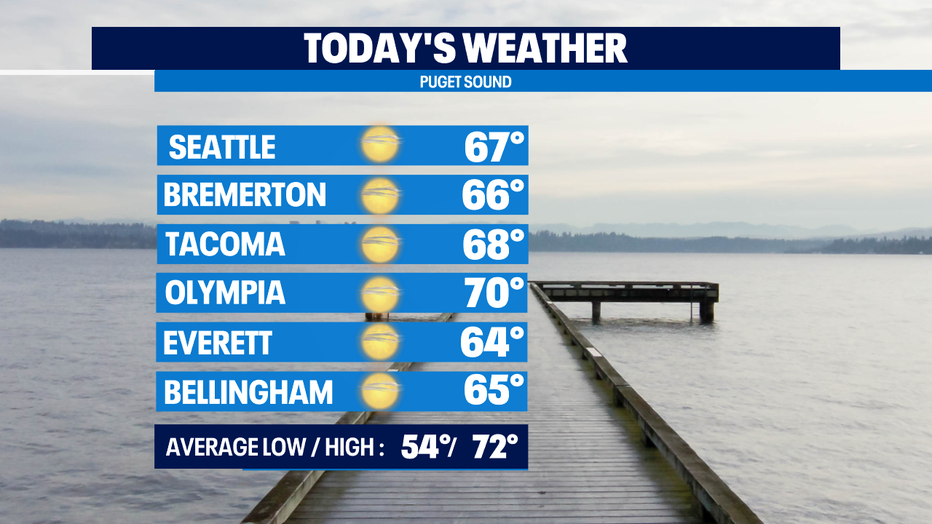 We haven't had significant rainfall since the middle of June.  Tomorrow, get ready for significant rainfall.  I'm calling it our "Summer Ender."  It's also a Weather Alert Day.  Rain starts in during the morning commute and it rains pretty much all day tomorrow.  Expect slick roads, areas of standing water, and potential for urban flooding as drains get clogged.  In fact, if you can clear a drain or your gutters today, do it (safely!).  Here's the FutureCast forecast for 6 a.m. tomorrow morning.  Do you know where your raingear is? 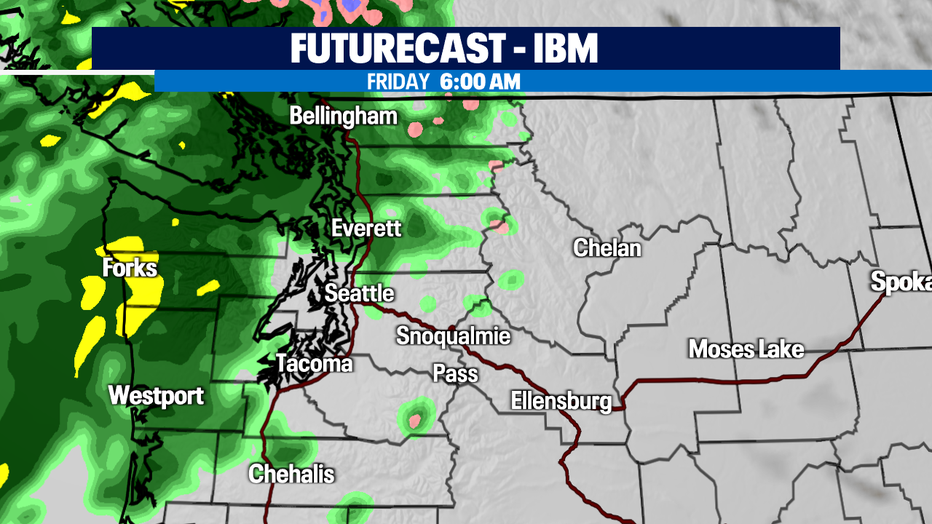 It also gets breezy in the afternoon/evening; windy to the north and on the coast.  The National Weather Service has issued Wind Advisories for the north and the coast.  This time of year, trees still have leaves on them and they act as sails.  Also, it's been so dry that trees are compromised.  As it says on the graphic below, wind could bring down some tree limbs and cause a few power outages.  Highs tomorrow will be in the mid 60s. 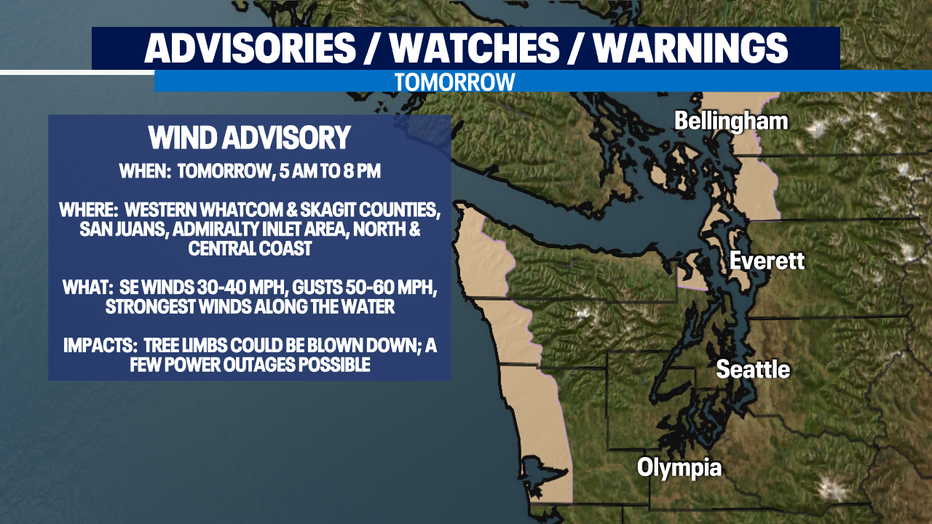 Saturday will feature lots of showers and it's unstable enough that there is the potential for some thunderstorms.  It'll be chilly, topping out only in the low-to-mid 60s.  Football weather for the Dawgs!

Sunday, we'll keep the chance of showers around and there is still a slight chance of a thunderstorm.  It'll be even cooler, with highs only in the low 60s.  Football weather for the Hawks!

Monday and Tuesday look partly sunny with a chance of a few showers.  It'll will be on the chilly side with highs in the mid-to-upper 60s.

Wednesday is the first day of Fall and there is a chance for a few chilly showers. 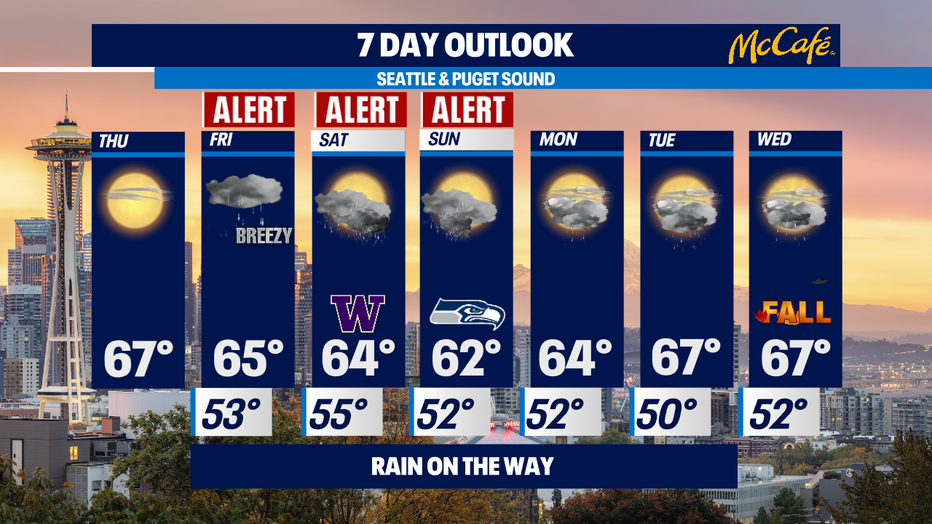 With mostly sunny skies today and highs in the upper 60s, it's a Waggin' Tail Day for the Pet Walk Forecast.  Baker is an adorable Bernedoodle puppy!  That's a mix of a Bernese Mountain Dog and a Poodle.  CUTE!  Tomorrow it'll be WET PAWS for sure! 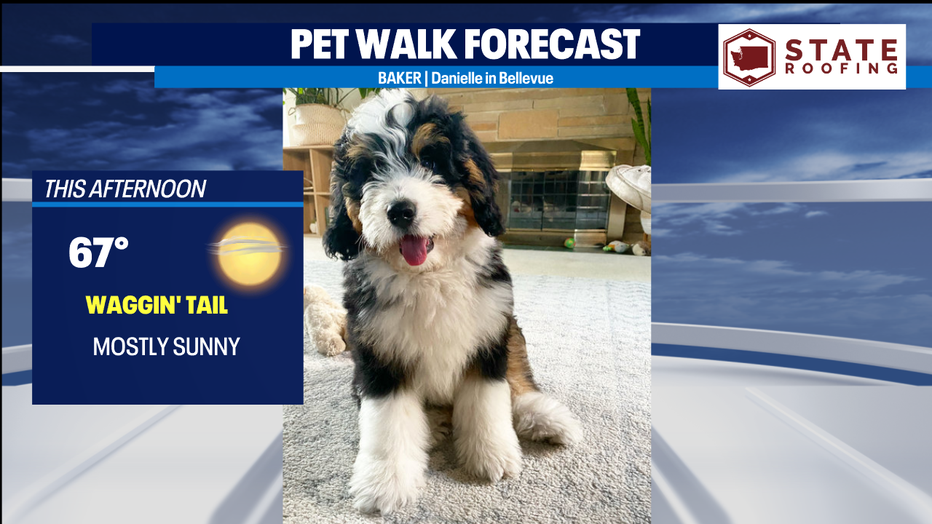