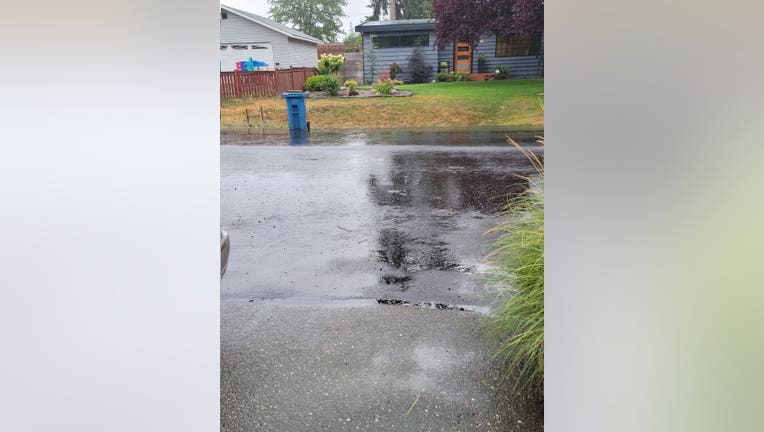 SEATTLE - For many around the Puget Sound region Tuesday morning, there was a sight that hadn't been seen in over a month: Puddles. Drips on windows. Things falling from the sky that wet your hair if you let it.

A weak trough of low pressure really juiced up the marine cloud layer (it was 2,000-3,000 feet thick!) to the point where it squeezed out some mid-summer drizzle. It was literally a sight for sore eyes for many, especially if you kept your eyes open as you looked skyward.

Some stations measured 0.01-0.04 inches of rain. A few along the King-Snohomish County line measured up to 0.10 inches according to CoCoRahs data!

So that whole "it's been 35 days without rain in Seattle" narrative is dead now, right?

Official data is kept at Sea-Tac Airport, and while it did drizzle there for a few hours Tuesday morning, it only amounted to a "Trace" of rainfall -- not enough to measure. This dry streak we've been tracking is consecutive days without measurable rain – meaning it needed to be 0.01 inches. So while many spots did get that and more, Sea-Tac, did not.

Streak on. It's now at 36 days and counting. Even if your own neighborhood streak ended.

Heading into driest time of the year

And that 36-day streak now has free, ahem, rein to run for several more days as we head into the statistical driest part of the year.

The last week in July and the first week of August have rain in Seattle about as often as someone orders a coffee with only one adjective.

July 30 and Aug. 4 share the distinction of being the driest days of the year with measurable rain just 9 times in the past 127 years. The surrounding dates aren't much wetter:

So that dry streak could stretch well into the 40s, if not the 50s as there is no rain in sight. The record is 55 days set during the summer of 2017 though after the streak ended on Aug. 12 it went another 35 dry days for an impressive 90-out-of-91 day stretch with no rain.

Let's not try to match that.