Soaking rains for most

More heavy rain Monday, but it could turn into rain-snow mix for some.

SEATTLE - Happy solstice! We've got a strong front pushing across Western Washington today that will deliver some of soggiest conditions we've seen all month. Rain will be heavy at times through the morning and into the early afternoon with breezy winds whipping in from the south. 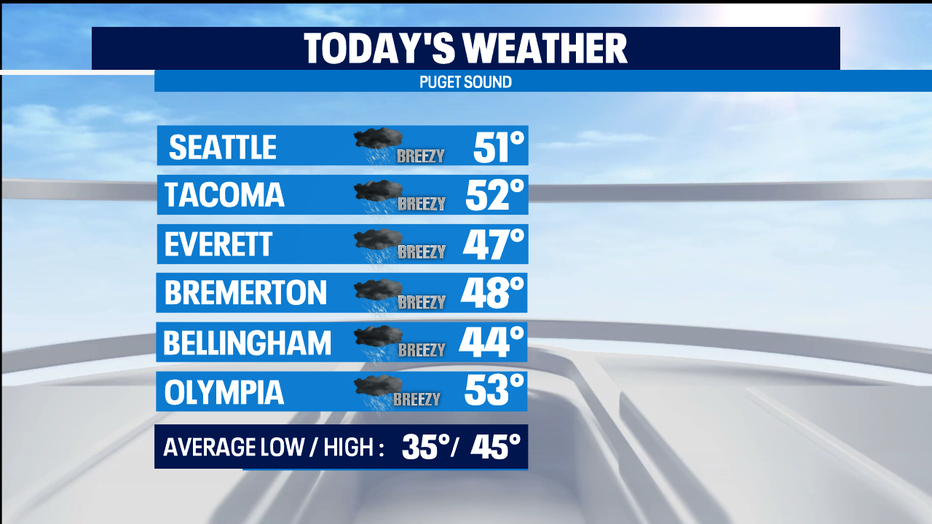 We could see 1-3" of rain today in the lowlands. Temps will be mild this morning, hitting their highs today in the late morning and early afternoon before the cold front sweeps through. 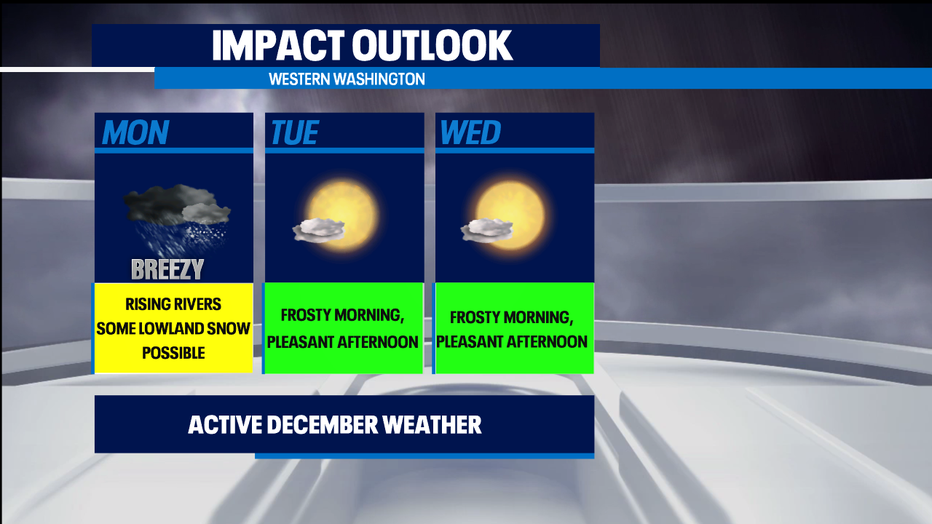 Once the front passes, we'll see much colder air moving into Western Washington. That will mean 1-2 feet of snow for the Olympics and the northern Cascades where there's a Winter Storm Warning until 7p. The Central Cascades will be under a Winter Weather Advisory starting at 4p and going until 4a on Tuesday with 7-11" of new snow tonight for Stevens and Snoqualmie Passes. 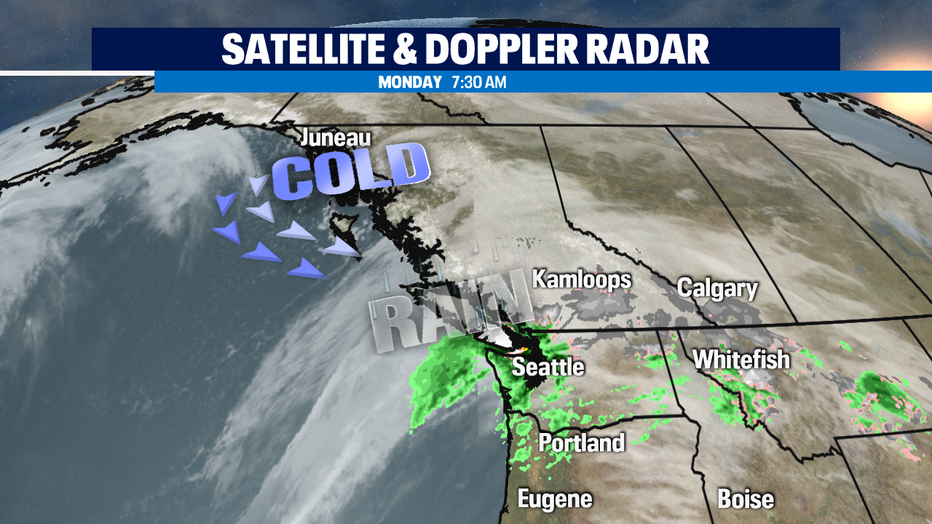 Snow levels will lower significantly tonight. But the cold air will be drier air-- so it will be a battle of the air masses this evening. The greatest chance of low elevation snows is in the Cascade foothills about 1,000 feet where accumulations could be a trace to 3" of snow. But heavier downpours can bring the snow level almost down to sea level for a short spell. Not much for accumulating snow is likely below 1,000 feet-- which is where most of us live. Rain/snow mix or chunky rain is still a chance-- but those big fat flakes we see when air temps are between 35-40 degrees don't usually stick anywhere but roofs and grassy areas. The one tricky spot with this kind of a weather pattern is along the Strait around Port Angeles, Sequim, and Port Townsend. 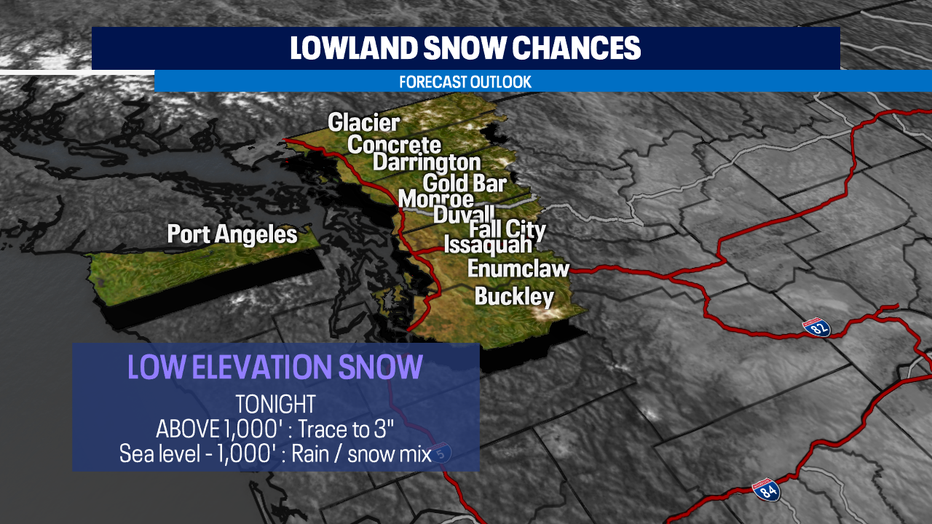 We clear out quickly tonight, so perhaps a chance to see the "Christmas Star" tonight. Look to the south-southwest horizon just after sunset for about 60-90 minutes to see the conjunction of Jupiter and Saturn. You'll even be able to see it around city lights, provided the skies clear out in your neighborhood. The coastal areas and Olympic Peninsula see the best viewing chances. The two gas giants will be so close that to most observers they two planets will appear almost as one. With even binoculars you could see Jupiter's moons and, maybe a little fuzzier, the rings of Saturn too. 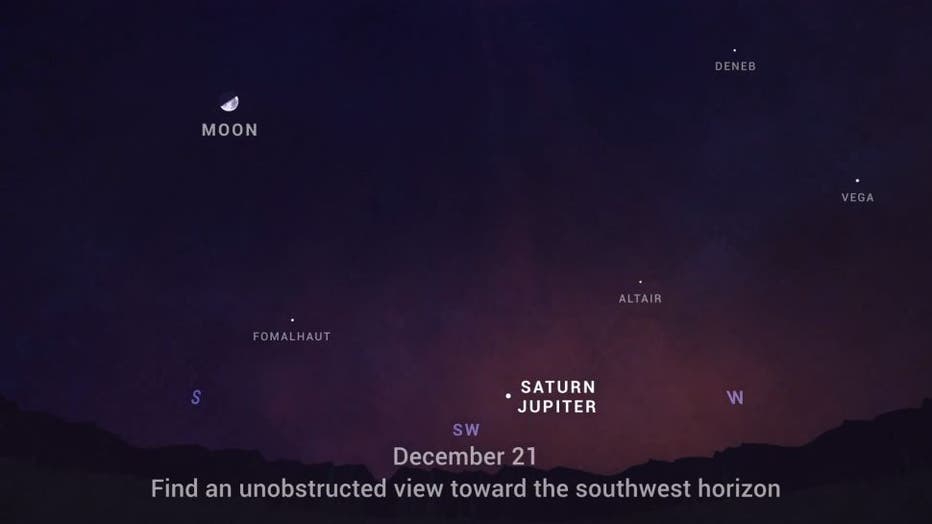 Snow will continue to taper off in the mountains tomorrow morning. But, places that see snow tonight could be slippery in the morning. Any lowlands snow will melt away with highs in the low 40s for Tuesday. The next several mornings will be frosty but afternoons look pretty pleasant. Christmas Eve clouds will increase and we'll see some showers for Christmas day. 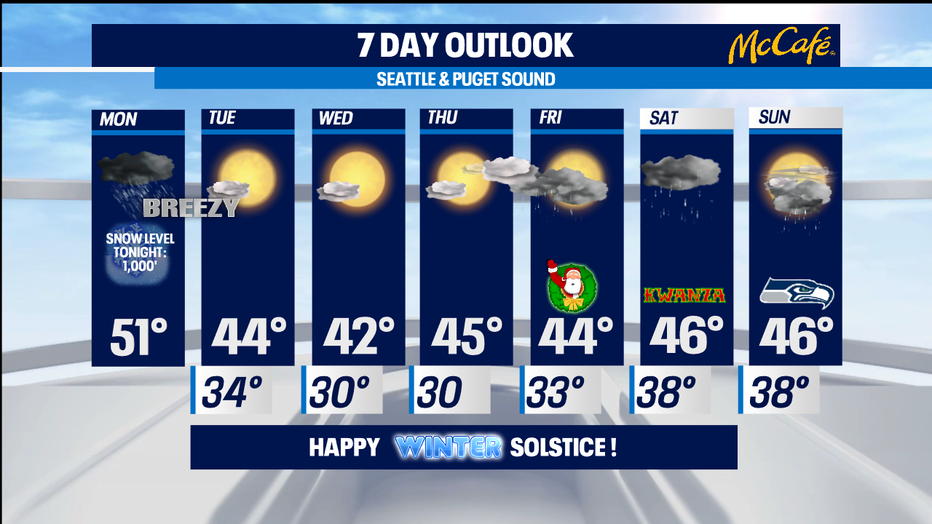 The weekend looks pretty wet with some soggy weather on Saturday and some showers for Seahawks gameday on Sunday. -Tim Joyce