The peak time for this storm's most significant impacts in the central and eastern US should occur between Wednesday night and Friday morning. (FOX Weather)

A strong winter storm tracking across the central and eastern United States will bring heavy snow, ice, flooding rain and high winds as it moves through the Plains, Midwest and Northeast into Friday morning.

The storm system is currently spreading snow, sleet, freezing rain and plain rain from the Central Plains into the Midwest, southern Great Lakes and interior Northeast. 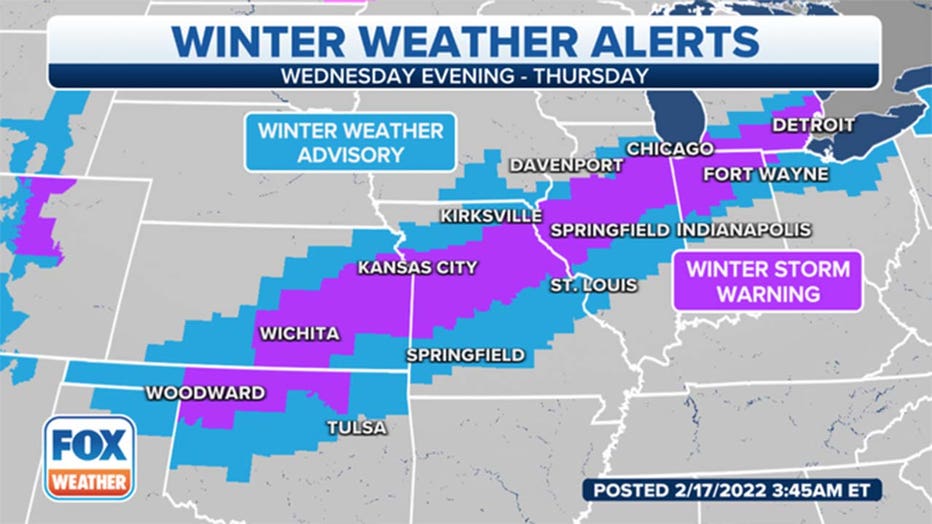 Winter Storm Warnings and Winter Weather Advisories are in effect on Thursday, Feb. 17, 2022. 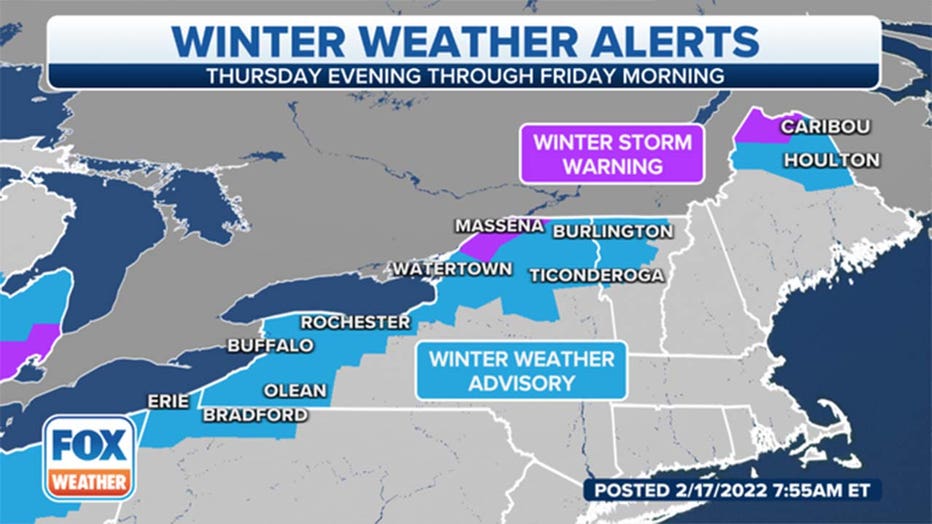 There's also a threat of severe thunderstorms, including tornadoes, on the warmer side of the storm system through Thursday evening in parts of the South. Be sure to download the FOX Weather app for the latest forecast and weather alerts for your exact location, plus our channel's 24/7 livestream.

Timing the snow, ice and rain

Snow is likely on Thursday from portions of northern Oklahoma and southern and eastern Kansas into parts of Missouri, Illinois, northern Indiana, northern Ohio and Lower Michigan.

NOAA's Storm Prediction Center said the snow could fall at the rate of 1 to 2 inches per hour in portions of the Midwest. 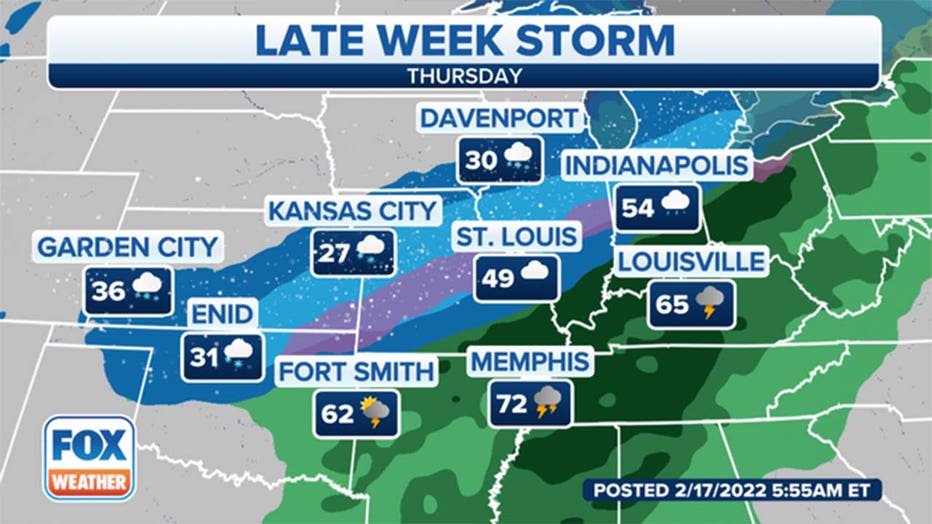 Meanwhile, a soaking rain will drench areas from the Deep South into the Ohio Valley and interior Northeast on Thursday. The rain might be heavy enough in some spots to result in localized flash flooding.

According to NOAA's Weather Prediction Center, the greatest risk of flash flooding through Thursday night stretches from portions of the mid-Mississippi and Ohio valleys to western Pennsylvania, upstate New York and Vermont. 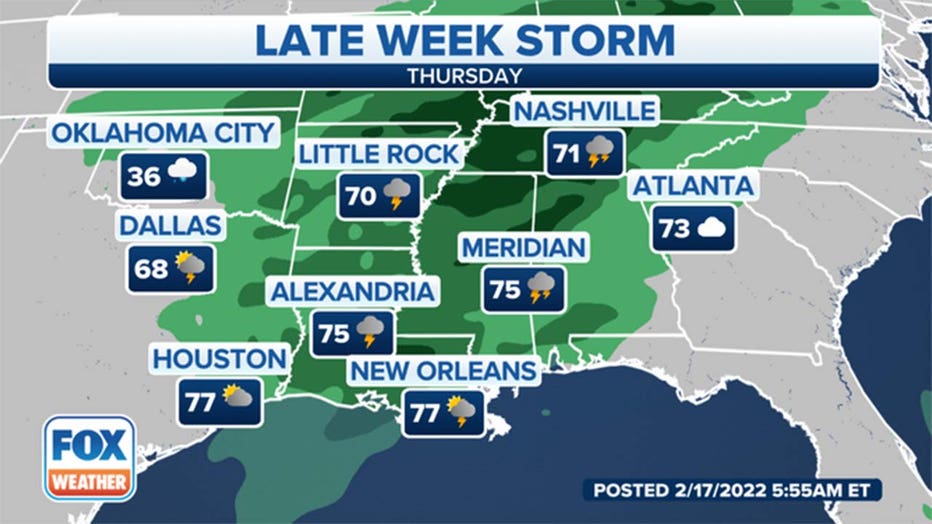 High winds are also expected over a large portion of the South, Midwest and Northeast. In parts of the Central Plains and Midwest where snow is falling, that could result in blowing and drifting snow with low visibility. This would make driving conditions even more dangerous than they already would be from the snow alone.

The rain and gusty winds will reach the East Coast Thursday night, including the Boston-to-Washington Interstate 95 corridor.

Enough cold air might arrive overnight for the rain to change over to a period of snow or ice in portions of the Ohio Valley, interior Northeast and northern New England. However, areas near Interstate 95 will likely stay warm enough for all rain. 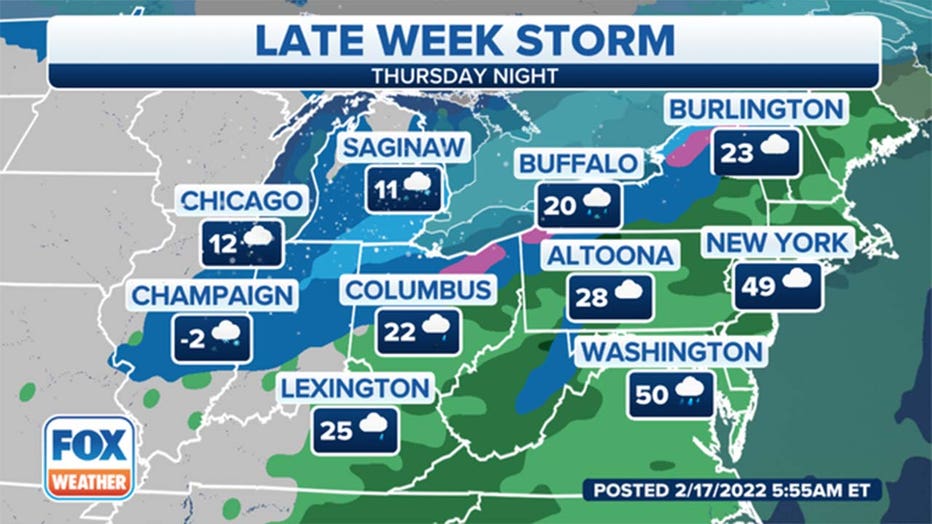 Rain will continue along the East Coast into early Friday morning before the storm pushes off the Eastern Seaboard later in the morning.

Some lingering snow is also possible in the interior Northeast and northern New England on Friday morning.

However, strong, damaging winds will impact portions of the Northeast coast Thursday night into Friday morning.

High Wind Warnings have been issued by the NWS for parts of New England and Long Island due to the potential for gusts up to 65 mph. Winds of that magnitude can cause tree damage and power outages. The highest risk of widespread power outages and downed trees is from eastern and southeastern Massachusetts into Rhode Island.

Wind Advisories have also been posted for many other areas of the Northeast and mid-Atlantic, where gusts up to 50 mph are possible. That could trigger a few power outages and break some tree limbs. 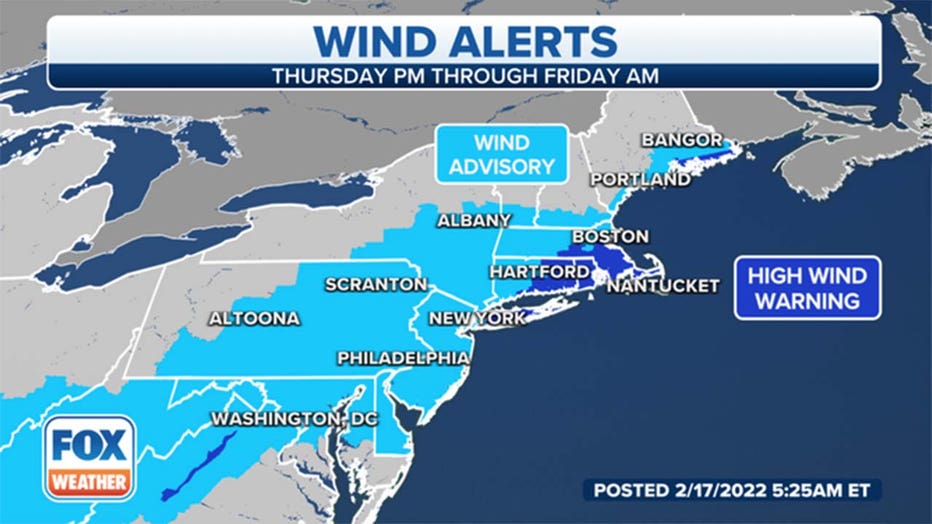 Wind alerts are in effect across the mid-Atlantic and Northeast. (FOX Weather)

A narrow band of 6-plus-inch snow totals is predicted from parts of eastern Kansas to southeastern Lower Michigan, the St. Lawrence Valley of upstate New York and far northern Maine. Up to a foot of snow is not ruled out in some of those areas in the Midwest.

There will likely be a very sharp cutoff in snowfall totals north and south of that heavier narrow band. 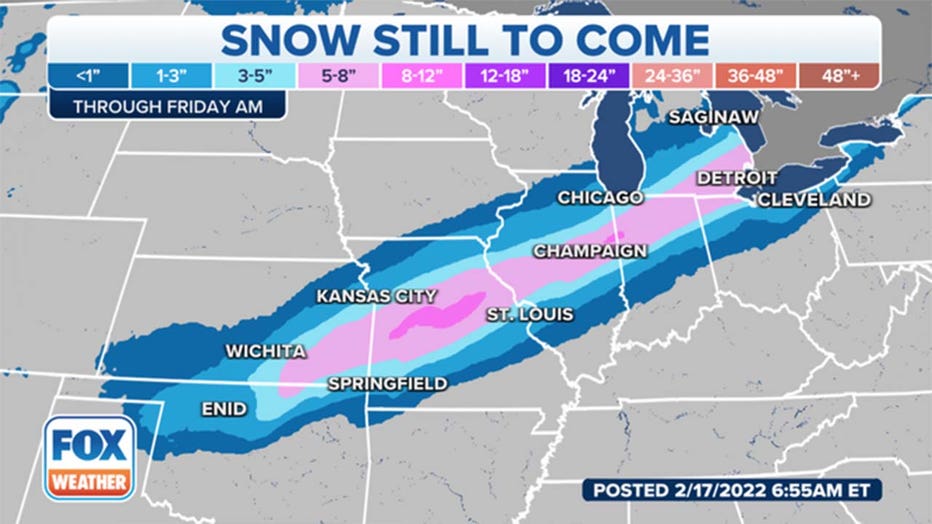 There could also be some light ice accretion from portions of northeastern Oklahoma into the mid-Mississippi Valley and eastern Great Lakes. That would cause any untreated roads, especially bridges and overpasses, to become slippery.

Localized tree damage and scattered power outages are also possible in the areas shaded in a lighter pink on the map below, but we do not expect a widespread, disruptive ice storm in this region. 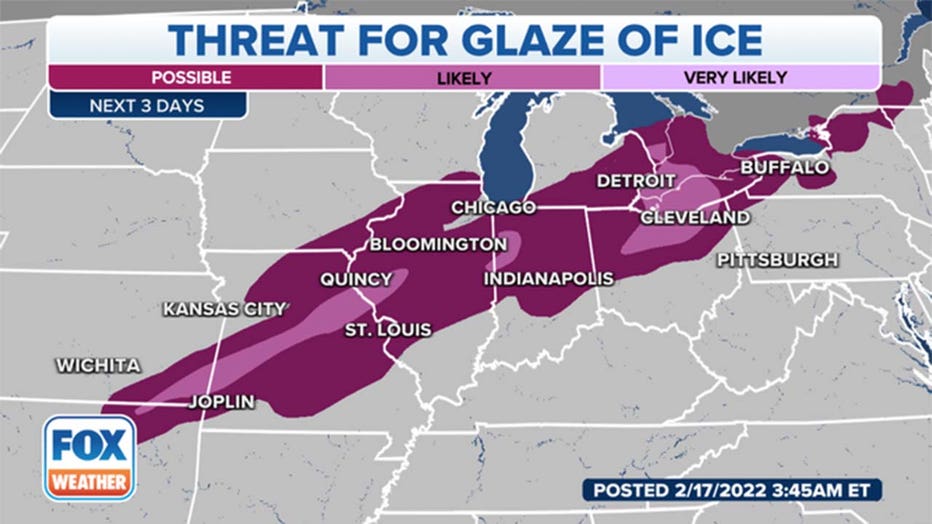 Threat for a glaze of ice in the Midwest and interior Northeast. (FOX Weather)

On the warm side of this storm, at least an inch of rain is expected over a broad area from the Deep South to the Ohio Valley, southern Great Lakes and parts of the interior Northeast.

Locally higher rainfall totals between 2 and 3 inches are possible in some locations, particularly in the Ohio Valley. 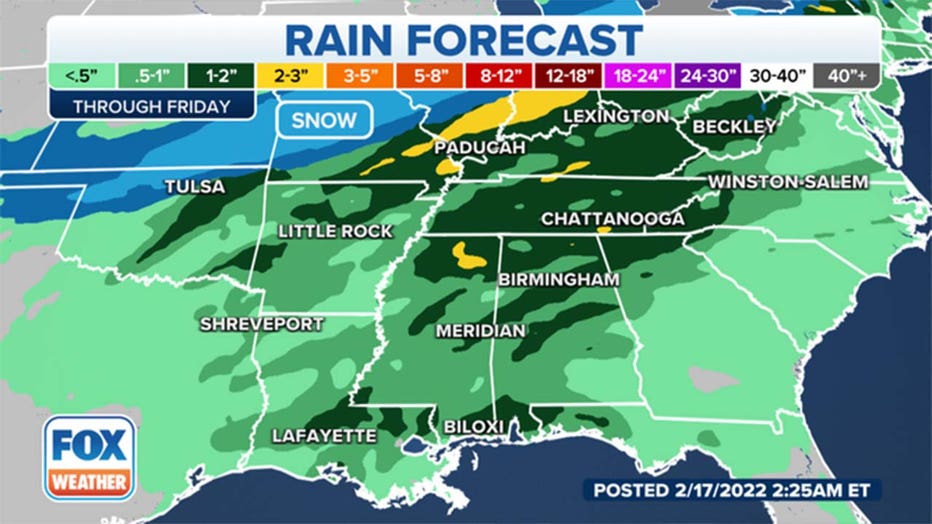 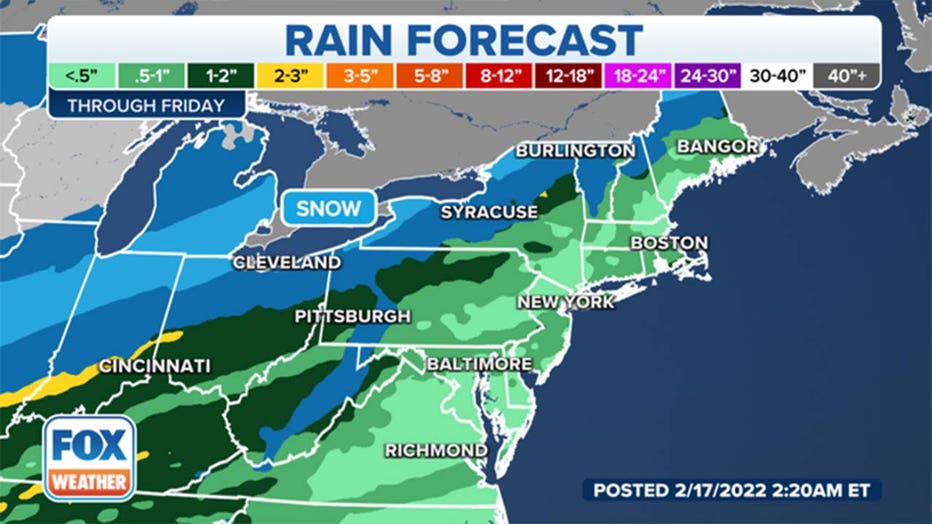 The rain could lead to flooding in parts of those regions.

As a result, Flood Watches have been hoisted by the NWS from southern and eastern Missouri to the Ohio Valley, southern Great Lakes, northern Pennsylvania, upstate New York and Vermont. 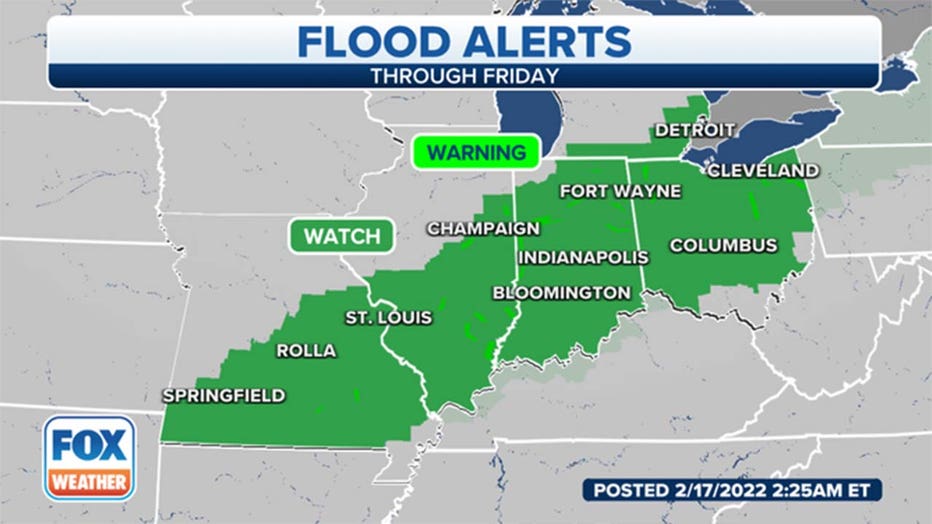 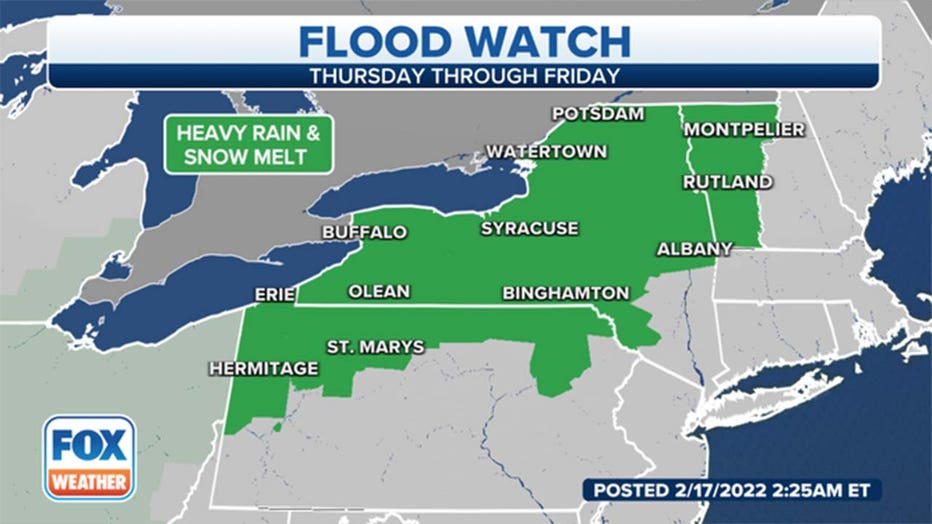 In addition, ice jams are a concern on rivers in the southern Great Lakes and interior Northeast due to warmer temperatures ahead of the storm followed by locally heavy rainfall when the storm arrives.

The Denver metro area then picked up 3 to 6 inches of snow Wednesday into Wednesday night as the storm dropped south and eastward through the Rockies. The higher elevations west of Denver received up to 8.8 inches.