SEATTLE - We'll continue to run cool this week with high temperatures barely making their way to 60 most days. Tuesday looks no different!

Highs will only land in the mid- to upper-50s. Average seasonal high for this time of year is 65 and jumps up a degree to 66 on Wednesday. 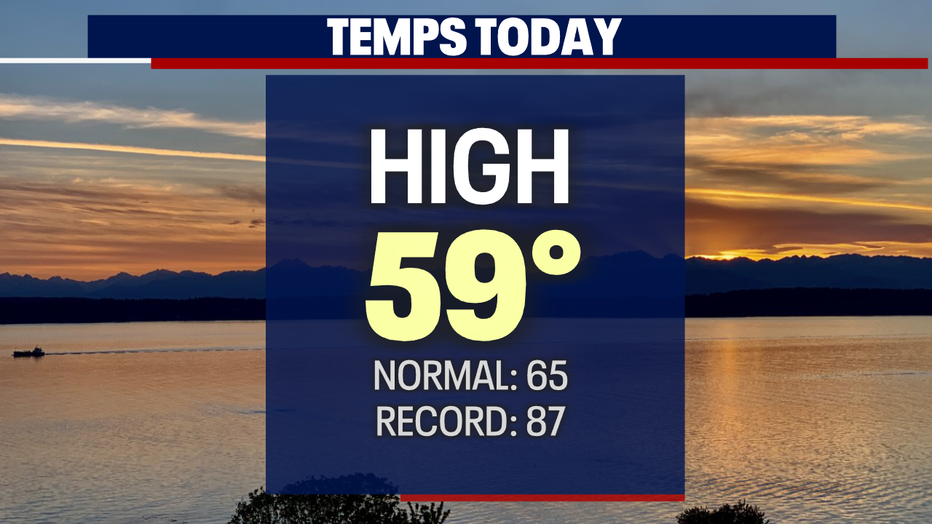 The back-and-forth fight between high and low pressure rolls on this week. Wednesday will feature a mainly dry day, but temperatures out of the gate will be cool. 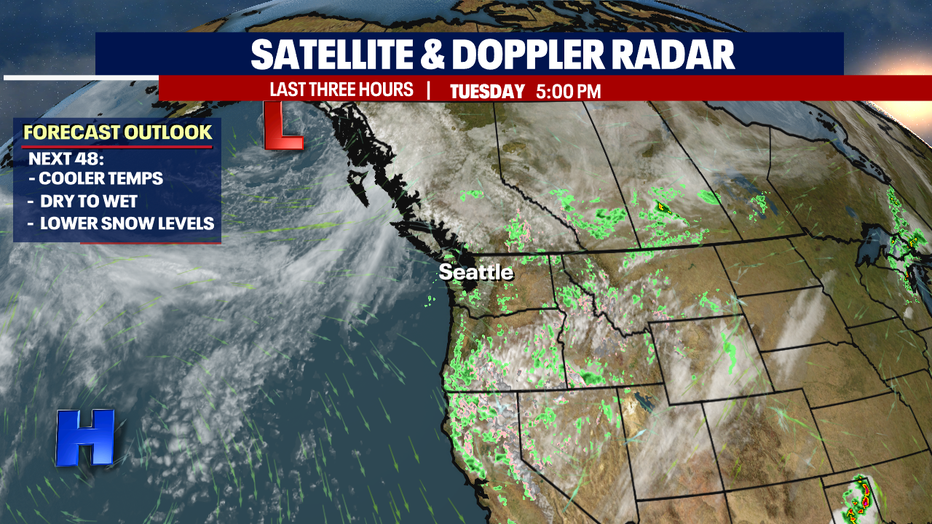 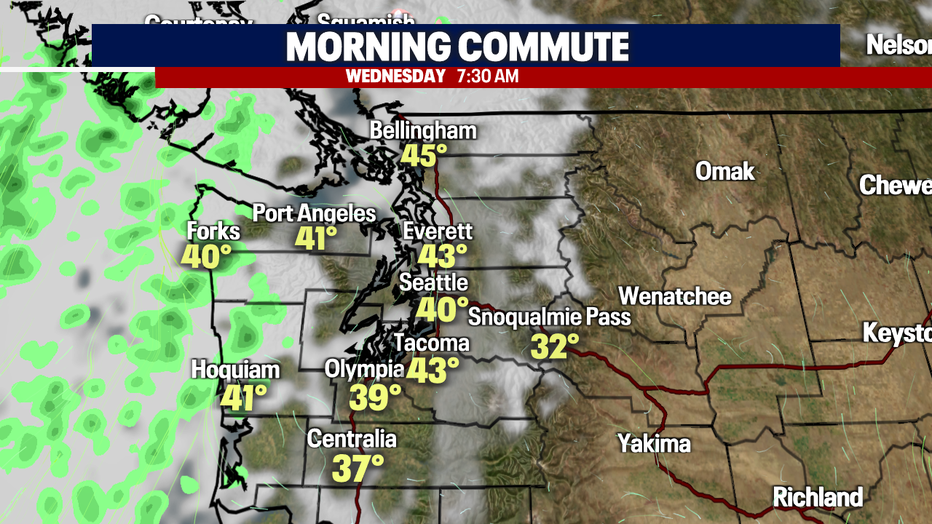 East of the Cascades morning lows even colder and that is why we have a "Freeze Warning" in effect from 2am to 8am for portions of the lower Columbia Basin to Spokane. 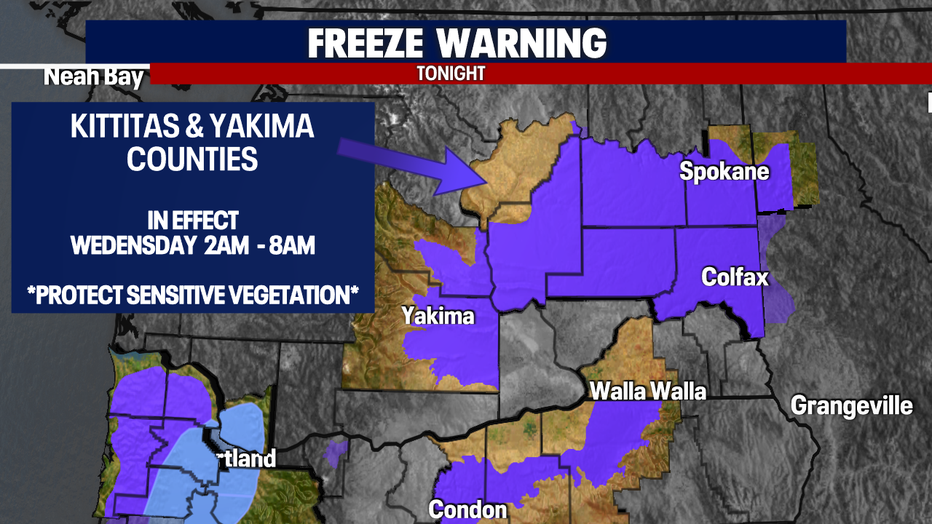 And it's not just Washington experiencing the chilly temps; most of the West Coast will be under similar alerts tomorrow. 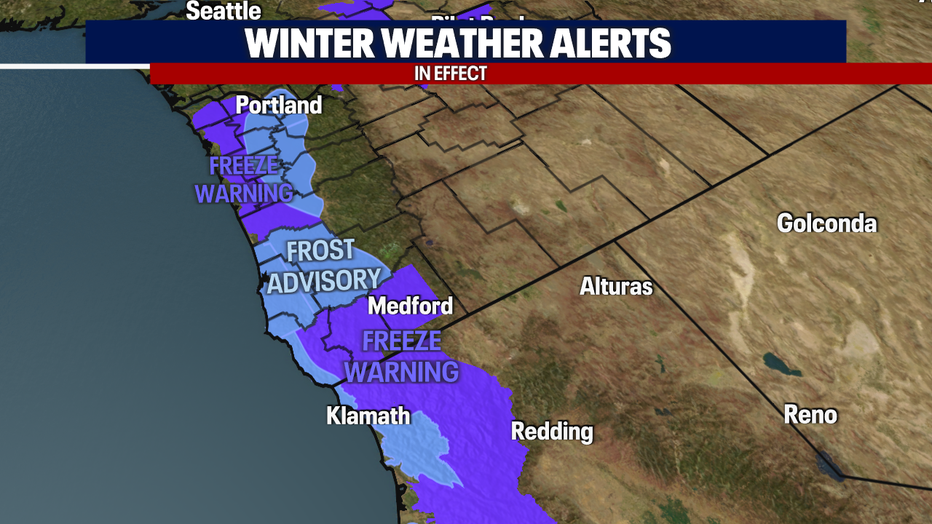 By the end of the day Wednesday, we'll introduce the next system which hits the coast first right after dinner. 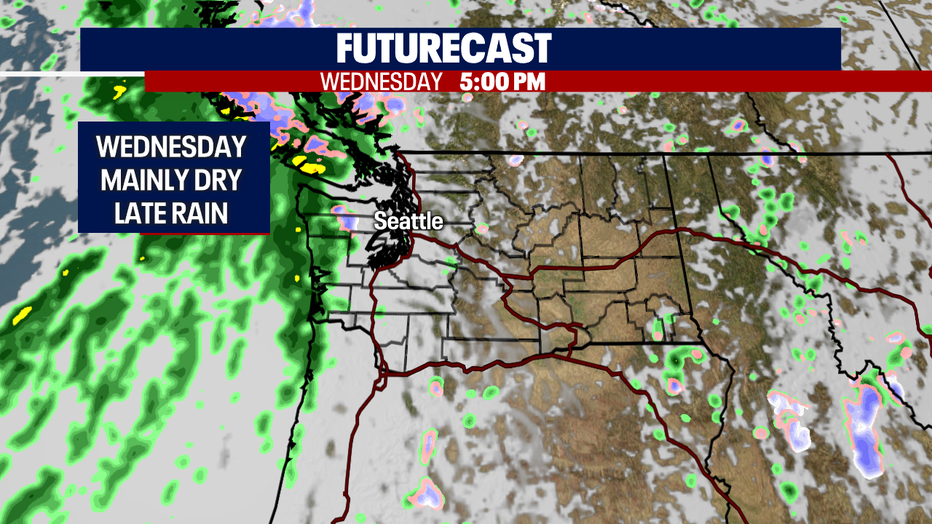 Highs Wednesday will run anywhere from 5-10 degrees cooler than average. 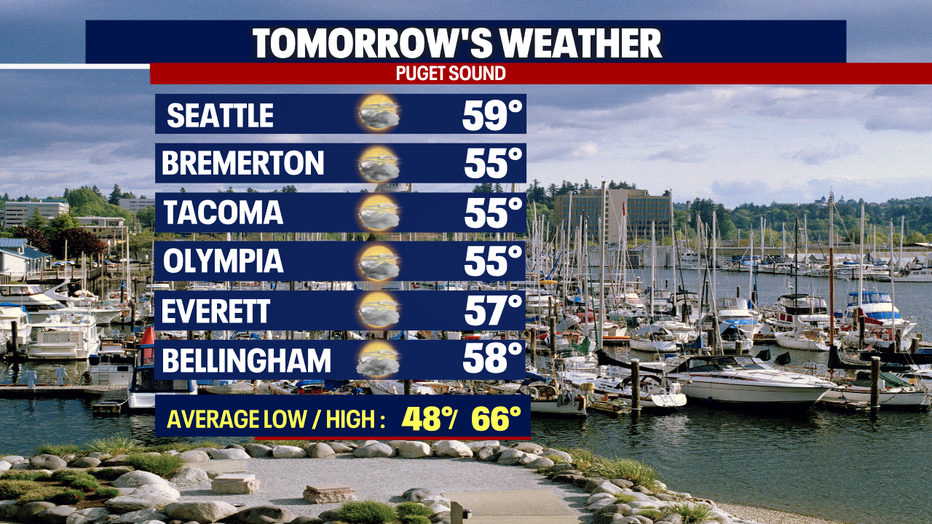 Showers march inland overnight Wednesday into Thursday. By 1pm most of the I-5 corridor is soggy from the north Sound to the south end. 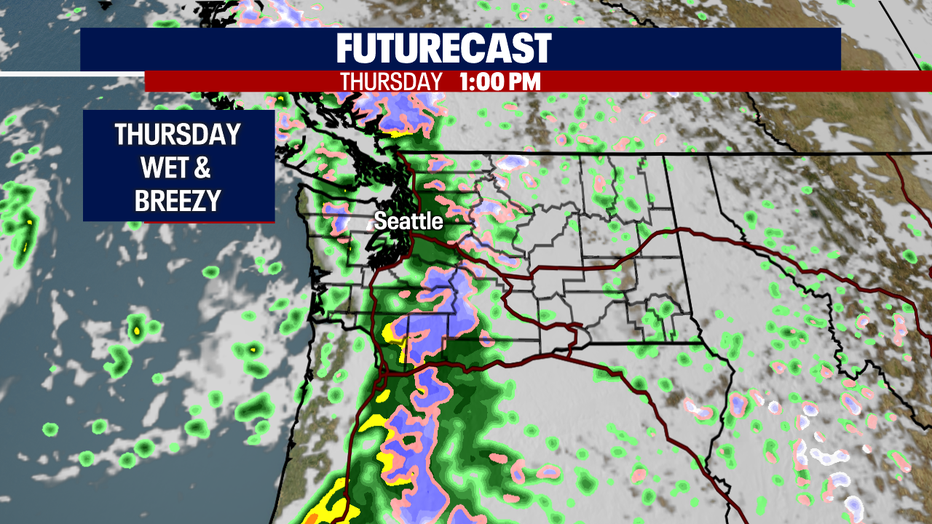 Seattle has the potential to see the most amount of rain along I-5 as the front pushes east. We're forecasting just over an inch in the bucket at SeaTac. 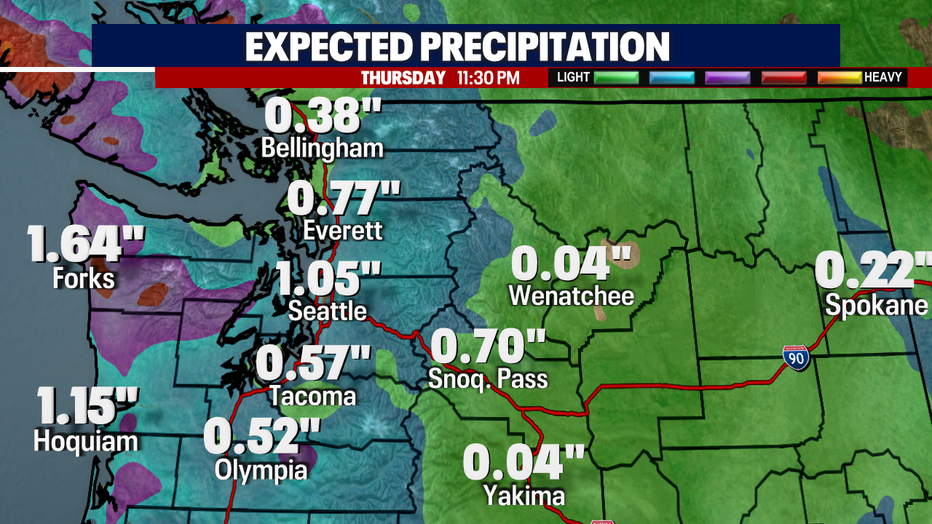 There is a slight chance of a thunderstorm as the system slowly tracks east over the Cascades late in the afternoon/evening. Highs Thursday dive back down into the low 50s.

Friday sees a brief break with highs warming into the upper 50s ahead of the next system.

Although the weekend will see slightly warmer highs near 60, the rain does return yet again. Saturday looks to be the drier day with Sunday rainy and sloppy at times.

The start of next week is drier with highs in the upper 50s to low 60s. Enjoy! 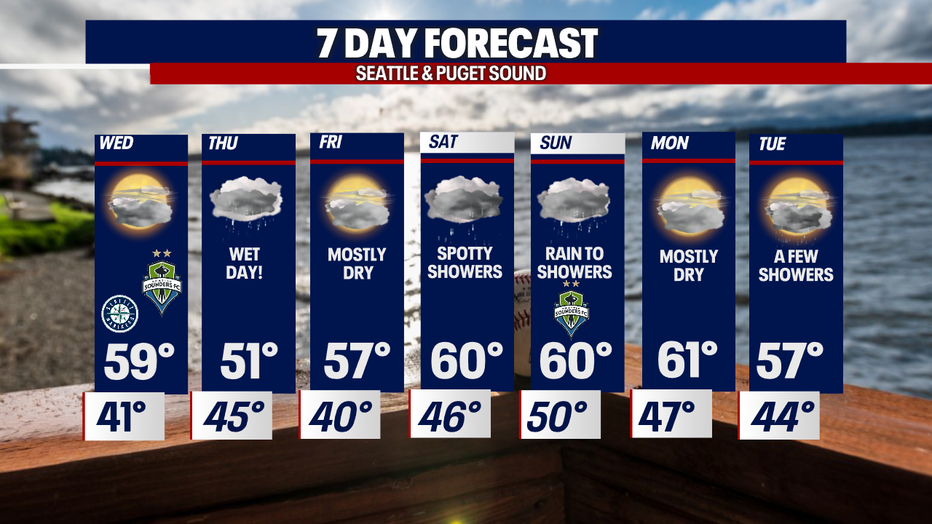 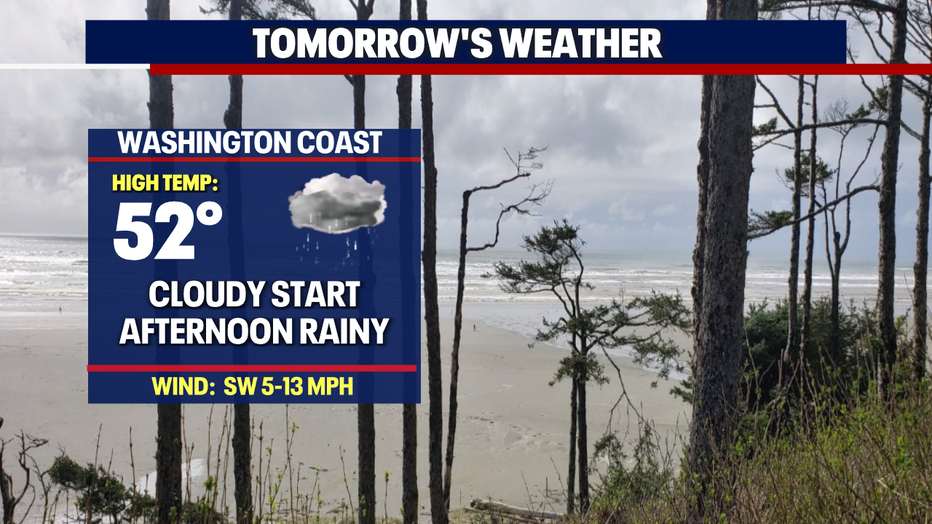 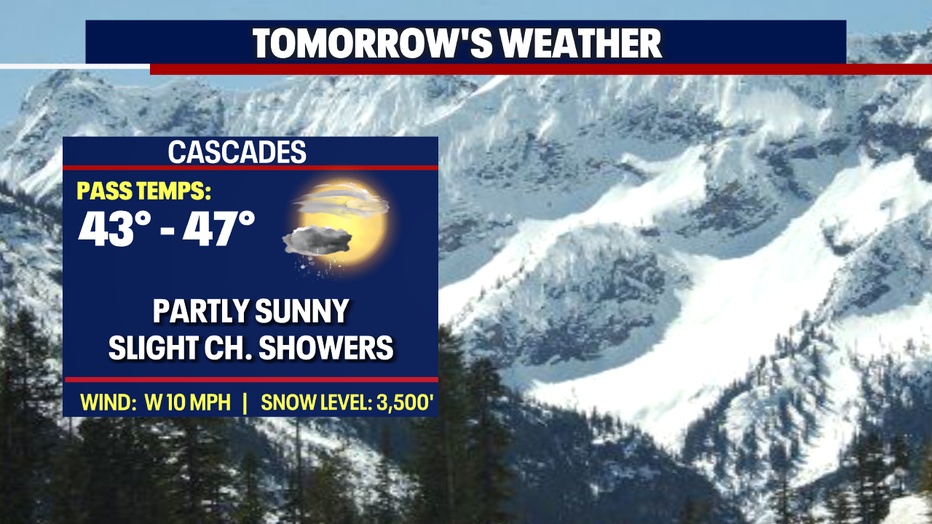 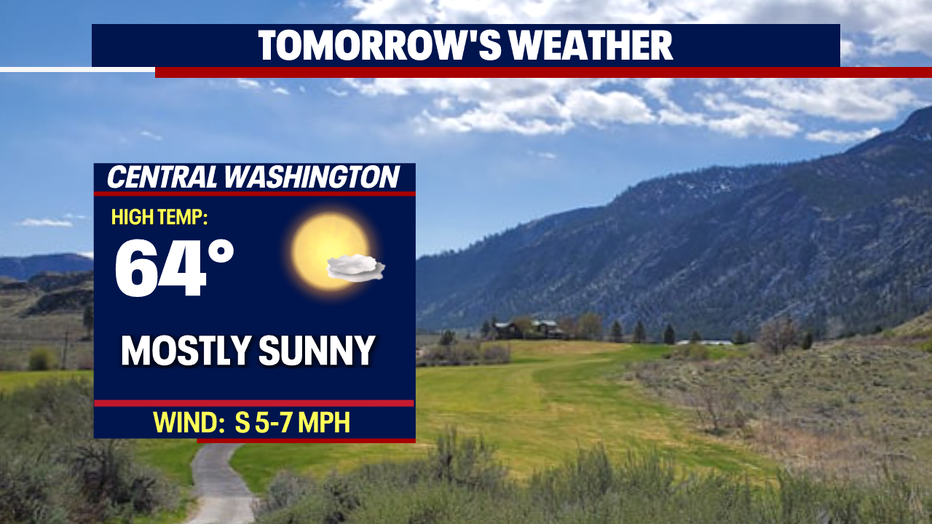