Wet and chilly week, but a DRY Halloween

Even though it's been a wet week—and there's more of that coming—we're looking to have a dry Halloween for the kiddos! FOX 13 Meteorologist Abby Acone has your full forecast.

SEATTLE - Hope you stay cozy and warm today! We're tracking soaking rain becoming widespread across Western Washington by later this afternoon and tonight. Fewer showers are in the forecast for Halloween. 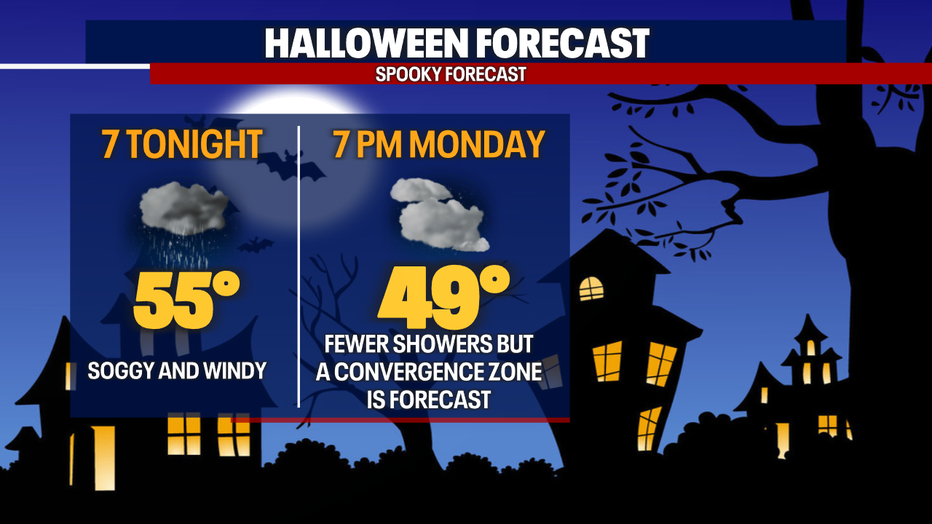 So far today (just as expected), rain has fired up over the Olympic Peninsula, coast, Strait and the North Sound. For much of this morning, Seattle and Tacoma stayed dry due to what's called the "rain-shadow effect." Due to westerly winds (which are in the mid to high levels of the atmosphere today), air dries out and compresses as it sinks down from the Olympics. However, once our incoming "atmospheric river" points farther south, rain will spread across all of Puget Sound this afternoon. An atmospheric river is a corridor of wet weather, this time originating from the subtropics. 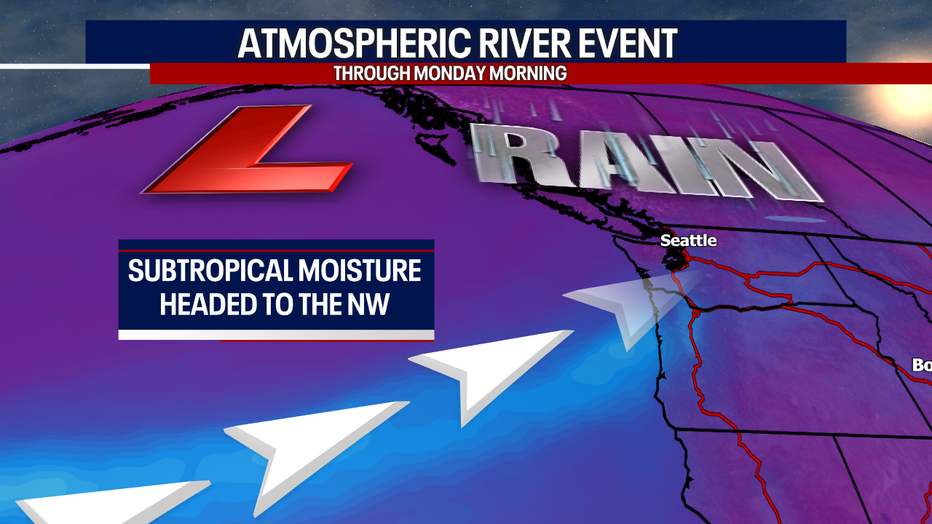 If you're heading to the Seahawks game today, be prepared for the rain! It'll be breezy too which will only make temperatures feel even cooler. Today is a great day for an umbrella (trust me, this isn't our classic drizzle that can be easily managed by a sweatshirt hoodie. This is steady, drenching rain).

Temperatures this afternoon will range in the mid 50s for most. Here's a look at temperatures at noon: 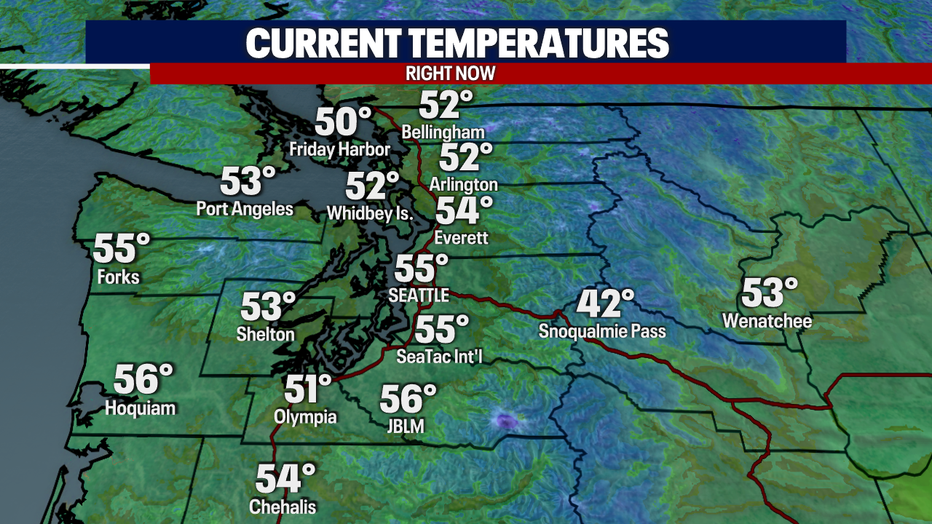 Let's talk about the winds. In the graphic below, you can see a Wind Advisory is in effect until 2 p.m. for Everett, Bellingham, the San Juans, Port Townsend and Whidbey and Camano Islands. Gusts could blow from 30-40 mph. Bring any outdoor Halloween decor inside! Also, spotty power outages are possible. 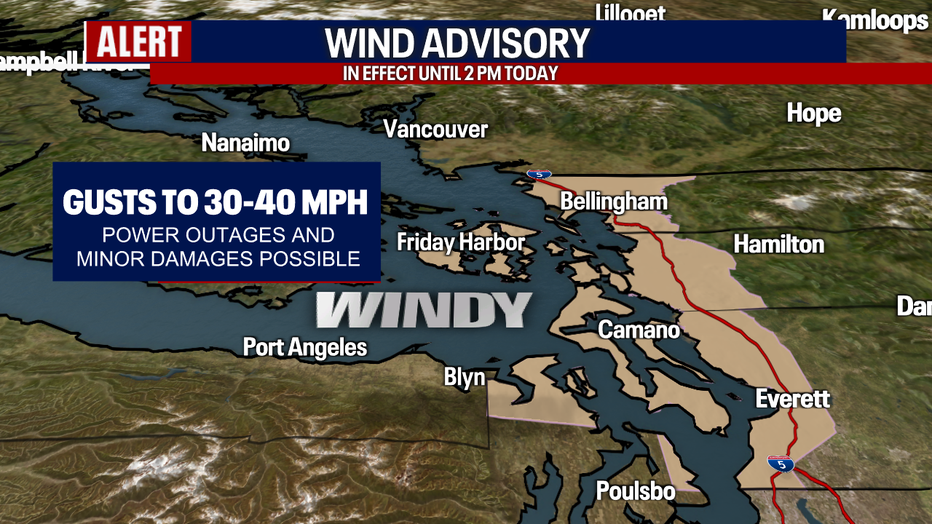 It'll stay gusty tomorrow morning, but the winds won't be as strong as what we're tracking today.

The waters off the Washington coast are rough today, but so far, there's only a Small Craft Advisory in effect there. For the inland waters surrounding the San Juan Islands, a Gale Warning remains in place until 2 p.m.

A few other notes: while some rivers could near flood stage, it's unlikely to see any flooding today and tomorrow. There are several big burn scars across the Cascades which could be vulnerable to flash floods if the rain gets heavy enough. According to the National Weather Service, flash flooding is unlikely to happen over these burn scars with this weather event, but we'll keep a close watch if anything changes.

Otherwise, the rain will be a nuisance today. It'll make roads super wet and slippery, too.

The latest forecast models are pulling back on rain chances for Halloween which is great news for kids and trick-or-treaters! Keep in mind: a convergence zone in parts of Eastern Skagit, King and Snohomish Counties could keep rain ongoing into at least late Monday. Make sure to check back with our forecast team throughout the day tomorrow as we monitor the showers. I'd recommend dressing the kids in warm layers as they go door-to-door. It wouldn't be a bad idea to bring an umbrella or rain jacket along just in case. 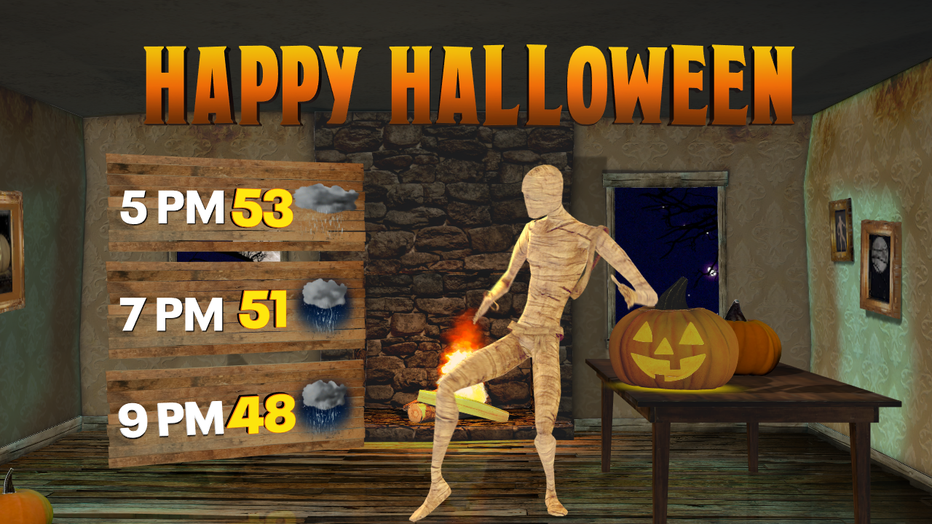 Here's a look at the timing of all our showers on Futurecast: 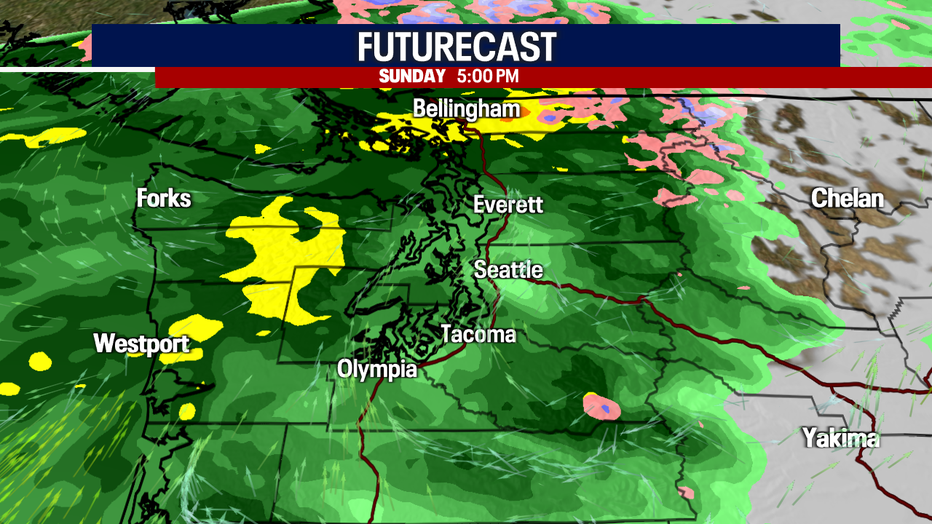 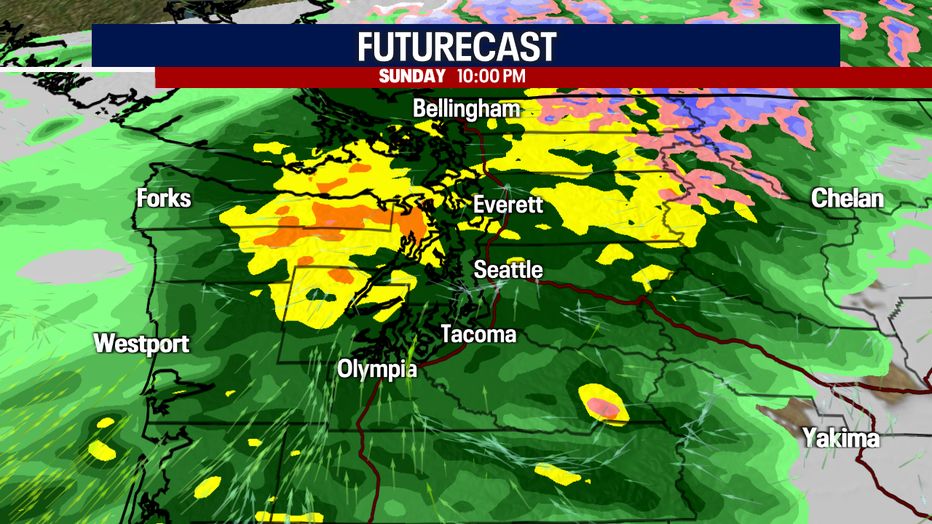 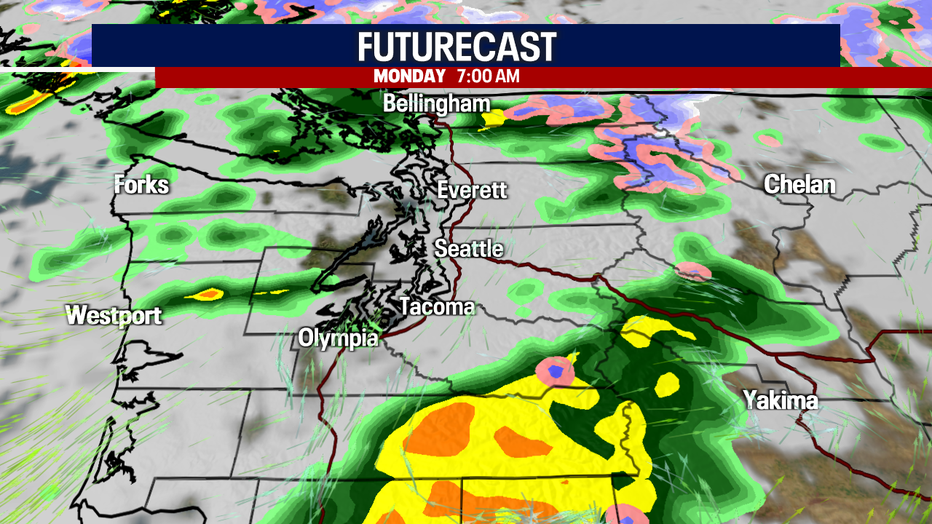 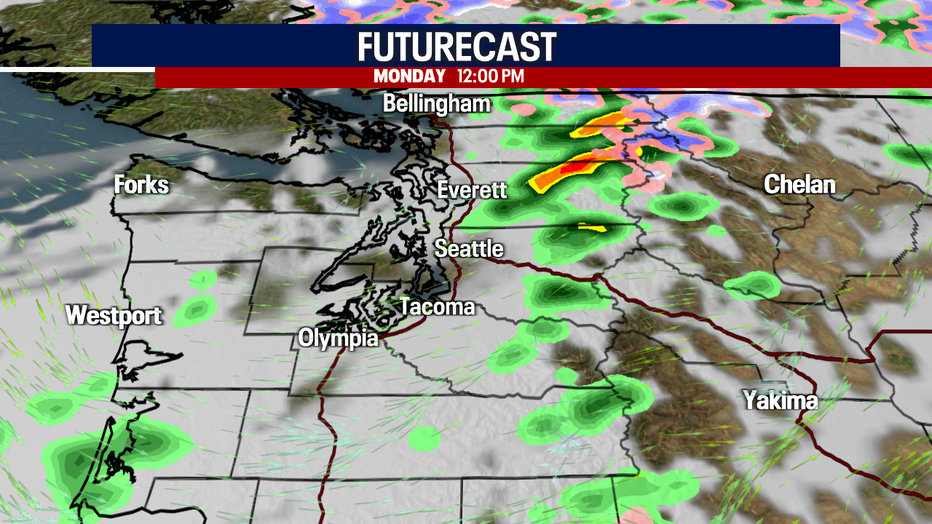 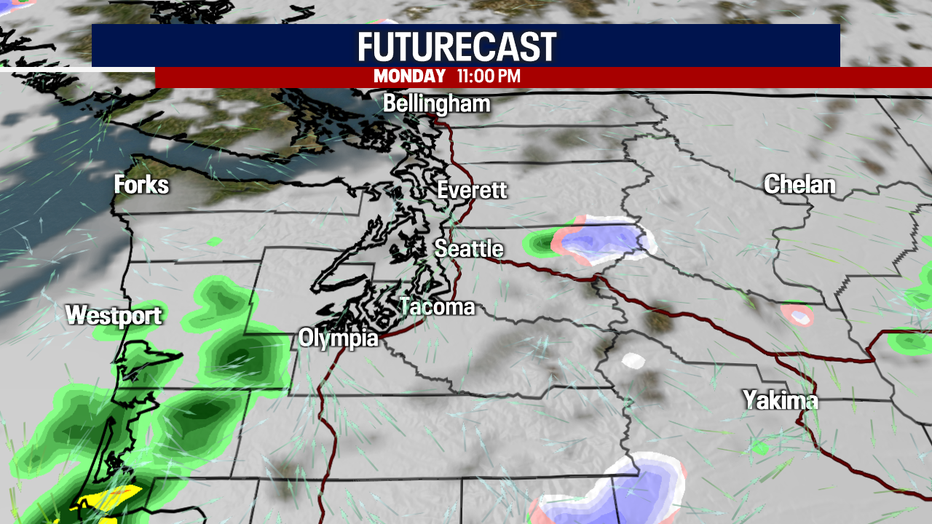 Here's your seven-day forecast! There may be light snow over the passes between Tuesday through Thursday, but showers look rather hit-or-miss. Wednesday and Thursday mornings will be quite chilly. For some outlying areas, valleys and the South Sound, temperatures could flirt with the freezing mark! Thursday may start foggy. If the temperatures drop low enough Thursday morning, there could be isolated freezing fog.

Our next system takes aim at Western Washington Friday, triggering rain and wind. Snow levels could drop to pass level on Saturday again. 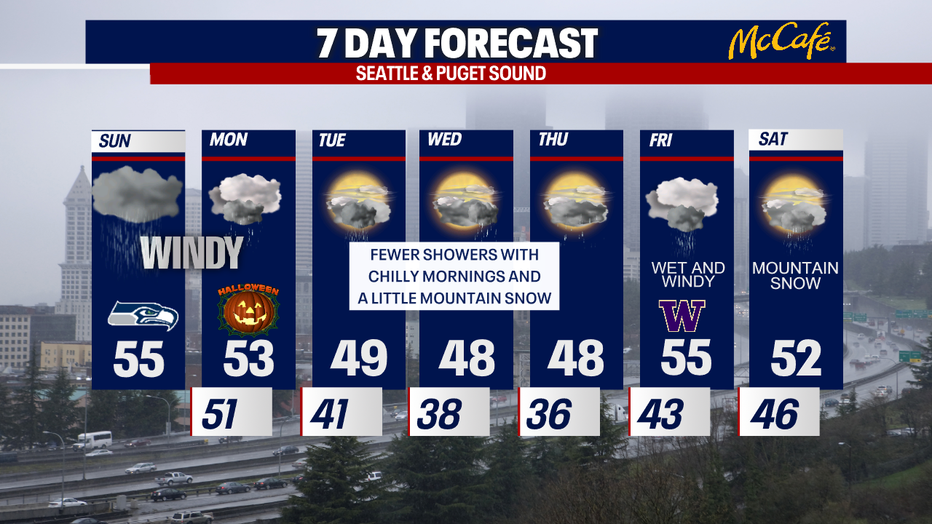 I hope you have a wonderful and safe Halloween! And as always - Go Hawks! :)