SEATTLE - Get ready for an active evening of weather across Western Washington! We're tracking strong, widespread and prolonged winds. Rain will be heavy, increasing the risk for flooding and landslides.

Coastal communities are facing a flooding threat today as high tides combine with low pressure in the atmosphere. Later tonight, mountain snow could be quite intense.

The strongest winds will likely happen between 4-7 p.m. Tuesday, but gusts are already picking up across Western Washington. Many communities from Seattle through Bellingham will see gusts to 50 mph. Gusts to 55 to 60 mph are in the forecast for Olympia and southward. While we can't rule out Seattle from seeing gusts to 60 mph, it's more likely to the south. Gusts in excess of 65 mph are possible for the Central and North Coast. The South Washington Coast could see winds of 60 to 80 mph! 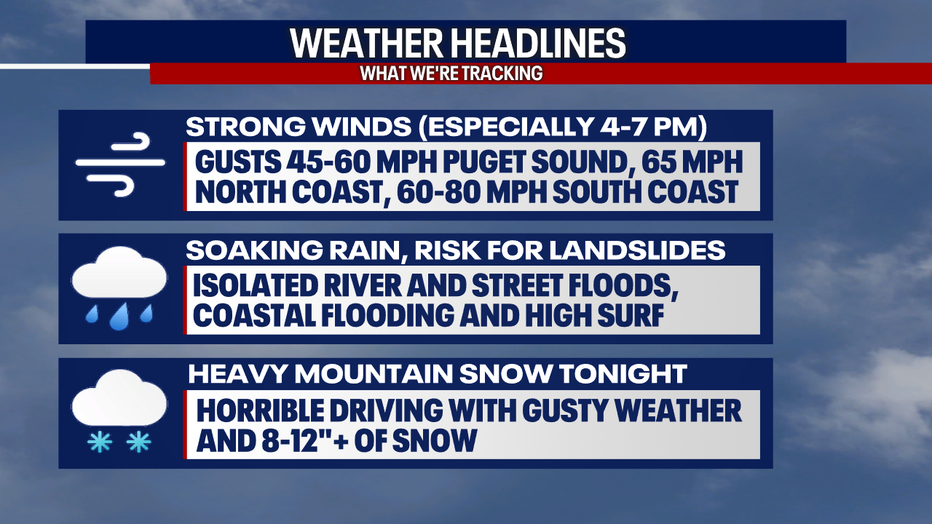 Due to these forceful winds, the National Weather Service has issued a High Wind Warning for everyone in the mustard color in the graphic below. Winds could bring down trees and power lines. Charge your phone and be prepared for outages. The saturated soil makes trees even more susceptible to falling or being damaged.

How to report a power outage, what to do to prepare and stay safe during a storm 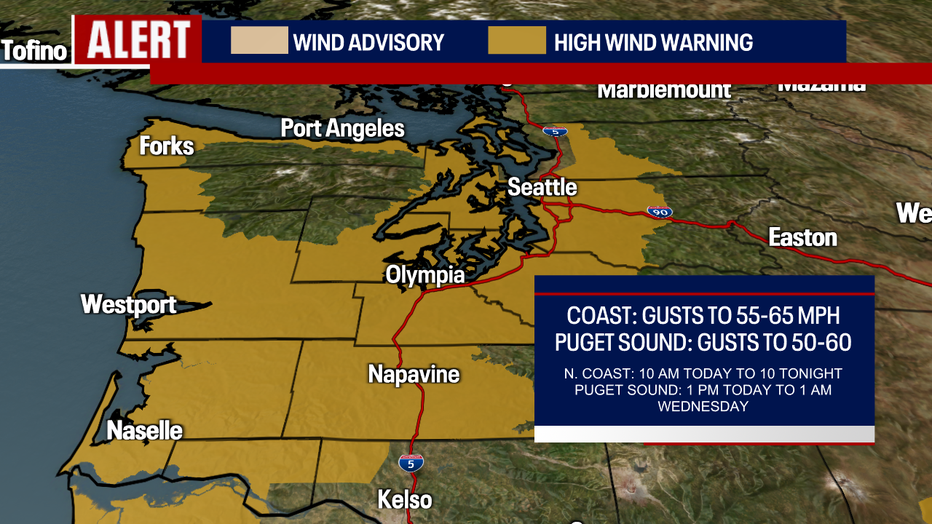 A Wind Advisory remains in place for Everett through Bellingham: 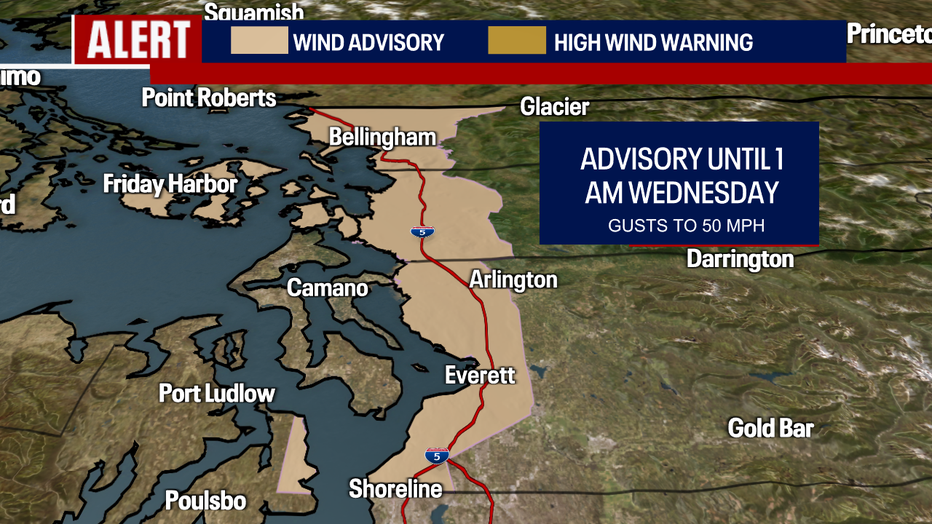 With the recent melting of snow and ice coupled with heavy rain, the ground is absolutely saturated. As heavy rain continues to fall in Western Washington today, the risk for landslides stays elevated. Watch for tilting trees or power lines. Listen for the ground crackling. These are just a few of the signs that a landslide may be imminent. 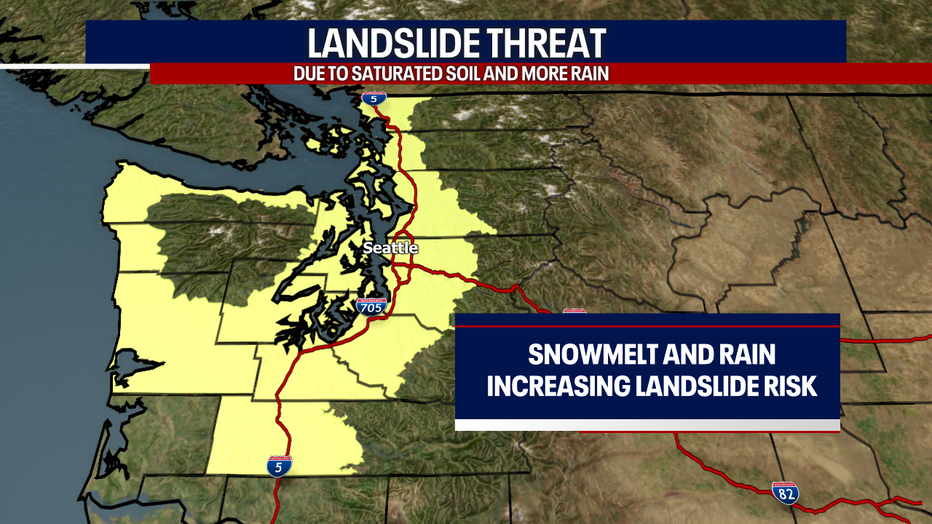 FOX 13 has been tracking flooding concerns along coastlines as king tides blend with low pressure in the atmosphere to produce flooding. For the most part, this flooding is minor; water will overflow into nearby parking lots and roads. Remember to never drive into flooded waters! There's a Coastal Flood Advisory posted through 1 a.m. for Puget Sound. Along the far Washington coast, the threat for flooding is more severe. That's where a Coastal Flood Warning has been issued until 10 a.m. Significant flooding could be dangerous. Even after high tide, swells could still build to 25 to 27 feet. Swells will subside later tonight. 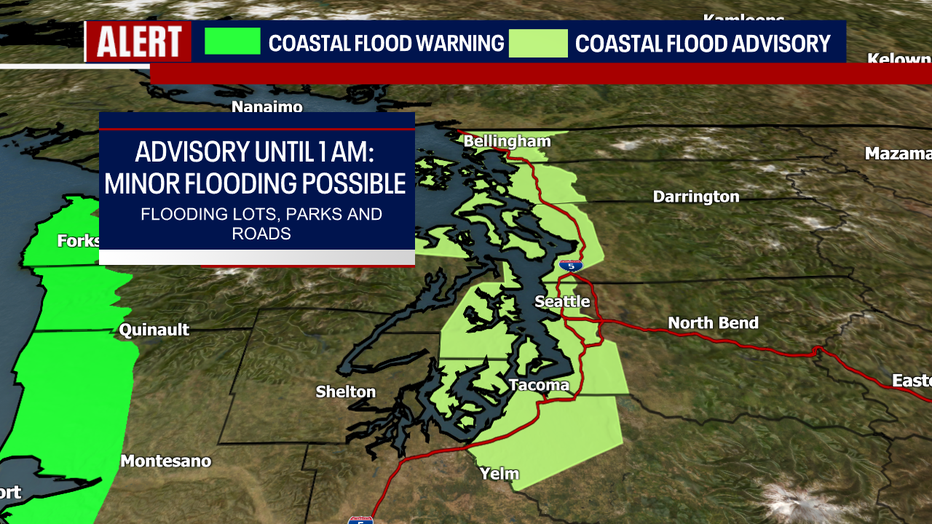 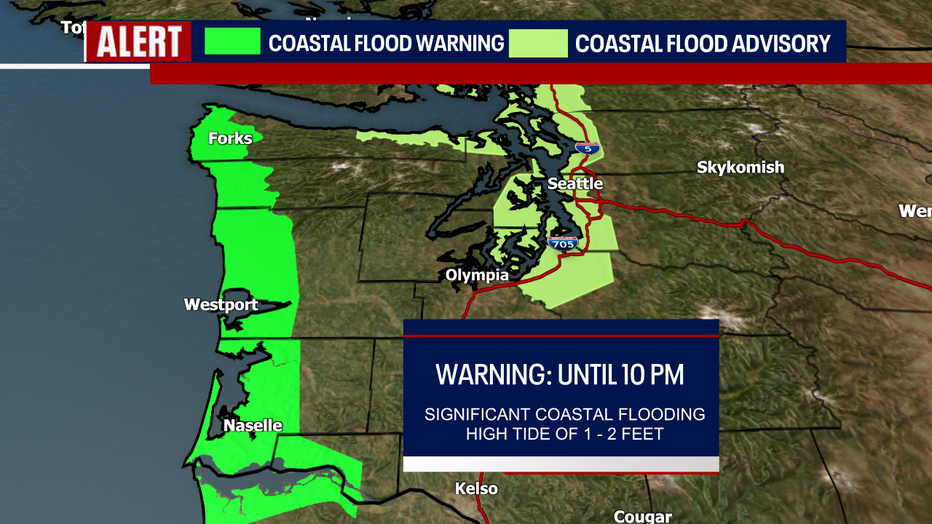 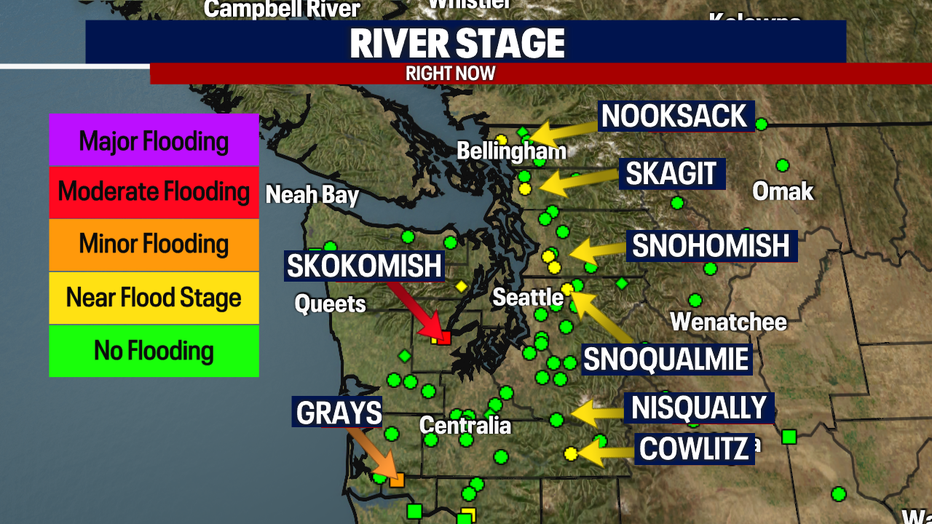 The National Weather Service is keeping in place a Flood Watch for almost all of Western Washington through Wednesday morning. This is to reflect the chance for river, stream and creek flooding. There could even be localized urban flooding where storm drains clog and heavy rain develops.

Know before you go: Winter weather driving tips, what to keep in your car 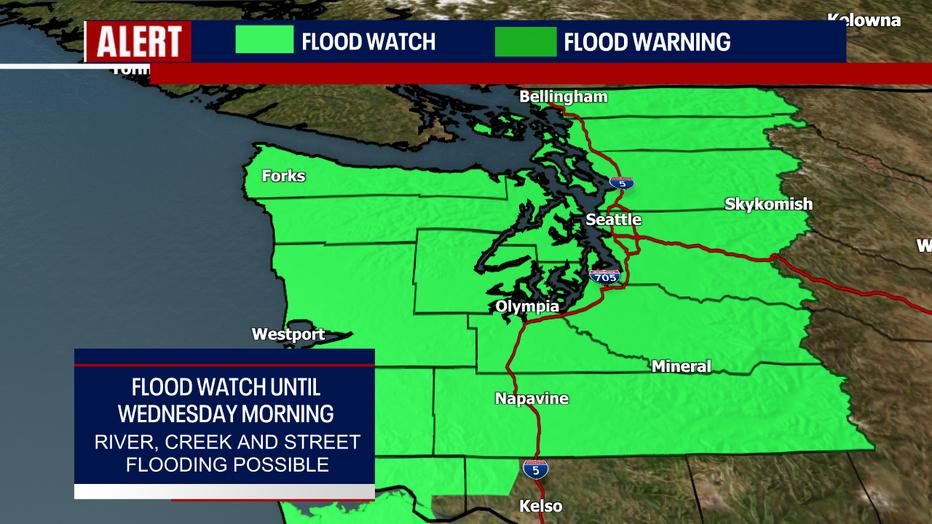 Later this evening, a Winter Weather Advisory applies to the Cascades above 2,500 feet. Gusts to 50 mph and heavy snow could make for super treacherous traveling. Visibility will be rather low. In fact, whiteout conditions are possible. Between eight and 12 inches of snow (if not more) could pile up over the passes by tomorrow morning. 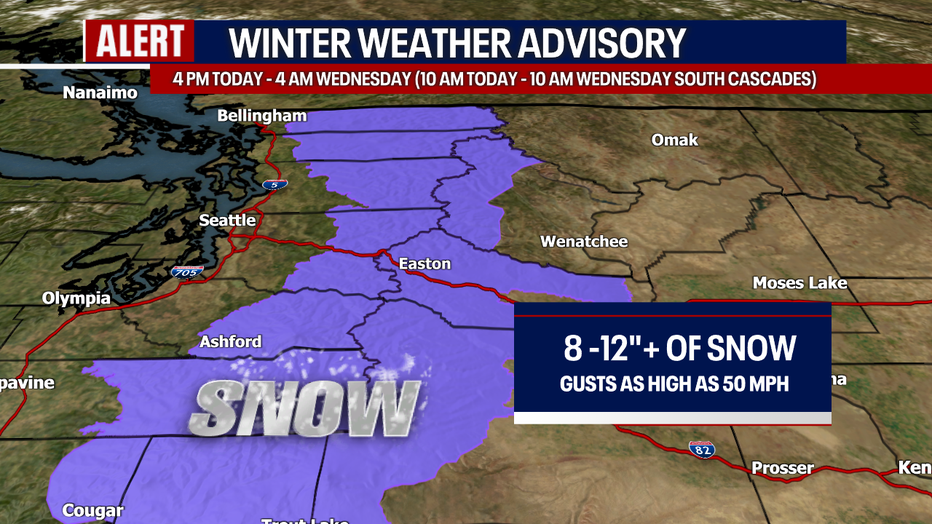 Wednesday will be much quieter weather-wise. There may be a convergence zone that bubbles up tonight to Wednesday morning. Otherwise, tomorrow should be a nice break from our active and stormy weather. Sunbreaks are even in the forecast!

19 hacks to keep your smartphone charged during a power outage

Thursday looks showery and cloudy. There may be some accumulating snow over the passes Friday (heads-up to holiday travelers!). For New Year's weekend, only isolated showers are in the works. The weekend certainly won't be a washout: that's great news for many reasons! Hope you have some fun plans in store.

If you lose power, you can still find weather coverage of today's storm online and on social media. Please stay safe! 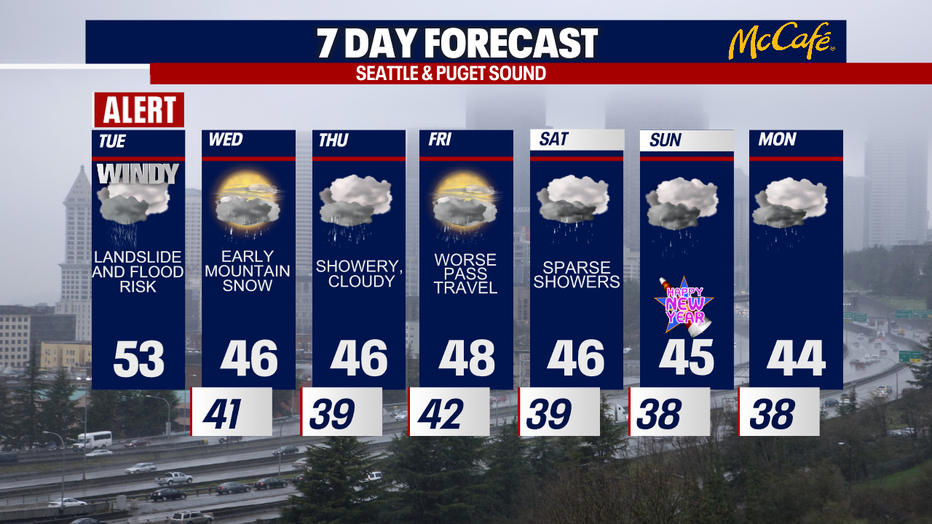