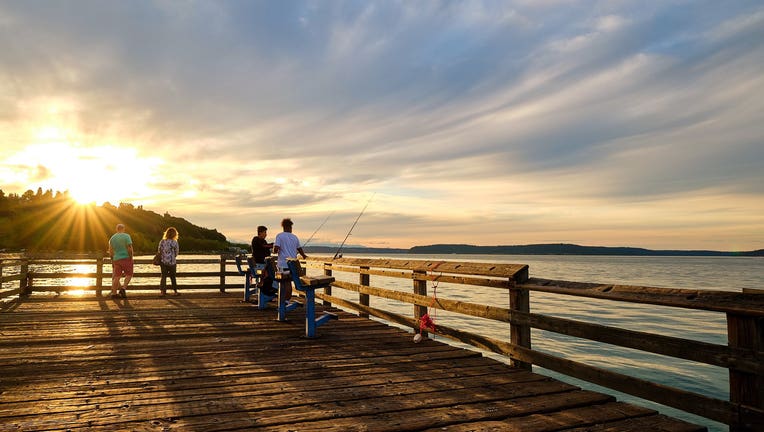 A pleasant evening on a dock in Tacoma. (Photo: Paul Marcoe)

SEATTLE - It's been quite the unusual summer so far around Seattle, from the historic heat wave in late June to a July that might rate as one of the most comfortable on record.

But what has been constant for sure around here is that it's been dry, frequently sunny, and rather temperate -- though not quite as cool as some other locations that are usually some 25 degrees hotter! It's led to some rather strange reversals on the summer weather scoreboards around the West.

Perhaps the top zany stat of at least July has been that Seattle has been sunnier than Phoenix and Las Vegas so far this month!

RELATED: There were puddles on my street, yet Seattle's dry streak officially lives on?!?

For Seattle, its sunshine levels are about on par with a typical July, but the Southwest's scores are highly unusual due to the strong monsoon season this summer that has brought multiple days of clouds and thunderstorms.

Miss the rain? Head to the desert!

It's not just the clouds but the rainfall that is coming along with the monsoon and continuing the trend of some rather reversed summer stats.

The storms in Las Vegas brought quite a bit of lightning with one bolt that struck the National Weather Service's radar tower, knocking it from service:

And in Los Angeles, an ultra-rare July rain from the monsoon was making "It's raining" trending on Twitter. How rare? The city gets measurable rainfall in July about once ever 10 years; the last time it happened was in 2015.

But it rained on Monday – just the second time in Los Angeles' records (that go back to 1877) that the city has received measurable rain on July 26th.

(Sounds crazy, but there are 19 dates on their summer calendar that have never had measurable rain recorded in the 144 years of weather record keeping there!)

Grab a coat in Phoenix?

OK not quite that extreme, but there was this unusual statistic from over the weekend: Seattle managed to be hotter than Phoenix! For one day, it happens on occasion when Seattle gets toasty and Phoenix has the monsoon, but over 3 days?

Don't worry they'll heat up back to the 100+ normals this week. The relatively cooler air has not been a factor in Vegas which has reached 100 degrees or more every day save for one in July.

Meanwhile, Seattle remains sunny and dry to keep our streaks going. Monday will officially marks 42 consecutive days without measurable rain at Sea-Tac Airport, which ties for 5th-longest on record!