The roller-coaster weather pattern affecting both coasts of the United States will continue Tuesday, with potentially record-cold temperatures in the West.

The roller-coaster weather pattern affecting both coasts of the United States will continue Tuesday, with potentially record-cold temperatures in the West and warm air moving into the East.

Most people have heard the saying, "If you don't like the weather now, just wait five minutes," and that's been especially true over the past several days. 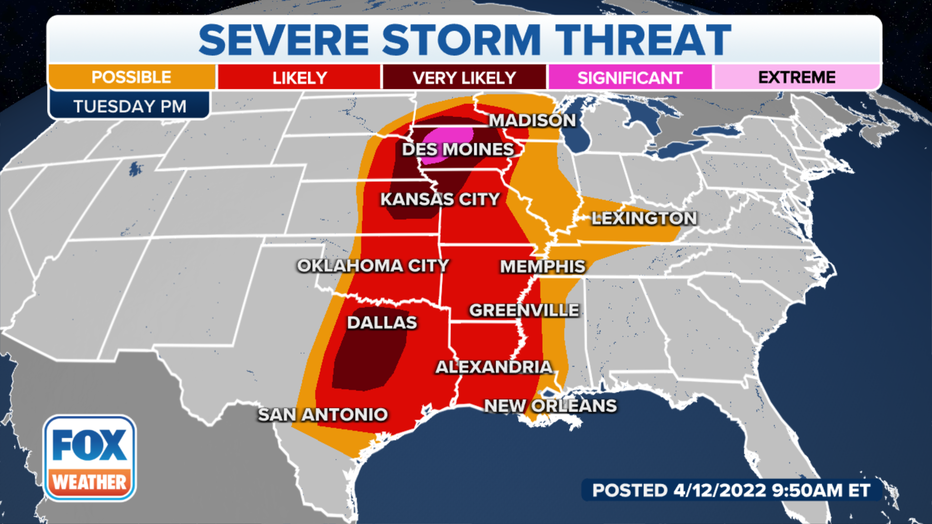 But let's start with another severe weather outbreak that will threaten the Plains, Midwest and South through the middle of the week that's expected to bring storms capable of spawning strong tornadoes, damaging winds and large hail.

This is the fourth such outbreak in four weeks.

The system already pelted parts of Arkansas with baseball- to softball-sized hail, as well as six reports of tornadoes in Arkansas on Monday night.

Showers and storms have continued into Tuesday but have mainly been below severe limits so far. However, that will change as we get further into Tuesday as the atmosphere becomes more and more unstable. 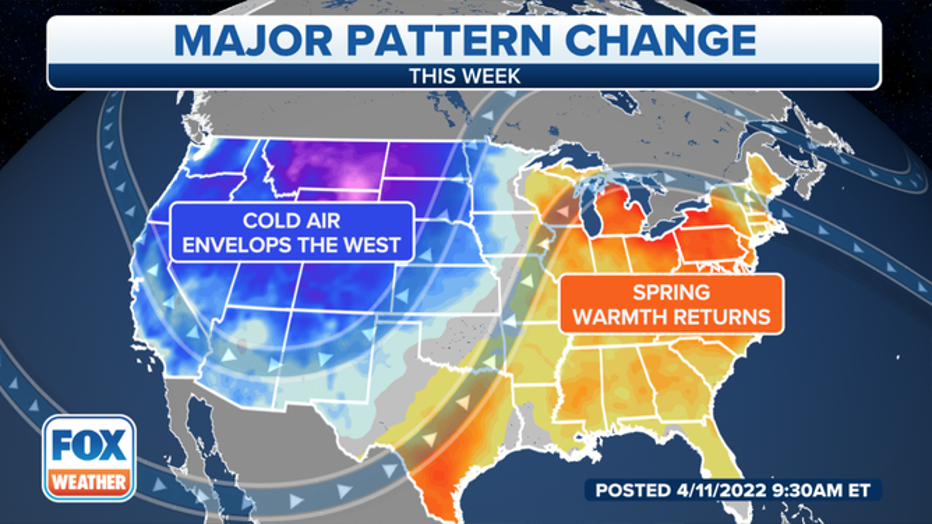 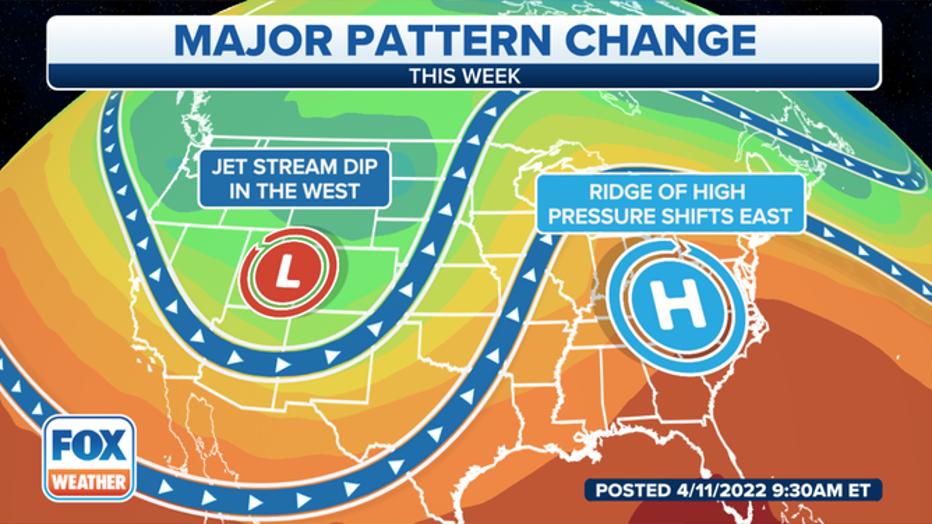 As the jet stream dips farther to the south through this week, colder temperatures are being pulled into the western U.S. from the north.

As a result, major cities across the region experiencing record-warm temperatures last week are expected to see some record-cold temperatures this week.

And that's not all. A major, late-season winter storm is expected to bring blizzard conditions to parts of the West and Plains. 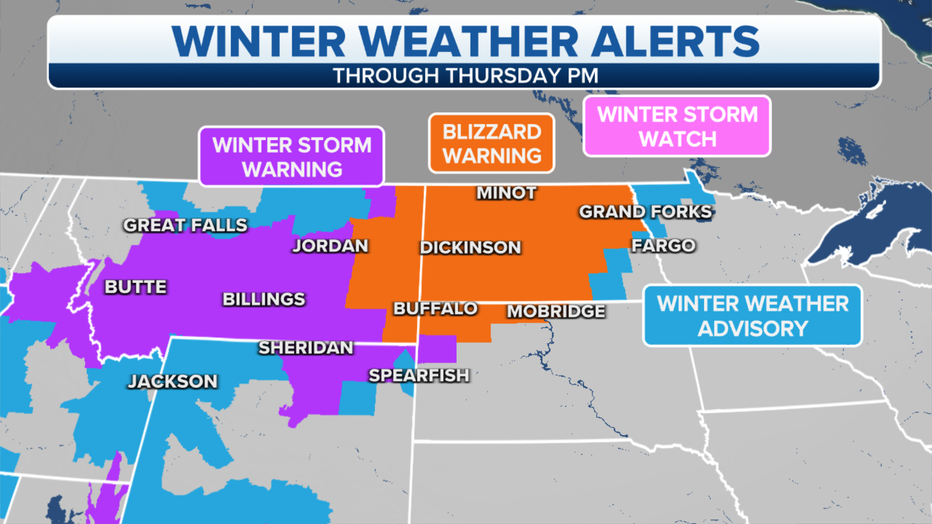 Various winter weather alerts are in effect across those regions.

Winter Storm Warnings are in effect elsewhere across the Rockies and into the Pacific Northwest. 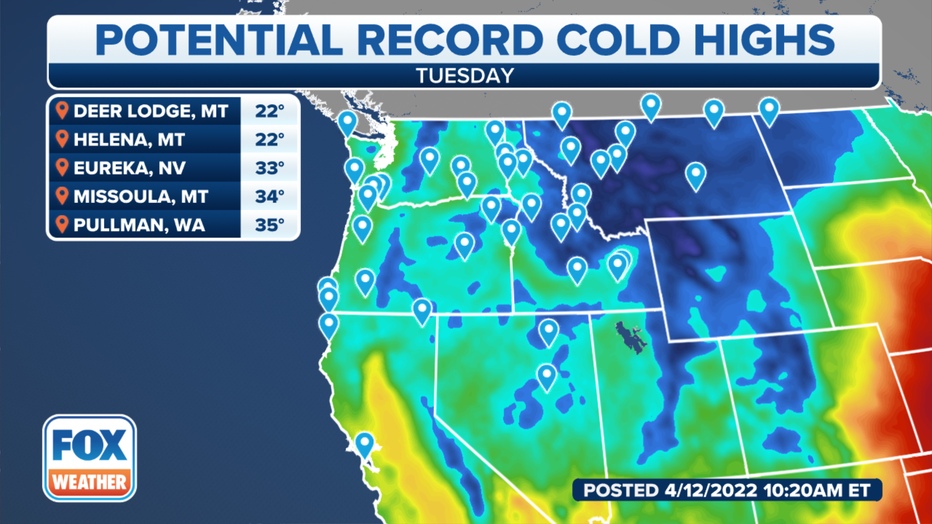 And there is the potential for some record-cold high temperatures across the region.

Deer Lodge and Helena, Montana, could see temperatures only reach 22 degrees on Tuesday.

Eureka, Nevada, and Missoula, Montana, will be just above freezing, while in Pullman, Washington, temperatures could only get into the mid-30s.

And the cold air is going to be sticking around for most of the week.

In fact, some areas of the Pacific Northwest, the Rockies and Plains could see temperatures drop to between 20 and 30 degrees below average for this time of year.

t's an entirely different story in the eastern half of the United States. A ridge of high pressure will allow the springlike temperatures to return to the region after several days of winterlike temperatures.

The South and Southeast will be the warmest during the week, as temperatures in some places like Memphis, Tennessee, could get into the lower to mid-80s on Tuesday.

The most extreme temperature increase will be felt in the Northeast and New England by the middle of the week.

In general, temperatures will be near or above average across the eastern half of the United States this week.