Showers expected in the next few days across the region

A front pushing into the Pacific Northwest overnight will drop widespread rain, gusty winds, and snow across the mountains.

SEATTLE - A front pushing into the Pacific Northwest overnight will drop widespread rain, gusty winds, and snow across the mountains.  This strong system triggers several alerts for the region. 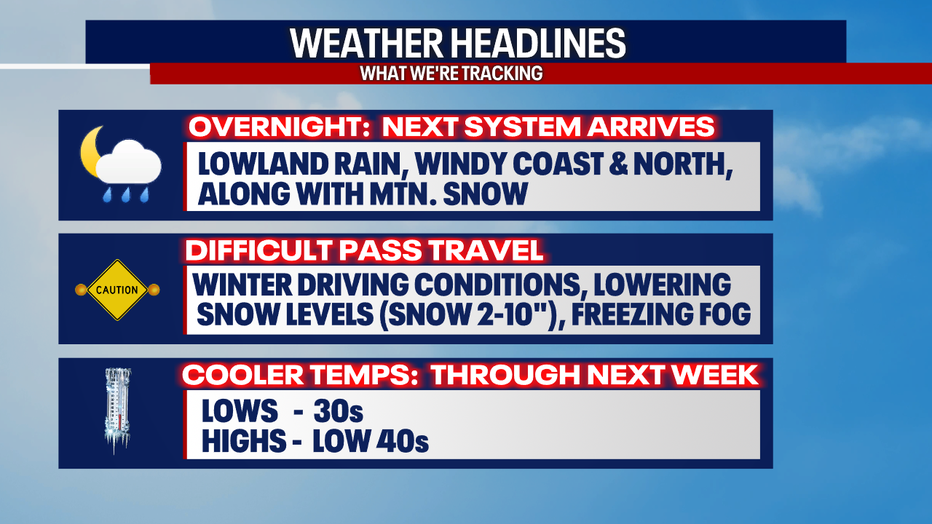 As rain moves in overnight, winds will pick up along the NW Washington coast, through the Admiralty Inlet, into the Islands, and both Western Whatcom and Skagit Counties. 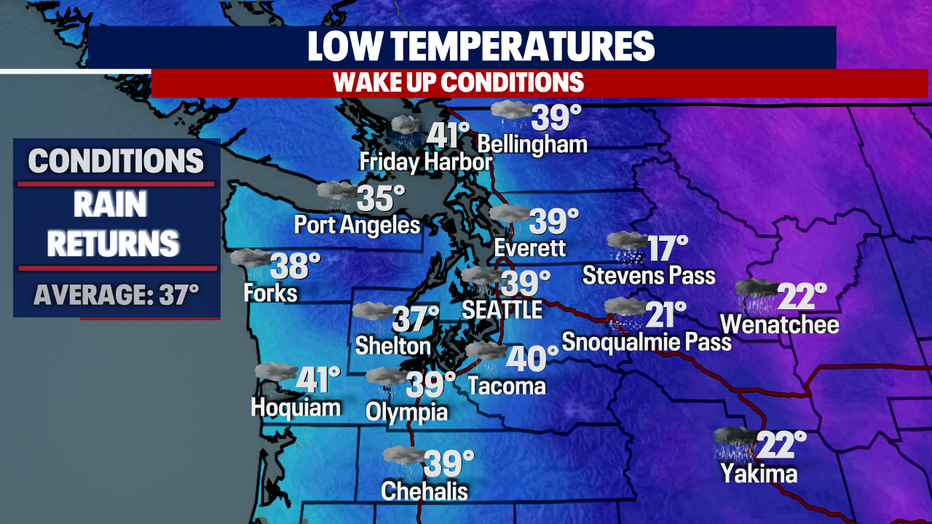 With snow levels lowering to near 1,500', pass travel will become difficult at times.  Know the roads before you go. 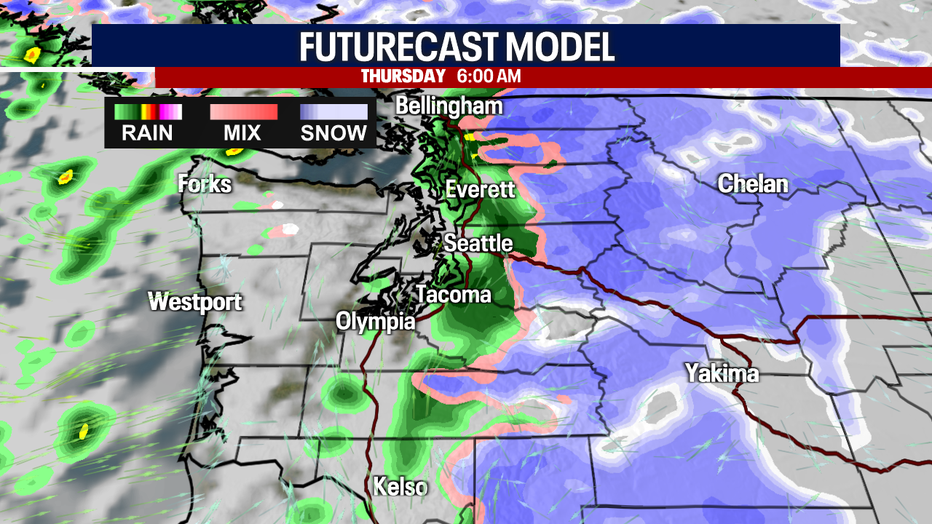 We do expect 2-10" of snow to fall above 1,500' throughout the Cascades and with that amount, a "Winter Weather Advisory" will remain in effect through 10 a.m. Thursday. 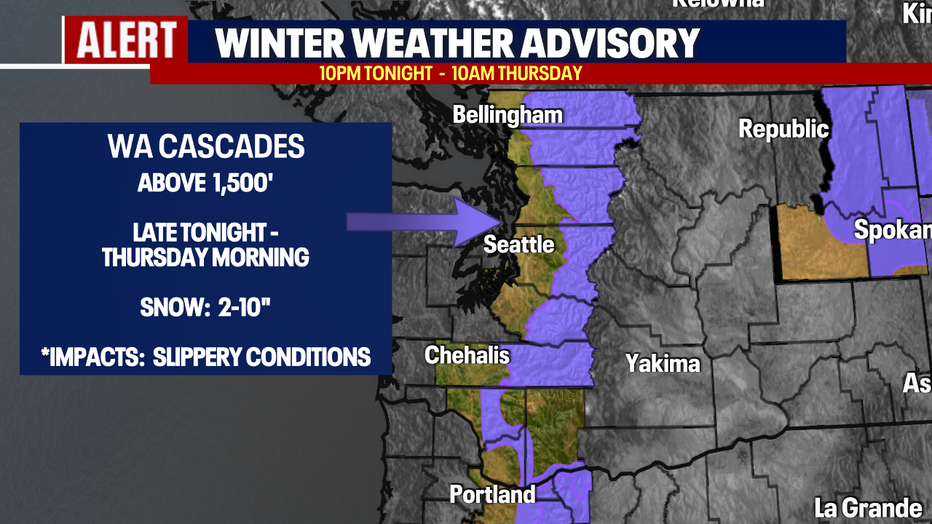 Visibility over the mountains will be extremely tough at times, especially as freezing fog develops east along I-90.  This is why a "Freezing Fog Advisory" stays in effect through 7 a.m. Thursday.

Drivers heading east into counties like; Kittitas, Yakima, Benton, Franklin, Walla Walla and portions of NW Columbia could experience visibilities down to a ¼ mile or less.

Drive with extreme caution during the early morning hours in order to avoid collisions like what happened early Tuesday as dozens of cars/trucks crashed on I-90 near Ellensburg, keeping the roads closed for hours. 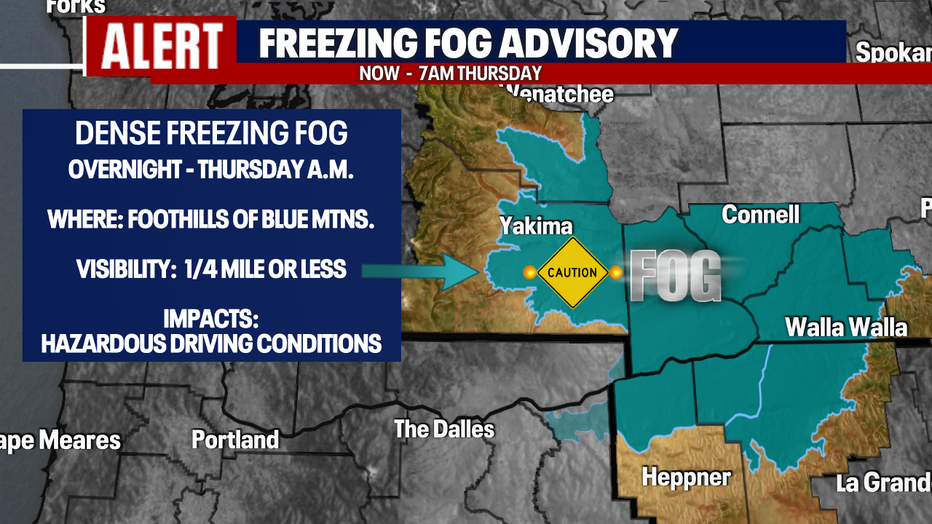 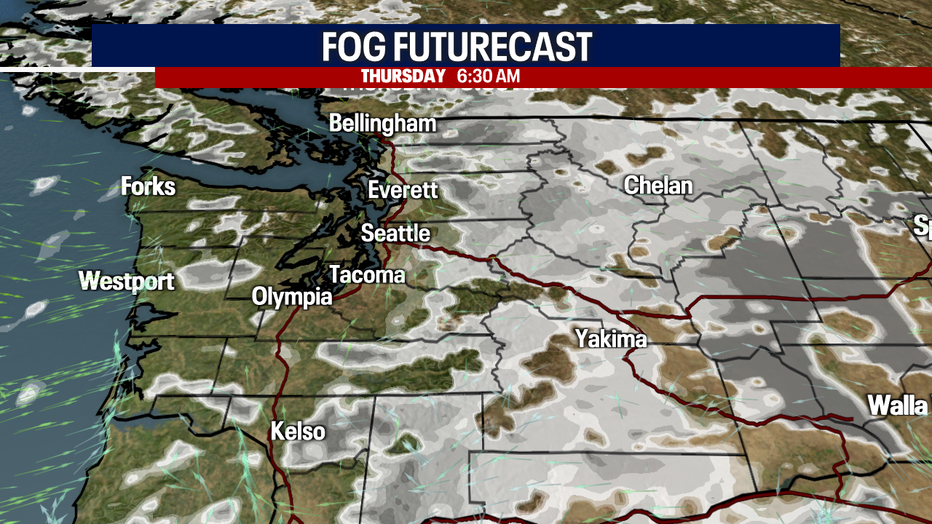 Winds potentially could gust between 40-50mph for areas along the NW WA Coast and North Sounds into early Thursday.  Wind Advisories are in effect for those areas through 10 a.m. tomorrow.

With gusts that high some may experience down tree limbs or trees along with some power outages. 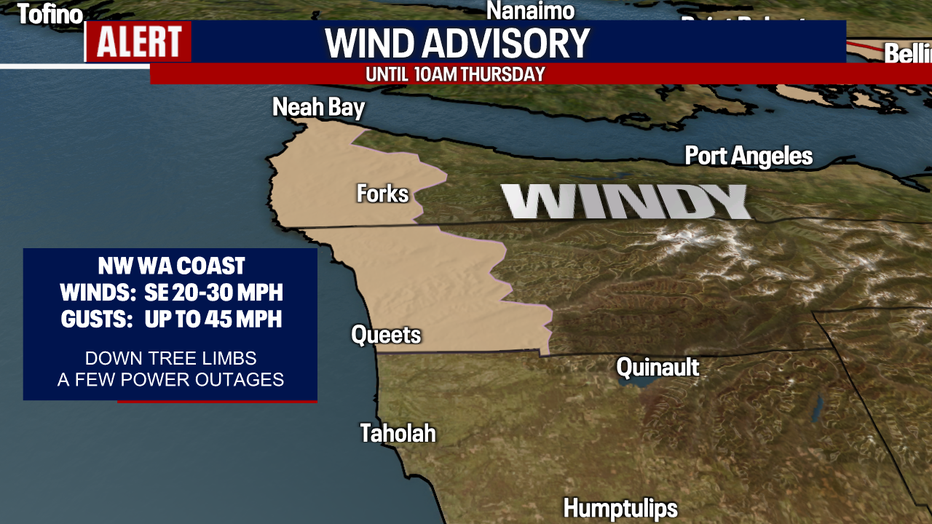 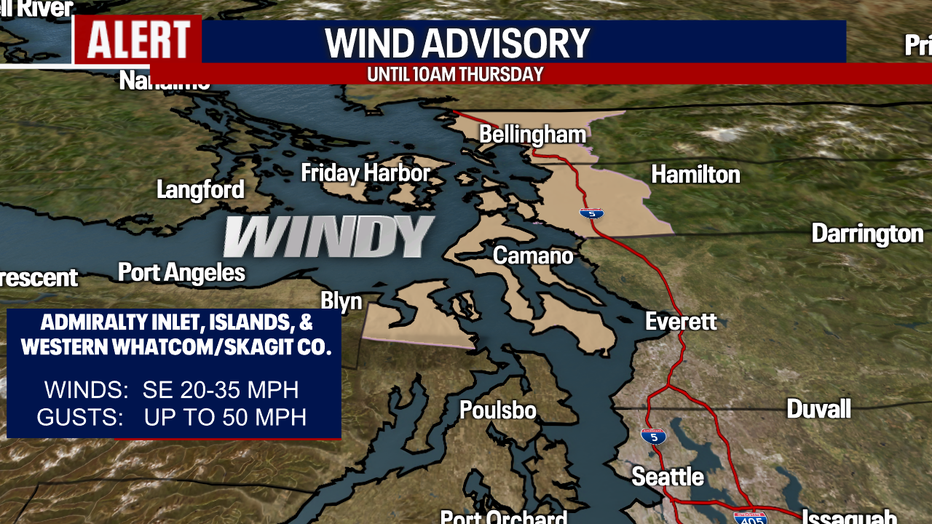 The majority of the lowlands will dry out pretty early. Look for on/off showers expected throughout much of Thursday. By dinner time, mountain snow will start to pick up again. 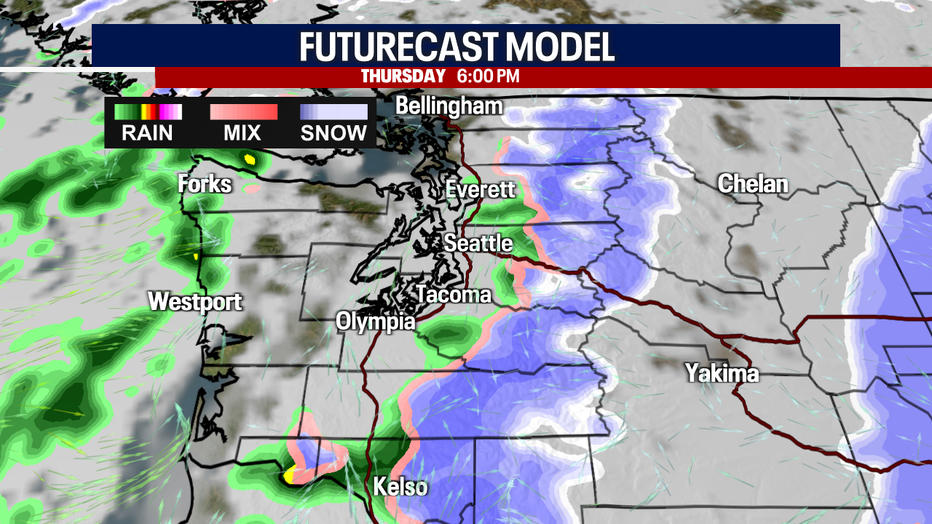 Highs Thursday land a touch cooler than average, topping out in the low to mid 40s. 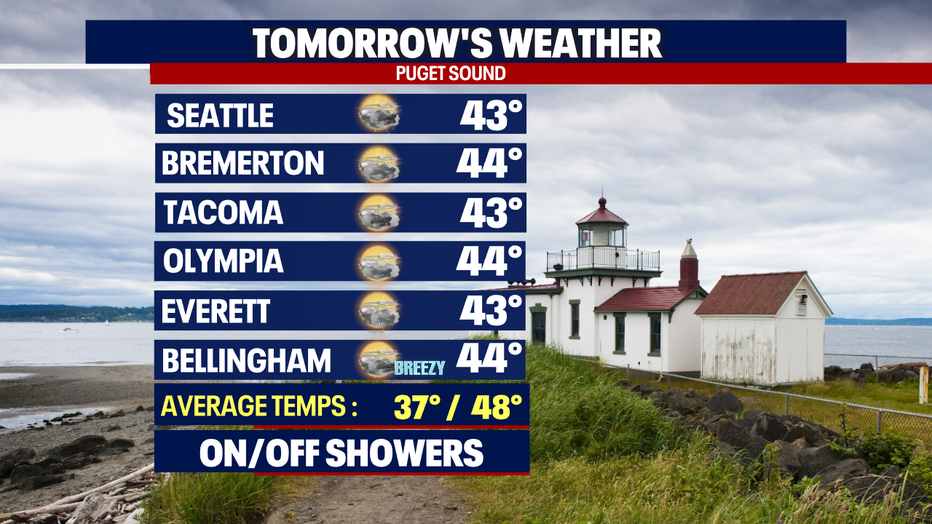 We'll see another system bring more widespread rain Friday night into Saturday.  Snow levels will drop to near 1,000' so some of us could flirt with a wintry/snowy mix as we get into early Saturday otherwise look for rain with highs in the low 40s.

Showers become spotty for Seahawks Sunday with the Panthers in town.  Kick-off from Lumen Field is set for 1:25 p.m. and you can catch all the action right here on FOX 13!

Have a great week all! ~Erin Mayovsky, FOX 13 Forecaster 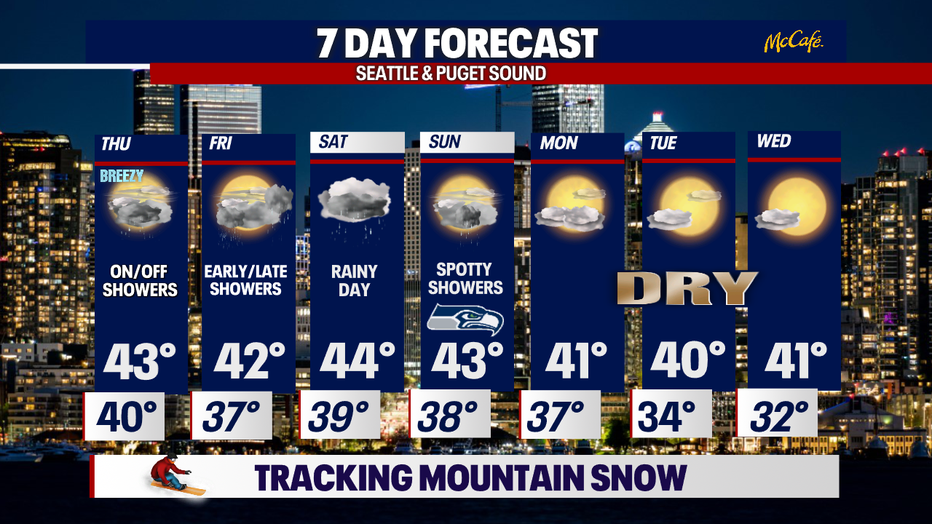 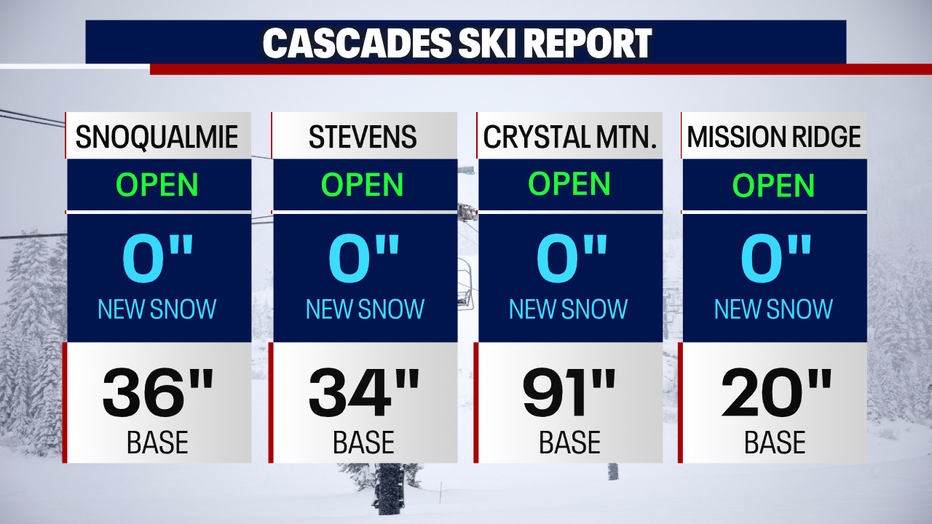 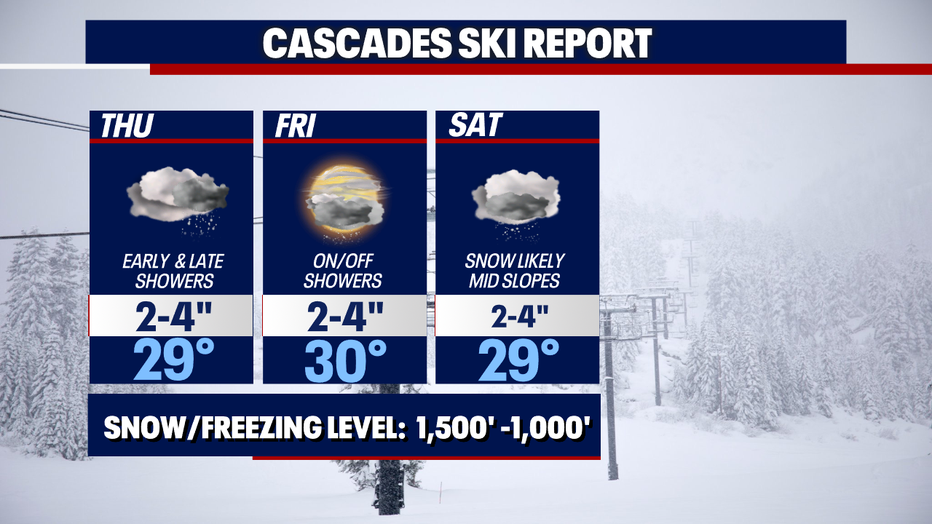