Our forecast is about to get pretty sloppy as we roll into Thanksgiving!  Overnight rain will push inland with temperatures slightly above average. 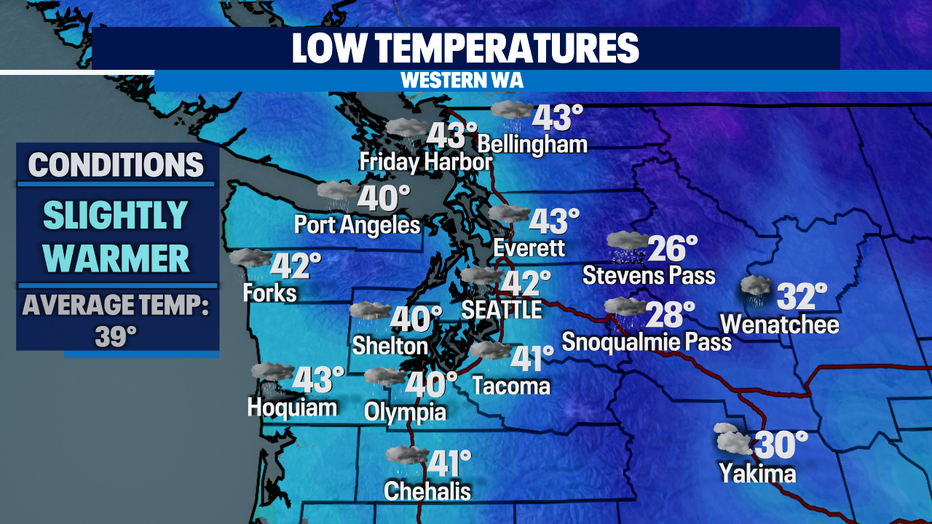 The forecast gets a little tricky especially for holiday travelers driving from Eastern WA to Western WA tonight into tomorrow morning. 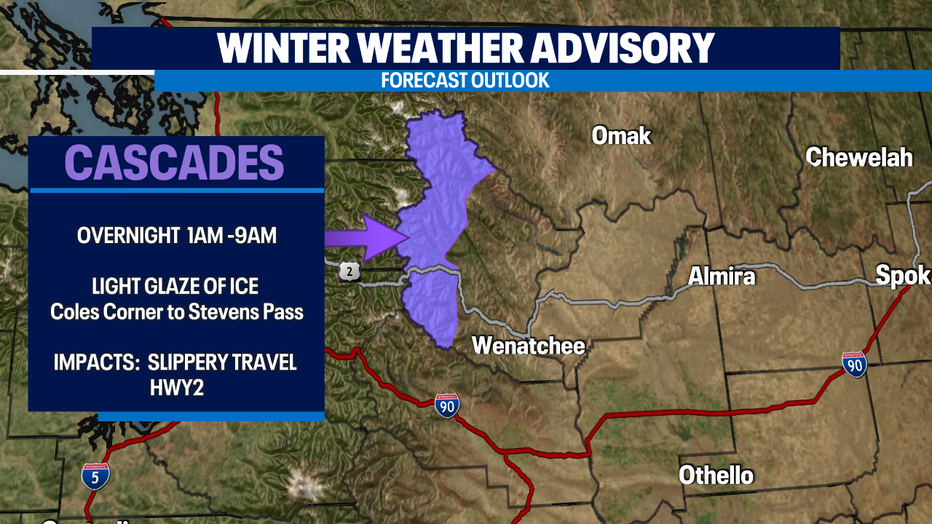 Across Western Washington, rain picks up out of the gate Thanksgiving morning as the first of three soaker systems swing into the region. The heaviest rain will fall along the Coast, the Olympics, North Sound, and Cascades. 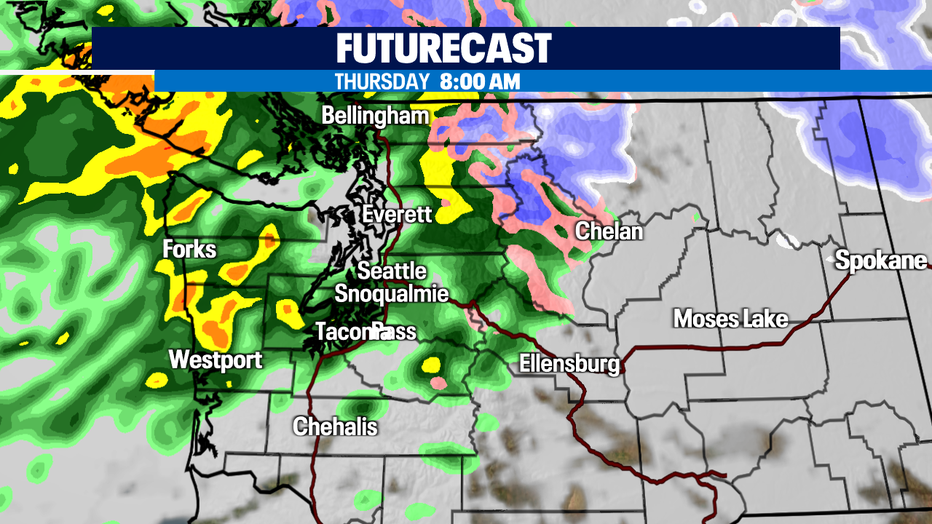 Not only will we see an excessive amount of rain, but winds will also gust too.  A "Wind Advisory" is now in effect through 6 pm Thursday for the Islands and North Sound. We expect sustained winds out of the southeast 20-30mph gusting between 35-45mph. 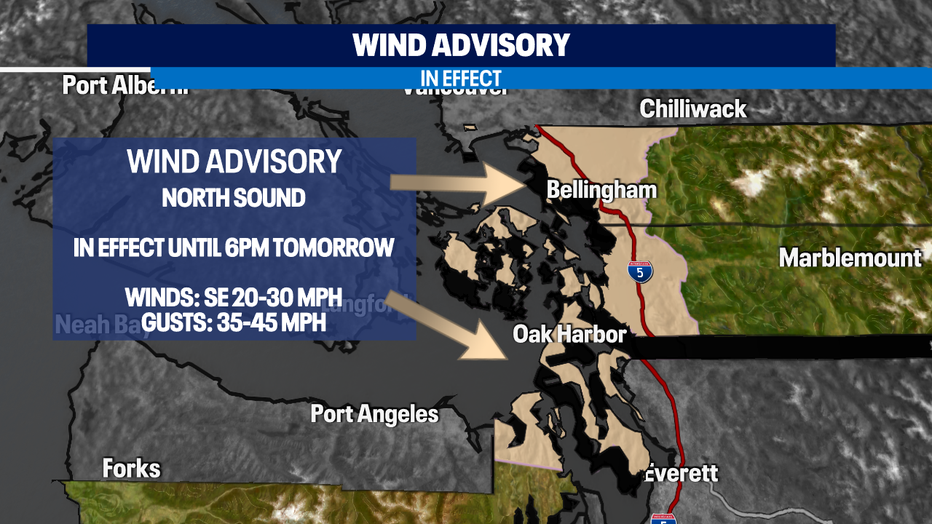 Here's a look at winds tomorrow afternoon across the region. The coast kicks up into the 30+ mph zone with winds up and down the I-5 corridor between 20-30mph, with stronger winds through the Islands. 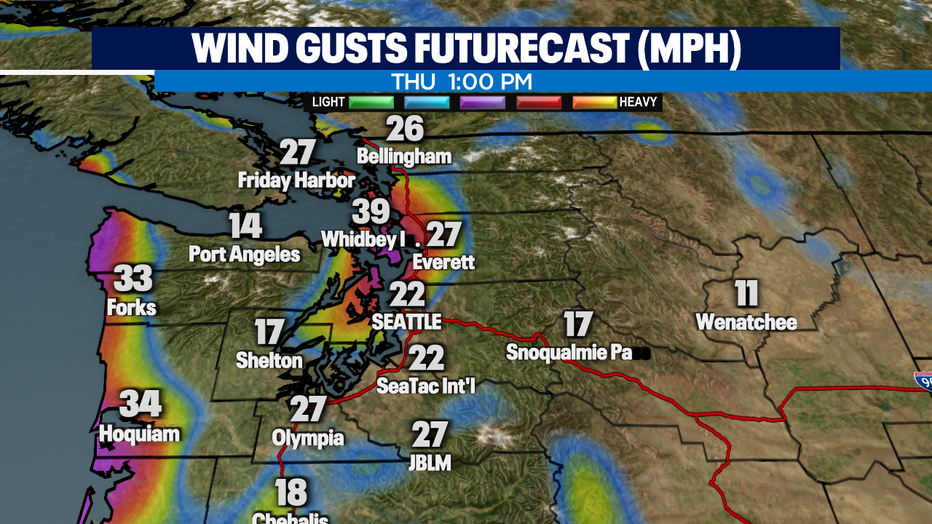 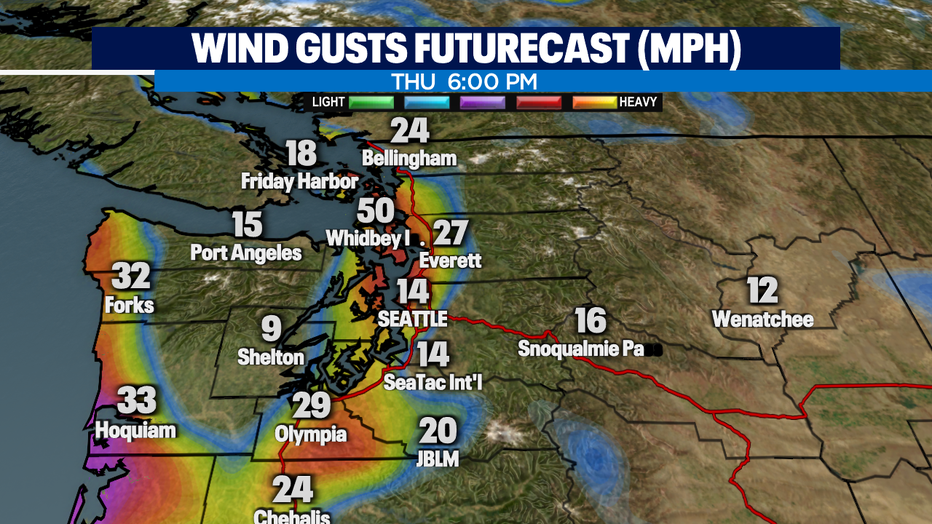 And the rain keeps pumping in through Thanksgiving into early Friday. The Coast, the Olympics, and the Cascades get hit the hardest with some juicy cells late Thursday night. 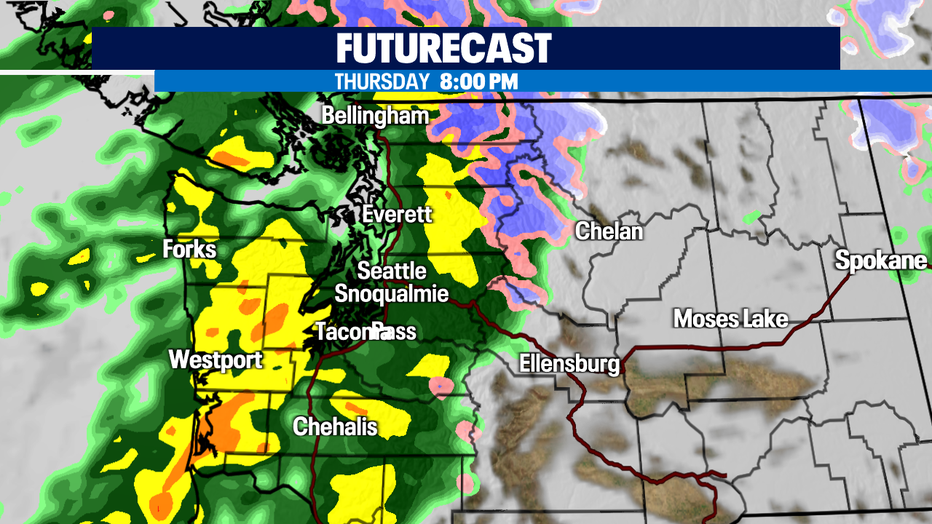 Not surprised a "Flood Watch" goes into effect Thursday through Saturday with so much rain on the way.   The first river to watch is the Skokomish in Mason County.  Other rivers will rise as well and we may see a few more pop up with an alert. 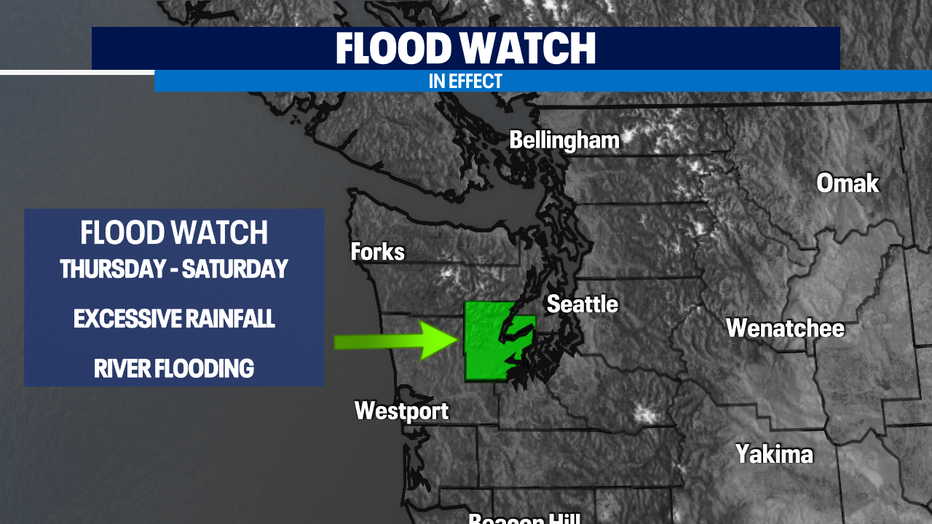 And if you can believe it as of now the Apple Cup at Husky Stadium Friday night looks dry with breezy winds.  #GoHuskies Kick-off temperature is near 52 on Montlake. 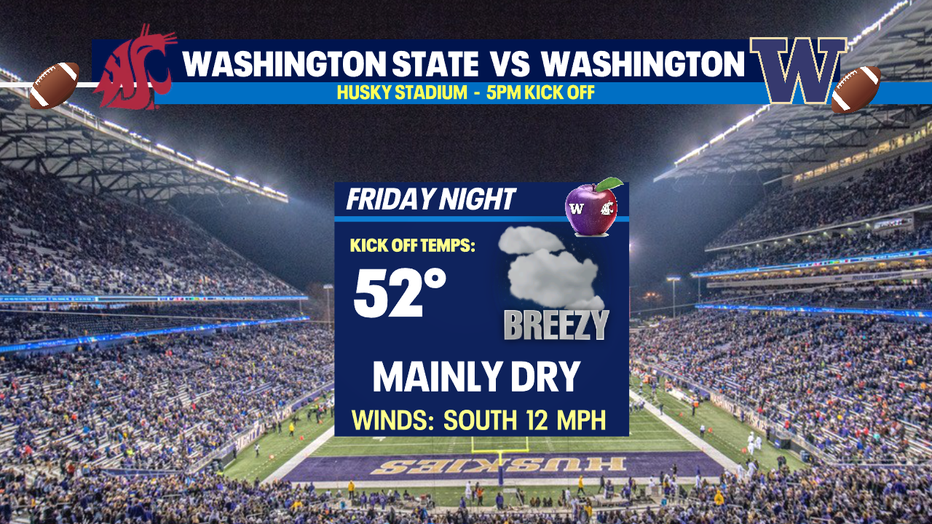 The brief dry break Friday into Saturday morning will be short-lived as system number two pushes in by lunchtime.  This rainmaker will mostly impact the Coast, the North Sound, and the mountains.  Most folks south of Seattle will see mainly dry conditions.

We get another break Sunday under mostly cloudy skies.  Highs warm into the mid-50s.

Rain hits again mid-day Monday with precip sliding in from the NW WA Coast dropping down into Puget Sound.  Highs hang in the mid-50s.  We'll dry out into the overnight hours with temperatures running well above average in the upper 40s.

Tuesday and Wednesday will be wet for the NW WA Coast, North Sound, and mountains again.  Everyone else should stay dry!  We shall see! Stay tuned!

Have a great holiday all!  ~Erin Mayovsky, FOX 13 Forecaster 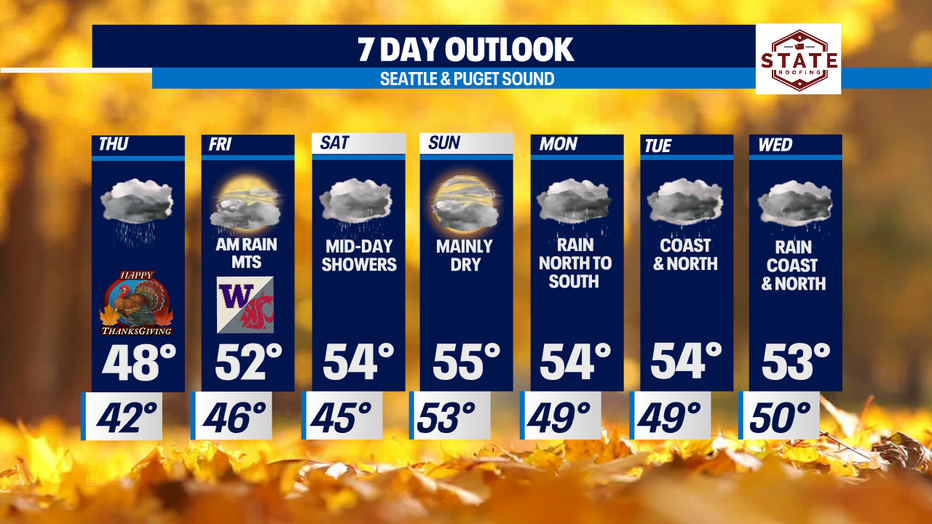 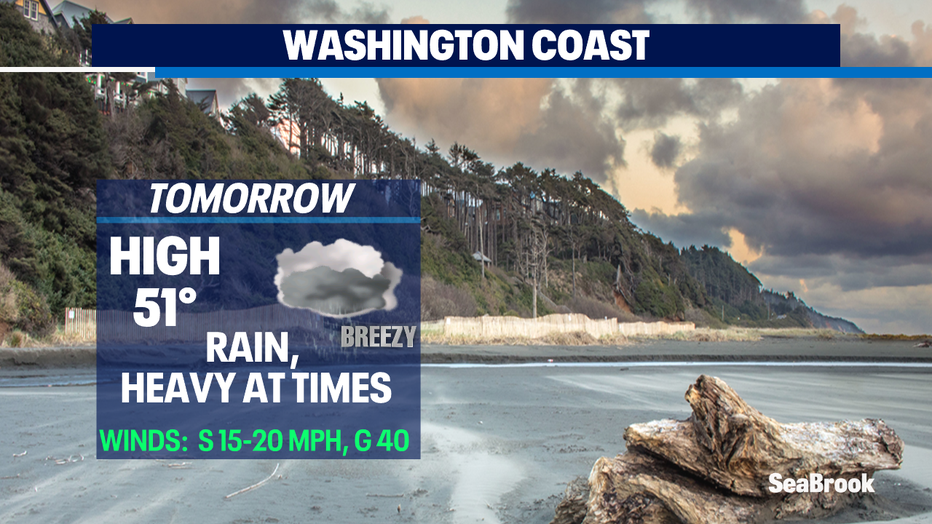 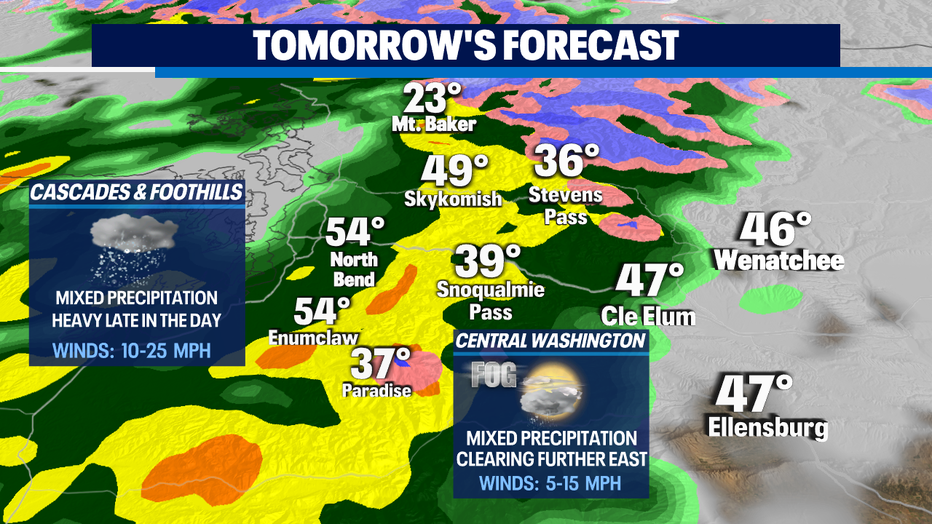 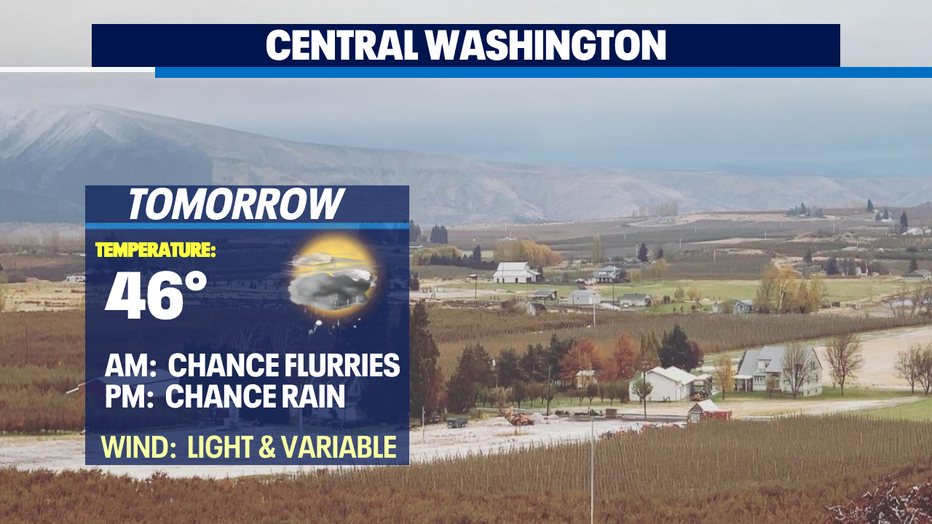